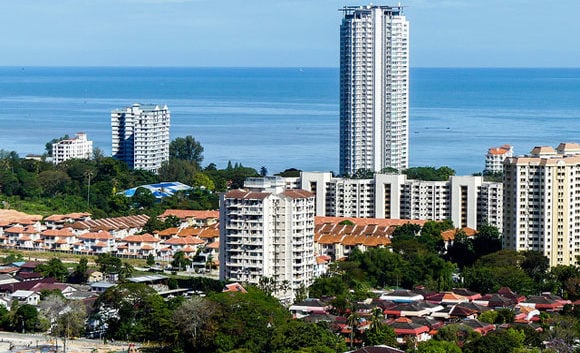 Malaysia is the most popular retirement haven for expats in Southeast Asia. People have been settling here since the late 1960s. Its beaches are second to none. Its islands, listed in various world surveys, regularly make it in to the top 10, and if you like jungle trekking and all of the fauna and flora that comes with it, Malaysia’s jungles and parks are some of the best and biggest in Southeast Asia.

Malaysia is in central Southeast Asia, and its neighbors, Singapore, Thailand, and Indonesia, are good places for a weekend getaway. Malaysia’s international airports have direct flights to Cambodia, Thailand, Vietnam, Borneo, China, Taiwan, India, France, London, and The Philippines. You could be sipping cocktails at the Foreign Correspondents Club (The FCC) in Phnom Penh, Cambodia, overlooking the Mekong River, in about two and a half hours.

What’s more, the cost of living is roughly three times cheaper than it is in the U.S., and as an added bonus, Malaysia’s street food is superb.

It has a fascinating colonial history dating back to the 16th century, and Malacca, a state in Malaysia’s south, was first colonized by the Portuguese in 1511. The Portuguese were quickly followed by the Dutch, and then the British—which now means that most Malaysian’s speak English. This mix of peoples and cultures adds a lot of color and different architecture and cuisine to the country.

Where to Live in Malaysia

Driving the length of Malaysia takes just six hours; it’s not a big country. The various towns that you will pass on the way, driving south to north, are Malacca, Kuala Lumpur, Ipoh, and Penang. All very different, they show parts of the country that have embraced its European influence, evolving with great restaurants and lots of interesting colonial hotels.

Where you live in Malaysia will depend on your lifestyle choice and there are a number of places for you to choose from. The center of Malaysia is covered with mountains that run completely through its center, south to north, starting just outside Kuala Lumpur and running all the way to the borders with Thailand. Peninsular Malaysia is also fringed with beaches, both to its east and west.

The largest expat populations live in Penang and Kuala Lumpur. Penang has plenty of beaches for walking and swimming, and if you have a boat, there are numerous marinas. Penang also has a mountainous range that allows for great trekking, bird watching, and walking. The Penang Botanic Garden is a favorite among expats, and most mornings and evenings it’s crowded with people power walking and practicing yoga and Tai Chi.

The big attraction to the island is its capital, George Town. George Town is a cosmopolitan city with restaurants, cafés, and art galleries. There is also a race course and Turf Club, as well as numerous other five-star facilities, clubs, and a plethora of expat organizations that offer various activities for their members. They include hiking, horse riding, golfing, day trips, quilting; mahjong, and pub nights with trivia quizzes. A few of the golfers have also formed breakaway groups who travel on a monthly basis into Thailand, just to try new courses.

Moving south from Penang is the town Ipoh. It’s in the center of Malaysia, situated two hours south of Penang and two hours north of Kuala Lumpur. Being an old mining town, a lot of its buildings date back to the colonial period. It also has a racecourse and a private five-star club that has a swimming pool and tennis courts.

Ipoh had a facelift a few years ago and now there is a budding café society. There are also boutique hotels and one five-star spa resort just outside town. It has a wonderful Sunday market and people from Penang often come here just to sample something a little different. The expats who live here lead a quieter existence than those of Penang and tend to be older and into the golf scene. There are a number first class courses, some just 30 minutes away.

Moving farther south (towards Singapore) is Malaysia’s vibrant cool capital, Kuala Lumpur—or KL—and the historic town of Malacca. These two cities are within one-and-a-half hour’s drive from each other. The expats who live here tend to either want to live in a big city or they want to be able to access a big city for entertainment or for work purposes.

Like Penang, there are a lot of clubs and expat organizations here, and consequently lots of things to do. KL is a bustling capital. There are concert halls, loads of art galleries, cafés galore, and numerous sleek, air-conditioned shopping centers. The expat community here is large, and is a mix of retirees and professionals.

Malacca doesn’t have the same sophistication, but it’s close enough to both KL and Singapore to make it attractive. It’s quiet, and most of the cafés in town close by 7 p.m. Expats who live here tend to travel to KL or Singapore for their weekends away. There are a number of golf courses scattered around the area, which expats tend to use five or six days a week.

Malaysia has a total of 878 islands. Most are uninhabited but there are a few that are worth your attention as they offer great weekend getaways.

Pulau Pangkor has a tiny expat population. Just two hours drive from Penang, it’s a hermit’s paradise. If you want to live completely off the grid (and there are people who do) this could be for you. But it’s not completely cut off from the world. The island boasts local cafés and beach bars where you can meet with friends.

Langkawi island has the largest expat population. It’s located in Malaysia’s northwest, just a two-hour ferry from Penang. This predominantly Malay island has stunning beaches and clear blue water, which is why there are five-star hotels scattered around. The expats here, for the most part, live on boats, and—as Thailand is just an hour away—frequently travel up and down the coast into Thai waters. When they aren’t traveling they mingle, and rarely leave the marina.