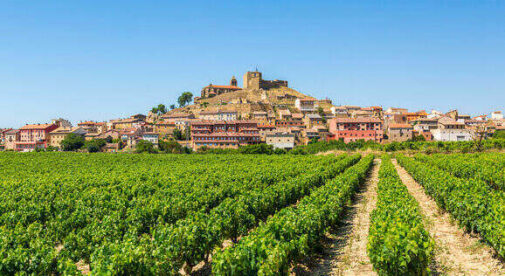 Haro is the city that is home to this unique tradition. ©iStock/jon chica parada

The clear morning air had been replaced by a thick, purple mist. Beneath my feet, the ground gave way to rivers of rich red wine, tumbling down the once-green fields of Mount Bilibio.

Chaos reigned in Haro, in the La Rioja region in Northern Spain.

Wine came flying in from all directions; launched from buckets and barrels, spraying from water-pistols and larger super-soakers. Drenched in wine from head to foot, I finally managed to push my way out of the purple chaos, which now resembled an energetic mosh pit.

I needed to take the perfect photo of the crowd from a tall boulder on the hillside. With some help from a tall Spanish policeman, I climbed up the slippery boulder and prepared my camera for the perfect shot of the crowd, only to find myself the star of the festival. I was the perfect target: the obvious foreign female trying to get a good shot. At once, jets of red wine drenched me from every direction as the crowd unleashed their water pistols, pesticide sprayers, and every other weapon of Bacchic warfare. Shooting back at the crowd as best I could and forgetting everything else, I returned to the shouting, dancing, crimson mass of humanity.

This was my first battle in the great Wine War.

Earlier that same day, June 29, I had woken up early in the morning to a surreal sight in Haro, the cultural capital of La Rioja. A thick morning mist lay low over the green hills of the wine country, while large crowds of people were slowly moving in one direction. Some looked excited and others a little nervous. Nearly every person wore the same ritual outfit: basic light white linen clothes. Some were making their way to the front line on foot, while others crowded into flatbed trucks, vans, and tractors, were heading the same way, to the Wine War.

Spain is a country of ancient passions and some of its oldest include food, sport, and festivals. All three are united in big and messy fiestas where the season’s food itself is the sport: the eggs and flour flying at the Chupinazo festival in Pamplona and the frenzied war of tomatoes at the Tomatina in Bunol are both international tourist attractions. However, the wine-growing region of La Rioja has its own answer, more obscure but no less spectacular: a battle where the ammunition is dry red wine. The annual harvest festival of San Vino, simply called Batalla del Vino by locals, is an ancient event that celebrates the Catholic martyrdom of St. Peter, but originates in far older, pre-Roman festivals that centered on religious ecstasy and the mysteries of wine.

When our group reached the foot of Bilibio, a surreal sight out of a feverish dream met me: a red-purple river of wine flowing down the hills, filling the morning air with its rich fragrance. A long line of purple figures came stumbling down, numbed into a state of shock from the wine’s overpowering effects. For all its riotous frenzy, the wine-crazed crowd seemed to have favorite targets: journalists, foreigners, and people with cameras. Since I visibly fit the latter two groups, although I was all three, I ducked and took cover behind one of my co-combatants to catch time to breathe. Out of nowhere, an intoxicating wave washed over my head, blinding my eyes for a moment, then leaving me sputtering and coughing; my “friend” Antonio, with a mischievous grin and a bucket of Gran Reserva, had attacked me from behind with friendly fire. Unlike some of the wine veterans, I hadn’t brought any goggles or protective gear, or even a hat. I was an obvious amateur, a first timer. Only my cell phone and camera, secured behind multiple plastic zip-lock bags, were protected from the all-consuming purple rain. I was left with no choice but to hold out and endure the storm.

San Vino is superficially similar to Spain’s other seasonal festivals, yet much of the atmosphere is different: smaller, more intimate, but also far more intense. The crowd loses itself completely in the ritual, becoming an ecstatic throbbing mass. For a short period of time, all rules are gone. And yet everything is peaceful and orderly at the same time. It is not what some may think of a wine “war”; no violence, nor injuries of any kind.

Like many other sacred festivals of excess, Spain’s food-fight events are fundamentally a religious expression, the ritualized release of pent-up energies. Like the ancient pagan festival of Saturnalia, where all norms disappeared and slaves changed roles with their masters for one day, the Catholic food fight is a form of collective catharsis. It embodies the age-old combining of the monotheistic and the pagan.

Once the quiet, hard-working people of La Rioja finish planting the year’s harvest, they let loose for one day in an incredible war of waste, before returning to their normal lives and another year of productive harvest. The delicate balance between the sacred and the primal is always difficult, but Spain keeps it well.

Where to Stay in Haro

If you are interested in attending this unique and energetic festival, then I have a couple of recommendations for where to stay. Keep in mind it is a busy time of year, so it’s a good idea to make reservations as early as possible.

This is where I stayed, and it hardly gets more boutique than this small hotel, located in a medieval building near the old town square of Haro. Overlooking the ancient town, in Mount Bilibio’s shadow, Wine & Soul Suites is ideally located near some of the world’s best vineyards and only an hour away from Bilbao. Rooms from $150 a night.

An abstract twist of steel against a lush background of vineyards, Frank Gehry’s hotel boasts its own private winery and is one of the most luxurious in the La Rioja region. Hotel Marques de Riscal, located close to the medieval fortifications of Elciego and less than two hours’ drive from Bilbao Airport, is rightfully famous as a place of sumptuous relaxation and wine-infused spa treatments. Rooms from $280 a night.

3 Vineyards to Visit in La Rioja

If you prefer to drink your wine, rather than wear it, La Rioja is a wine lover’s paradise and boasts some of the world’s best vineyards. While modern industrial methods are used to harvest grapes in many areas, some of Rioja’s finest vineyards have used traditional tools since day one of their operations. While you are in the area, spend a few extra days and visit some of these vineyards.

This vineyard is less than 20 minutes by car from Haro. It combines modern abstract design with ancient harvesting tools. Its wide, panoramic view of La Rioja’s green hills and lush vineyards is nothing short of stunning. Fascinatingly, the winery uses no modern machinery at all for pressing the grapes and moving the wine into barrels; everything is done by a vertical stepped terrace that relies on the force of gravity to complete the winemaking process. This creates a pyramid-climbing experience closer to architectural exploration than a traditional wine tour. You can take a short tour along the terraces to learn all about these ancient Basque techniques, then stop for a lunch and wine tasting at the restaurant near the top. Check them out here.

As well as being an ultramodern luxury hotel and an abstract work of architecture, the Marques de Riscal also has one of the Rioja region’s best private wineries. Don’t be fooled by the shining, surrealistic Frank Gehry designs of the hotel complex: Bodegas Marques de Riscal has produced red and white wines for more than 160 years. The half-day vineyard tours will lead you through the yards themselves, the ancient bottling and barrel rooms, and reveal the fascinating history and design of the complex. For a high-end hotel focusing on luxury experiences, Marques de Riscal’s specially tailored wine tasting session is surprisingly easy on the wallet: $20 for three reds, one white, and a plate of tasty, cured meats. You can read more on their website here.

As its name suggests, Campo Viejo is one of Spain’s oldest and largest winemaking bodegas. Unlike the more traditional alternatives here, Campo Viejo prides itself on combining ancient history and cutting-edge modern techniques of winemaking. More than anything, it focuses on innovation and environmentally friendly harvesting practices, resulting in a unique experience different from the more traditional wineries in La Rioja. The winery provides a large variety of specially tailored tours, from winemaking education to historical tours of the area, but the aging and barreling rooms are the undoubted star of Campo Viejo: home to more than 70,000 barrels of fine wine. You can book a visit to their winery on their site.