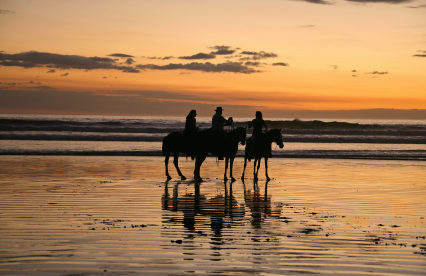 Long stretches of deserted and undeveloped beaches, on the Caribbean and Pacific Coasts…dense jungles teeming with exotic wildlife…towering volcanoes, lush green valleys, and hundreds of crystal-clear lakes, rivers, streams, and waterfalls… mesmerizing sunrises, sunsets, and star-filled evening skies…all these things, and much more, are drawing IL readers to Costa Rica.

Fair waring: What you’re about to read may change your overseas plans to focus on Costa Rica…and if you haven’t yet considered a move overseas…you’re about to be “Costa Rica’d.”

– Keith and Karen, in their early 60s, moved to Ojochal, in southern Costa Rica, from Toronto. They moved for the climate, exotic scenery, wildlife, friendly people and affordable, relaxing lifestyle. Keith, in particular, was tired of the traffic of a big city, the always-increasing costs, and the long, cold winters.

Karen says: “Our lives are less complicated in Costa Rica. We have made dozens of new friends, we have a beautiful home in the mountains overlooking the Pacific, and we’re surrounded by exotic plants and wildlife. We don’t need heat or air conditioning—we have ocean breezes during the day and mountain breezes at night. Howler monkeys are our alarm clock. Local beaches are pristine. Fruits and vegetables, and amazing fresh fish are delicious. We both feel rejuvenated.”

– The last New Jersey snowstorm that Janet suffered through was what did it. She decided to become a “snowbird”—someone who spends the winter months in a warmer destination.

She chose a little village on Costa Rica’s Pacific Coast: “I just started my Costa Rica life. This is my ‘try-out,’ my practice life abroad, and I am sucked wholeheartedly into its spell…”

– Geraldo and Carolyne from Georgia have big plans for Costa Rica. They have kids in Miami…and Costa Rica is a quick and inexpensive flight from there. Running their own farm is a dream within reach in Costa Rica.

“The cost of labor is low here,” Geraldo said, “so I figure we can easily afford to hire some helpers…both inside and outside the house.”

Perhaps the most inspiring story is from this California couple who went from stressed out in the U.S. to healthier and happier than ever before in Costa Rica.

Everything you Need  to Know About Living in Costa Rica