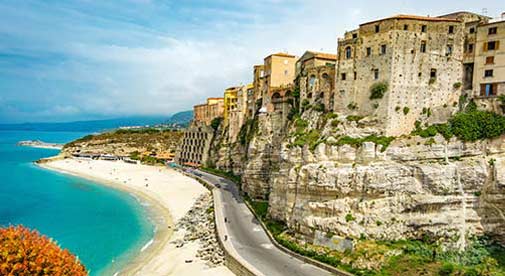 Calabria is an undiscovered gem at the extended foot of Italy, just a little bigger than the state of Connecticut and the nation of Montenegro. It is mostly surrounded by coast and reaches 1,955 meters at its highest inland points. The region is a mixture of cultures from ancient Greece to Bourbon Spain and France, unto Italian independence in the mid-19th century.

Calabria offers places of beauty and historic interest, extensive woodlands and lakes, varied physical activities for all age groups, delicious food and wine, and an outstanding community spirit in its towns and villages. Thanks to considerable infrastructure investment in recent decades, Calabria is poised to welcome foreign visitors. The region is accessible from airports at Lamezia as well as Reggio Calabria, Crotone, and Scalea. Calabria is best explored by car though train lines run along the coast and cross inland via the two major cities of Cosenza and Catanzaro.

Walk in the Raganello Nature Reserve

Raganello is a protected natural area over 3,953 acres in the Pollino National Park in northern Calabria. Pollino is one of three national parks in Calabria and is spread among 56 towns and villages. Among those is the charming hill town of Morano Calabro. At the Raganello canyon you can walk along the valleys, gorges, bridges, and streams enjoying the multi-colored rocks, flora, and fauna.

In July and August, this diverse western coastal town, like others, offers a festival of entertainment from music and dance to fashion parades. Since the 1980s, in early August Cetraro hosts a fanfare of sports competitions between the town districts preceded by processions and food fairs hosted by the competitors. For the more spiritually minded religious festivals take place throughout the year.

Calabria’s extensive coastline and pleasant climate makes sailing a pleasure, ideally from April to October. There are 12 marinas located evenly along both coasts. Vibo Valentia is among the best sailing ports in Italy. Vibo has berths and excellent facilities for 90 yachts including dock areas for all types of boat, all sheltered by large concrete jetties. In Vibo and other Calabrian ports, such as Tropea, Cetraro, Reggio, and Crotone, it is possible to charter a yacht and learn to sail.

Rest on the White-Sand Beach at Tropea

Tropea is Calabria’s best known resort. It is an hour or so by car from Calabria’s main airport, Lamezia. Tropea’s economy is well prepared for tourism from June to September. There are a range of top restaurants, guest houses, hotels, and camping facilities in and around the historic center. Tropea’s beaches, located below a magnificent cliff and an island sanctuary, have been voted among the most beautiful in Europe.

Beyond Calabria, it is worth visiting the Aeolian Islands about 60 miles or a three-hour boat-ride from the ports of Reggio and Vibo Valentia. This archipelago consists of eight islands over 52 sq. miles. Lipari is the nearest and largest island with four villages and an archaeological museum. The neighboring islands of Stromboli and Vulcano are actively volcanic, have the best views, and offer open air sulphurous water spas.  The Aeolian Islands are a UNESCO World Heritage Site.

Stilo, towards the toe of Calabria, hosts one of the best examples of Byzantine churches in Italy. It is said that the four Greek columns in the church, were carried by young maidens through divine intervention. Stilo is also home to the well-preserved ruins of an 11th century Norman castle reminding us that southern Italy was once under their rule. For its historic associations, Stilo is one of 13 towns in Calabria which enjoys special Italian Tourism Council status.

Calabria’s foremost museum is home to important artefacts mainly from the Magna Graecia (Greater Greece) era in the 4th to 8th centuries BC. Preeminent is the world renowned two meter tall statues of Greek warriors dating from 450 BC and discovered by chance just off the coast at Riace in 1972. While in Reggio, sometimes known as the ‘city of bergamot’, stroll its famous promenade and visit the Aragonese castle, cathedral, theatre, and villas.

Visit the Classical Sites Along the Ionian Shore

Calabria’s formative cultural influence was ancient Greece. Its major colonies were located along the Ionian Sea coast of Calabria. Today, they are represented by archaeological sites and museums displaying ancient houses, temples, amphitheaters, mosaics, and local coinage. Travelling from the south is the major town of Locri, and just north of that is Caulonia and Scylletium, near Borgia. Further up, is Crotone, which was the most important city in Europe famous for doctors, Olympic athletes, and the mathematician, Pythagoras. Furthest north is the rich colony of Sybaris. The English word sybaritic or opulent luxury is derived from the city’s name.

Calabria is famed for its production of porcini mushrooms, bergamot orange, and olive oil. Calabria’s cuisine is typically a mixture of pork, lamb, sausage, swordfish, sardines, cod, and eggplant, often preserved in olive oil. Local desserts are honey sweetened pastries and baked treats. Other specialties are Provolone and Pecorino cheeses, red onions, and liquorice. Calabria is also lauded for its red and white wines.

Every Calabrian community is host to restaurants catering for diverse international tastes. Three of the region’s Michelin rated restaurants can be found in and around the city of Catanzaro.

Go Skiing at Lorica in the Sila Mountains in Winter

It may be unexpected to go skiing in a region where temperatures average over 86 F in summer. However, Calabria offers four skiing locations mainly in the central Sila Mountains as well as Aspromonte. Lorica, overlooking Lake Arvo, is just over an hour’s drive east further inland from the city of Cosenza. It offers the four highest slopes at 1405 to 1877 meters over 12 miles up to advanced level. In summer, these resorts provide an Alpine style setting of wild flowers, grazing animals, and fresh water.

Lecce: The Florence of the South