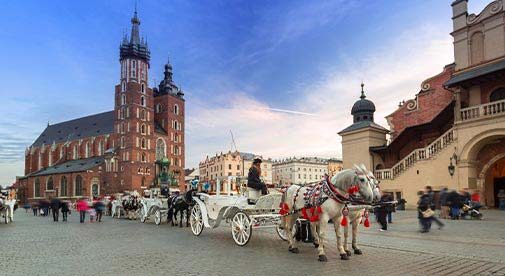 Krakow, Poland’s second largest city, has become one of the ‘must see’ cities of Europe. While most of the major cities of Eastern Europe suffered damage during WWII, Krakow remained mostly untouched. The old town contains many unique architectural wonders to explore and enjoy. The food is fantastic and the nightlife is active, varied and lively.

The center of Krakow is more than just the big square and the Cloth Hall. The streets leading off surprise the visitors with wonderful delights. In 1978 it was designated as the first UNESCO site. There are churches, architecture wonders, bars, museums, and strange little shops. Soak up the sun with a beer in one of the little squares. Enjoy local food and entrainment. Take a free walking tour. Enjoy the atmosphere.

You have not seen Krakow unless you have visited the largest medieval city square in Europe. Built in the mid-thirteenth century after the Mongols had destroyed the city in 1241. The square is the heart of the Old Town. Around the square, you will find outdoor restaurants, markets, St. Mary’s Basilica, museums, statues, art works, the Town Hall, and the 15th–century Cloth Hall.

3. Take a Peaceful Walk Around the Old Town in Planty Park

200 years ago, the crumbling walls surrounding the city were torn down and replaced with the park. The two-and-a-half-mile walk contains flowers, monuments, statues, and fountains. Locals and visitors find it a shady retreat from the bustle of the city.

4. Shop at the Cloth Hall

Described as the world’s oldest shopping mall, the Cloth Hall has hosted traders for over 700 years. Back then they traded fine silks and spices from the east and textiles and salt from Poland. Now you have dozens of stalls selling amber, lacework, and souvenirs at reasonable prices. The architecture is magnificent and the shopping, fun.

5. Walk the Last of the City Walls at St. Florian’s Gate

Just beyond the main square is the last of the city gates, well preserved now with its 14th century gothic tower and several hundred meters of city wall. Beyond the gate is the Barbacon, a defensive fort used to protect the entrance to the city against the Ottoman Turks. A walk around these will give you a good idea of the city defences of five hundred years ago.

6. Check Out the Churches

Krakow is full of breathtakingly beautiful churches. The most popular is the 15th century St. Mary’s Basilica overlooking the main square.  The carved altar piece, stained glass, and blue starred ceiling are awe inspiring. Don’t miss the trumpet call from the tower every hour. In the summer the tower is open to climb for a great view of the square.

7. Poke Around One of the Many Produce Markets

If you have a kitchen in your apartment, you can find great seasonal fruits and vegetables to cook in the many farmers’ markets spread about the city. Stary Kleparz is only a five-minute walk from the main square. If cooking is not an option, buy a couple of jars of local goods as souvenirs or presents. Either way, the colors and the crowds make a visit well worth the time.

Built on top of a limestone outcrop over the river, the castle has evolved over 1,000 years into this spectacular edifice. Buildings were added in a variety of styles over hundreds of years. The castle has been the residence of the Kings of Poland. The cathedral was where they were crowned.  The museum, opened in 1930, has incredible displays of art, textiles, sculpture, armor, porcelain, and oriental art. This is a Krakow ‘must see’.

In the square sit and enjoy the tastes of Poland while you watch the horse-drawn carriages and the street entertainers. Look down the alleys, in the back streets, and in the basements for bistros, bars, and restaurants serving tastes from around the world. You will not be disappointed.

Polish cuisine is varied and very flavourful.  Here are a few ‘must tries’. The dumplings known as Pierogi can be filled with almost anything from meat to potatoes. Sauerkraut stewed with chopped sausage, mushrooms and onion is known as the tasty Hunter Stew. Another unique local favorite to try is the sour soup called Žurek.

Krakow is a city of museums and you cannot go far without finding one. Inside the Cloth Hall is the very popular 19th Century Polish Art Gallery. Something unique is the multimedia Rynek Underground museum of medieval history underneath the main square. Other places of interest include the pharmacy museum

12. Look Around the Jewish Quarter

Before WWII 60,000 Jews lived in Krakow, making up about one quarter of the city’s population. They contributed greatly to the culture and social life of the community. At the end of the war, after the Holocaust, only 2,000 remained. Visit ul Szeroka, the old town square, 500-year-old synagogues, the ghetto, and Plaszow concentration camp where Oscar Schindler had his factory.

13. Tour the Wieliczka Salt Mine

The mine produced table salt for over 700 years. It is now a national historic monument attracting over a million visitors annually. The 178 miles of tunnels and chambers contain four chapels and dozens of statues carved by the miners. There is even an underground lake.

14. Be Overwhelmed by the Auschwitz-Birkenau Concentration Camp

Most people are aware of the history of this place where over 1 million people, mostly Jews, were murdered and cremated by the Nazis during WWII. Many will find it too disturbing to visit, but those that do come away with a sense of the magnitude of the emotional resonance.

15. Visit the Church of Saints Peter and Paul

There are too many churches to see them all but one that should not be missed is Saints Peter and Paul. The largest church in the old town has a front fence topped with statues of the apostles and Mary Magdalene. The church is known for its classical concerts using the magnificent organ. The weekly display of the longest Foucault pendulum in Poland is a unique experience.

These are only a few of the many sights to be experienced in Krakow. It is impossible to see all the wonders of this medieval Polish city, one of the best preserved in all Europe, in only a few days. It takes time and a few visits to really get the full flavor of this lovely city.