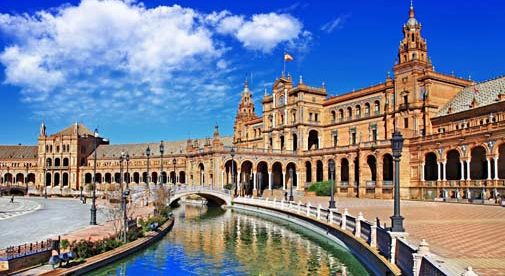 Seville, in southern Spain, is a vibrant city full of ambience, which evokes the past with Moorish and Baroque style architecture and a lively culinary scene. It was my pleasure to get lost in this magnificent city, not in direction but in adventure.

I am directionally challenged, and I am consistently getting lost. So, this was one of my biggest worries when planning my trip to Spain. There were 10 other people going, but I was going to have to get around by myself at some point, and that petrified me. I had images in my head of getting on a bus and ending up in France. I speak so-so Spanish, but reading a map, well I wasn’t holding out much hope for the map my friend got for me.

But getting up and heading out early in the morning to Flamenqueria Sevilla, my flamenco class, before some of my group had even fluttered an eye, had me finding my way alone in Seville almost right away.

The streets in Seville are narrow and winding, some with very little signage, so my handwritten notes were invaluable on the first day. After a 20 to 25-minute walk through my corner of the historic center of Seville, El Centro, and then through the bordering district of El Arena over the Isabel II bridge to Triana, and through a few more winding streets I arrived at my class.

Flamenqueria Sevilla was my dance studio for the week, a beautiful and modern space with both Spanish and English speaking staff, my classes were taught by the legendary Mercedes Ruiz and were surprisingly only $140. Getting there was easy but I also had to get back home. That meant reversing the directions in my head. This meant trouble.

So, I did something daring. I decided to enjoy getting lost. After my first day of class, I walked around Triana, strolled through the colorful aisles of the Mercado de Triana, looked in little mom-and-pop shops, stopped and ate some lunch at a cute little outdoor cafe, and leisurely made my way back to our villa. I figured if I got really lost, I would simply ask for directions, reciting from my pre-made cheat sheet of things I thought I may need to say in Spanish; “estoy perdido” (I’m lost).

Yes, I decided to enjoy stumbling upon a hidden gem of a shop, like Ceramica Santa Ana, with its vibrant display of hand-painted tiles, pitchers, and dishes. I would enjoy sitting by the Guadalquivir River and watching all the activity around me; the lone fisherman or the group of kayakers. I would venture into the small, unknown flamenco stores and talk with the elderly ladies who hand made everything they sold. I would walk along the confusing corridors and streets until I happened upon something exciting. I decided to take it all in, no matter what. I decided if I was going to lose time in Spain, I would lose it happily. And I did.

Along my path, I met lovely people. One day, I stopped to have a solo meal at a beautiful tapas restaurant called Mariatrifulco, near the foot of the Triana bridge. You could eat indoors but I chose to sit outside, under the umbrella-covered tables they had set up along the river. The food was delicious and simple. I had sangria, gambas al ajillo (shrimp in garlic sauce), olives, and tomatoes with cloves of garlic and an olive oil drizzle. And, of course, a basket full of bread. It was so refreshing under the hot Sevillian sun and the price was very affordable—only $25 for all of it. The soft-spoken man who waited on me very politely picked up my bags and shoved them under the table, uttering something in Spanish I could only half guess was that I should keep my belongings secured from being taken.

Another day, I stopped by Churreria los Especiales, the small and inconspicuous churros and chocolate stand I had passed several times before near the bridge. They made the churros right in front of me as the delicious smell permeated the air. I was soon in a quandary, however, when they told me they only accepted cash and I didn’t have enough money with me. The very friendly, elderly owner and his son then offered, in Spanish, for me to take the churros and chocolate, enjoy eating them, and bring the money back to them afterwards. That would never happen in the U.S. I lingered a little while as I ate the fresh, fluffy churros, taking in all the people that passed and all the conversations floating around. Then, I walked for 15 minutes to an ATM for the $13 and brought it directly back to this wonderful example of Seville.

Each day, as I went to and from class, I took time to notice all the beauty around me. Seville is full of color and vibrancy in its landscape. The Moorish Revival and Baroque style architecture were amazing, with a rich history dating back to the Roman period, and I was in awe. The balconies covered with Spanish shawls, the religious processionals and the outdoor weddings of locals that I stumbled upon made me feel like I belonged there. I went shopping for food and wine, I bought beautiful bouquets of flowers in the market for under $20, and one-of-a-kind gifts in the ceramics store. I conversed in Spanish as best I could, which was always appreciated by the locals. I ate the most incredible food. Alone. I was doing it. I was exploring this wonderful city and making lifetime memories. I learned getting lost in the side streets of a city can be a great way to discover it for yourself.

By the end of the trip, when some of my fellow travelers who had not yet ventured to Triana, asked me to accompany them to show the way, I just smiled.