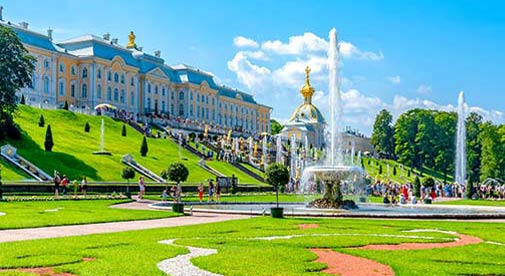 Prepare yourself: This is going to be a long day.

That’s a function of two facts: First, there’s a lot to see in the imperial capital of old Russia; and, second, from about May through July, St. Petersburg (the world’s northernmost city of at least a million people) experiences its famous “white nights,” during which the sun pretends like it wants to set for the night, only to approach the horizon and begin ascending for a new day. That means we have copious amounts of daylight over our 24 hours to see this city’s sights.

We will begin our day with:

With just 24 hours in one of the truly great cities of Europe, why waste it on a dull breakfast? So, let’s start at Teremok, a Russian fast-food chain that doesn’t taste like fast food. Teremok serves up freshly made Russian breakfast staples—porridge and pancakes. But we’re not talking simple, tasteless porridge and pancakes. Think: porridge with apple-caramel and nuts, and thin pancakes (like crepes) filled with ham and cheese, barbequed pork, or sweet jams. It’s quick, tasty, filling, and inexpensive. You’ll find Teremok’s all over central St. Petersburg, but there’s one on Bolshaya Konyushennaya Street that puts you really close to…

The Church of the Savior on Spilled Blood

The church sits along a small canal, on the site where an anarchist assassinated Tsar Alexander II in 1881. Inside, the Church of the Savior is technicolor overload. The walls, the ceilings, the columns … every square inch is covered in explosively vibrant paintings depicting various religious imagery, all lit by banks of windows and beautiful, gilded chandeliers.

That’s the only way I can describe the Hermitage. It’s a few minutes’ walk from the Church of the Savior, and here you’ll find more than 2,000 rooms and some 3 million objects, including the world’s largest collection of paintings. The Hermitage, the brainchild of Catherine the Great in the mid-1760s, houses everything from prehistoric art to Egyptian antiquities to Renaissance paintings and Modern art.

The main building itself is its own work of art. It’s the Winter Palace, the grand, expansive, Baroque style residence of Imperial Russia’s tsars for nearly 200 years. The interior is… well, just go see it.

Since it never gets dark in the summer, you have plenty of time to wander. But you will never see it all; the Hermitage is simply too large. Limit yourself to a few hours.

Very near the Hermitage is St. Isaacs Cathedral. The interior is far more cavernous and ornate than the Church of the Savior, though less technicolor—and the interior is worth the visit.

However, the real reason we’re here is to climb the 262 steps in the spiral staircase that dumps us onto a narrow walkway atop St. Isaac’s golden dome. Up here we’re given a 360-degree view over St. Petersburg. And because there are no real skyscrapers in this city, the view is expansive and unimpeded.

Yes, riding the subway sounds like a pointless way to spend your time in any city. However…

The metro systems in St. Petersburg and Moscow are easily the most beautiful in the world. During the Soviet era, the leadership used metro stations as architectural propaganda, building “palaces for the people” to bring elegance to the workers’ daily commute. As such, many of the metro stations here are works of art.

Hop on the metro at the Admiralteyskaya station (on the 5 line) close to the Hermitage and St. Isaacs, take it two stops to the Zvenigorodskaya – Pushkinskaya stop, where the 5 meets the 1 line. Hop on the 1 and go two stops to Ploshad Vosstaniya, a beautiful tunnel of arches, friezes, and up-lighting. Then jump on the 1 going in the opposite direction to Avtovo, possibly the most beautiful metro station in the city.

Here, you want to exit the station and grab a marshrutka minibus and head to…

This is basically Versailles, with a Russian accent.

PeterHof is about an hour outside the city and is a monumentally large collection of multiple palaces, grand fountains, and ornate gardens built in the early 1700s for Peter the Great. It covers the equivalent of nearly 7,000 football fields.

As with the Hermitage, the PeterHof is so vast that you can’t see everything it has to offer. So, again, limit yourself to a few hours, keeping in mind that you’re talking about two hours of transit time to and from the palace.

St. Petersburg is a watery city built on a series of rivers and canals and connected by 342 bridges of various sizes. Many are draw bridges. So, we will end our 24 hours watching one rise.

During the day, the bridges allow vehicles and people to move about the city unhindered by all the water. But at night, draw bridges lift to allow ships access to the city. It is a beautiful site—all these ornate, lit bridges standing at attention, the city’s low-rise skyline in the background.

Arguably, the most beautiful bridge is Palace Bridge, spanning the city’s historic center. It’s a great place to watch the bridge rise and to snap an iconic photo of St. Petersburg in the permanent dusk of a White Night. The bridges tend to open between 1 a.m. and 2 a.m.; the city publishes online a “timetable of bridge openings.” If you’re up for it, consider a late-night boat tour that traverses the Neva River, giving you the best view of the raised bridges and St. Petersburg.

Even though it’s well into the early a.m., it’s a fine time for a meal. And though you’re in the heart of Imperial Russia, du Nord 1834 feels more like you’re walking into 19th century Paris.

The du Nord on Ligovsky Prospect is open 24 hours a day and serves a variety classically French dishes—soups, salads, and sandwiches to cassoulets, baked duck, and filet mignon.

And now, as the never-setting summer sun begins turning skyward again… you can go to bed having seen some of the best St. Petersburg has on offer.

7 Tips for Driving in Europe This Summer