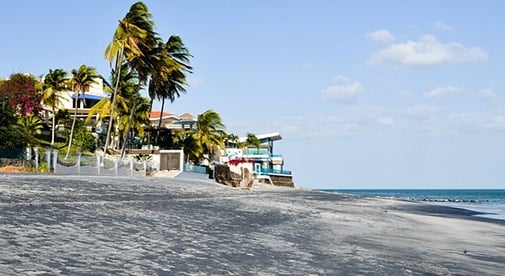 “What I pay for taxes in one year in Panama is what I paid in one month in Florida. That right there was a good enough reason for me to move,” says Roberto Goodyear of his $1,100 a year tax bill.

Roberto and his wife, Marisa, relocated to Coronado Beach, Panama in 2015. He says their four-bedroom home, with a swimming pool and outdoor kitchen in a quiet, gated community, suits them perfectly.

On weekends, well-to-do Panama City residents come out to Coronado Beach to their palatial weekend homes. The beach community is only an hour away from Panama City, where there’s a large, well-run airport and all the conveniences of a big city.

“We’re 10 minutes by car from the beach. There are five grocery stores, there’s a private health clinic, a movie house, banks, good restaurants. We have all the comforts of home,” says Roberto.

Roberto and Marisa enjoy the retiree lifestyle in Coronado. In the morning she takes the dogs for a walk. He wakes at his leisure and walks down the street for a cup of coffee and sometimes breakfast. When he gets back, he heads to his home office where he checks email and social media.

The back of their home is mostly glass overlooking their well-kept yard. They’ve added two bedrooms and redid their kitchen at roughly half the price of what it would have cost in the U.S. Plus, they have a fenced yard perfect for their two dogs—a 17-year-old Schnauzer who came from Florida and a local pup they adopted. Adjacent to the swimming pool is a gazebo, a wet bar, lights, refrigerator, and bathroom for easy entertaining.

“We have a cleaning lady for $25 per day and a handyman for $25 to $30 per day. In the evenings we watch Netflix, have friends over, or go out for dinner,” Roberto says. “We like the better restaurants with a good bottle of wine. Dinner for two with wine runs around $60. There are cheaper places, but we have our favorites.”

Since they have retiree status in Panama, they get discounts on everything from food to airfare, to movies (it costs about $5 for a movie ticket.) They travel two or three times a year to Europe, or back to the U.S. to visit the kids.

Grocery prices aren’t very different from U.S. prices and imported items are bound to be a little more. “Cereal is 40 cents more per box and sometimes I can’t find Cheerios but that’s okay,” Roberto says. Local fruits and veggies are fresh and inexpensive.

The weather is warm. “It’s hot with rain and hot without rain. It’s not a place for those who don’t like the heat,” Roberto explains. Though the temperatures typically stay in the 80s F and don’t climb above 91 F.

Panama uses the American dollar so you never have to think about currency conversions. Also, due to the strong American connection, there are some signs in English. Otherwise, Spanish is the language of choice. However, there is a large expat community from Canada and the U.S. so there’s plenty of English speakers to socialize with.