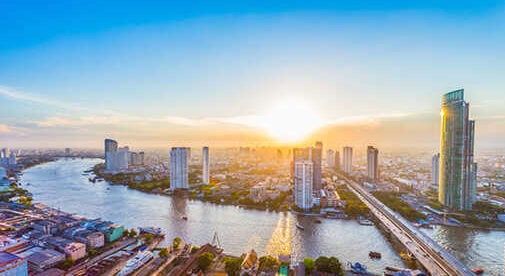 The expat community in Thailand, especially in and around Bangkok, is friendly and supportive. © Yotsaran/iStock

Eating fresh tropical fruit on his patio in a suburban village about an hour from central Bangkok, John Stiles listens to birds, watches butterflies flitting among his garden’s banana trees, and enjoys his first coffee of the day.

Nine years ago, after turning 62, he faced a tough decision. The international school he worked at automatically cuts benefits to workers at that age. He wondered if he should simply accept the situation, go back and search for a new job in the U.S., or reinvent himself in Thailand.

John applied for jobs in the U.S., but he quickly learned that finding a well-paying, fulfilling position in his 60s was nearly impossible in North America. Thai people, though, respect age and experience, which means that there are more opportunities for older citizens, particularly those with skills in business, education, construction, or the arts. John grasped that opportunity, and leveraged his skills to become an educational consultant in Bangkok, while also cutting back his hours to ease into full-time retirement over the following couple of years.

His consulting work allows flexibility: Daily punching in at his downtown office is not required, but he goes there two to four days a week. At other times, he can work remotely from his home, or at one of the nearby cafés or restaurants on the banks of a lake. John lives in what he calls “a nice community of about 10,000 residents, with shops, fitness clubs, hardware stores, fresh markets, and even a small mall.”

The community is officially within Bangkok, but John thinks of it as the suburbs. It’s close to the excitement of Bangkok proper, but it’s also quiet, comfortable, and affordable.

“A furnished studio apartment with air conditioning and hot water will run about 5,000 Thai baht ($150) per month,” John says. “A condominium will be about $400-500, and three-bedroom houses go upwards from there, the average being about $600 per month.”

His own monthly rent for a comfortable split-level, three-bedroom home with 20 banana trees in the garden is just $400. Many expats buy condos. “Foreigners cannot buy land unless they have a Thai partner or spouse, but they can own condominiums,” John explains. Some of his retired friends stay in Thailand for half a year at a time on six-month tourist visas.

A mix of friendly people, proximity to Bangkok’s international airport, and delicious cuisine are some reasons why John encourages retirees to come to his area of Thailand. A typical Thai rice dish with three side dishes will set you back about $1.50. John and a friend recently splurged at a high-end lakeside Swiss restaurant. Including imported German beer and a variety of dinner dishes, the tab was $30.

The expat community in Thailand, especially in and around Bangkok, is friendly and supportive. “There are thousands of retired folks from Europe, Australia, New Zealand, and the Americas.” With so many foreigners in the same general area, finding other expats with similar interests is easy. John has developed long-lasting friendships that started with chats at the local gym or in bars.

I have more friends here than in the U.S.

Some expats in Thailand don’t make an effort to learn Thai. Knowing the language isn’t a necessity, but John tries to do so, and he loves speaking with the locals on buses, boats, everywhere. He feels that speaking Thai, even at a basic level, enriches his experience.

Interacting with a thriving community of local artists is an essential part of John’s life in Thailand. When he met another photographer in Bangkok, Jeremiah Boulware, they started rambling the back streets and canals of Bangkok on photo excursions, taking images of city life that most tourists never see. Other artists often join them.

Together, they started a business, Bangkok Photo Rambles. John and Jeremiah sell photographs and publish a calendar of Thai scenes every year. They’ve recently begun collaborating on a book documenting traditional Thai life—images of people who live in the small streets and canal communities in Bangkok, and in small villages in rural Thailand.

Their photographs have garnered attention and praise, leading to more opportunities that keep John pleasantly busy in his semiretirement. Last year, a fashion magazine in Kolkata, India, hired Bangkok Photo Rambles to be their official photographers for a fashion show in Thailand.

John set up a small gallery in a friend’s premises two years ago for local artists to display their work. “It was enjoyable,” he says, “but it’s too much effort while I am still working as a consultant. I plan to consider opening a permanent gallery when I truly retire, which will be in a year or so.”

For the moment, though, he’s reflective. Winding down to retirement is something he can do at his own pace. Living in such an affordable location, it doesn’t need to be a huge financial worry. He can take his time over it, but he doesn’t need to work and earn to the last possible moment, either.

Freedom like that makes daily life much more enjoyable. “I have found great satisfaction living in Thailand,” John says. “I have more friends here than in the U.S. Thai people are among the friendliest in the world. Now, with the COVID-19 pandemic, Thailand is one of the safest countries to be in. It has worked out well for me.”