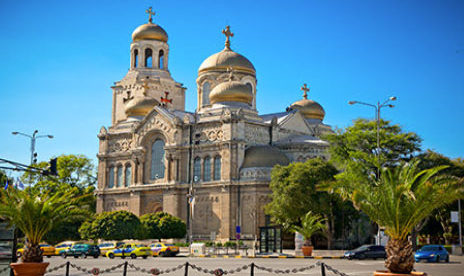 Immerse yourself in history, folklore, architecture, and the modern buzz of Varna. ©iStock.com/master2

Settled by the ancient Thracians, then by the Greeks and Romans from the 7th century B.C., Varna, on the Black Sea coast of Bulgaria, has seen countless conquerors. Nowadays, this Balkan gem is mostly known as the maritime capital of Bulgaria, and for its golden sandy beaches, warm summers (averaging in the 70s to 80s F from May to October), fragrant linden trees, and very affordable prices.

Archaeology is king here. In the Greek district—where, later, the Roman city of Odessus was built—lie the ruins of one of the largest Thermae (bath houses) of the Eastern Roman Empire. Its arch-like structures are decorated with marvelous mosaics, and the floor-plan can still be traced by the remaining walls.

Or, delving into more recent history, the intersection of the two main boulevards in Varna is home to another notable emblem that is gorgeously lit at night. The 19th-century “Dormition of the Mother of God” cathedral is hard to miss. This Eastern Orthodox-style grand structure is topped by huge copper-plated domes that look like gigantic golden onions. A free city tour starts in front of the cathedral every day at 6 p.m. It’s worth taking, to orient yourself in this city of nearly half a million inhabitants, and to learn some of the history of a place where Asian and European cultures have collided over centuries.

For those who want to further indulge in educational recreation, the Archaeological Museum on Maria Luisa boulevard houses the oldest gold artifacts in the world, unearthed from a prehistoric necropolis that dates back to almost 5,000 B.C.

When all that learning whets your appetite, the real fun starts. Aromas of generously spiced and hearty Bulgarian food emanate from almost every window and balcony in Varna. Gyuveche (potato, vegetable, sausage, and cheese casserole) is traditionally slow-baked in a patterned terracotta pot. Banitsa (buttery cheese pastry with layers of filo dough), and shopska cucumber, sheep’s milk cheese, and fresh parsley are some of the national dishes.

Mehana Chuchura, and The Old Platanus are two restaurants of note where you can sample such fare. With their rustic, typically Bulgarian décor, both also serve wide varieties of barbecued delicacies. Venison, or slow-cooked pork neck are local favorites. Meal prices average $10, and that’s with a beverage.

If that’s too elaborate, at the many small bakeries and snack stalls on every street, you can always buy a white cheese banitsa or pizza for less than a dollar.

View the oldest gold artifacts in the world.

To walk it off, head to the central beach in Varna and the Morskata Gradina, which translates as the Sea Garden: 850 acres of landscaped greenery, flowered walkways, and promenades stretching along the coastline.

Sunbathe and bury your toes in the sand while you sip on your mojito in the Cubo beachfront bar, where cocktails cost less than $2.50 and the vibe is hip. Or, later on, dine at one of the open-air restaurants. A large platter of fresh moules marinières mussels with cream) for two costs $4. Wash it down with a large bottle of local Kaminitsa beer for only $1.75.

Despite its chic and aesthetically appealing appearance, The Sea Terrace restaurant will not break the bank. Located on the central beach with access from the Sea Garden, this luxurious establishment has yacht-themed décor, upscale ambience, and a terrace with superb beach views. The most expensive dish on the menu is just $24. A sommelier can help you pick from the impressive Bulgarian wine selection.

Down on the South Beach, right next to the port, is a rarer venue—Mr. Baba, a special restaurant in a life-sized pirate ship docked on the sand, offering exquisite seafood specialties. Try their grilled seabass with calamari in Pernod sauce, and enjoy your evening on the ship’s deck like a real pirate. A dinner for two with a bottle of Prosecco costs around $35.

Public transport in Varna is good. In town, tickets cost 60 cents and buses leave as often as every 20 minutes. Avoid taxis if you can, as some of them overcharge tourists. Alternatively, use the TaxiMe app. A taxi ride from Varna airport to the city center shouldn’t cost you more than $6. There is also a bus line for the same route that charges $1.75.

The annual Varna Channel Cup regatta every May is a chance to view the colors and spectacle of yacht racing close-up, while every July the city turns into a major cultural hub; the Annual Music Festival, the Varna International Theatre Festival, and Varna Opera host a range of performances and live extravaganza.

If you decide to give this land of Orpheus and Dionysus (and the birthplace of the Cyrillic alphabet) a visit, don’t forget to learn about their secrets of longevity (look up Bulgarian yogurt), or try their shkembe chorba tripe soup.

Or, best of all, immerse yourself in the culture and history, listen to the folk tales and legends of the Robin Hood-style Haiduti rebels who fought against Ottoman occupation, and soak in the reverberations of the goat-skin gaida (bagpipe), whose origins derive right from ancient Thrace. A tip for newcomers, though: Nodding your head for a “yes” might actually confuse locals, as in Bulgaria, shaking your head means “yes” and nodding means “no.”