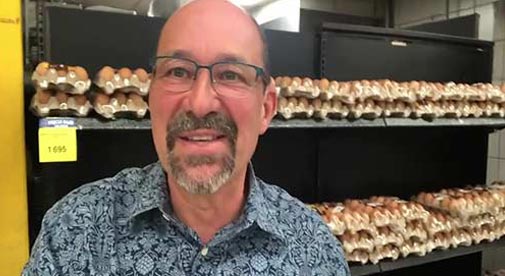 Going to the feria is a great way to pick up fresh produce at good prices, but sometimes you need something that the feria doesn’t have. This is where a grocery store comes in. There are a few differences between grocery stores in Costa Rica and the U.S. so let’s take a look at them.

We don’t have Costco in Costa Rica but if I were to blindfold you and take you inside a Price Smart you’d swear you were in Costco.  They’re not the same company but they still use the Kirkland brands. There are about 10 Walmart supercenters throughout the Central Valley, where I live, too.

One of the first things that surprises people when they come to Costa Rica is they find eggs out on the shelf.  In fact, its only a handful of countries like Japan, Finland, and the U.S. where we wash our eggs, this gets rid of a natural bloom that protects the eggs. So once it’s been washed they have to be stored in the refrigerator but most countries don’t wash the eggs until they’re ready to be used, so they can stay on the shelf like this at room temperature for easily three to four weeks without any problem. Typically speaking you can find eggs on the shelf here that are only two days old, compare this to the U.S. where eggs will be at least two or three weeks old by the time they have been processed and packaged and washed, shipped and put on the shelf.

Most condiments come in plastic squeeze bags from jelly to mayonnaise, mustard, and ketchup. Lizano is a mayonnaise that’s very popular, its by a Costa Rican company but you can find Hellmann’s as well if you’re a Hellmann’s guy. You can’t find milk in the refrigerator section in most stores it’s something that’s a little bit new in Costa Rica. Interestingly the milk here doesn’t contain all the preservatives that the milk in the U.S. has and so it’s very fresh. It can take just a couple of days from the cow being milked before the milk gets processed and put on the shelf.

I thought for the longest time that I had a milk allergy or lactose intolerance in the U.S. but I found after I moved to Costa Rica I can drink all the milk that I want without any trouble because it’s not really the lactose that was causing the problem for me, it’s the preservatives that were put into it. Many other folks have found the same thing.

I told you before you didn’t find a refrigerated milk until a few years ago, this is because milk has always been sold in Costa Rica in boxes on the shelf. The milk has been pasteurized under ultra-high temperatures and therefore it has a very long shelf life. Costa Ricans have used it this way for so long some families prefer to have it this way and are a little bit wary about that fresh refrigerated milk.

You’re not going to easily find aged European-style cheese’s in Costa Rica instead there’s an abundance of fresh white cheese available at most markets. Regardless of size, every grocery store will have an entire aisle devoted to tuna. Ticos love their tuna; tuna with vegetables, tuna in oil, tuna in water, tuna with garlic sauce, tuna with oregano etc. Alcohol from beer to spirits are sold at almost every food market.

Here’s a couple of tips for you, there are two things that people can never seem to find; the first is baking powder it’s called polvo para Hornear, and the second is cornstarch look for Maizena, but be careful it also comes in strawberry flavor. Well there you have it a handful of hints about shopping in Costa Rica.