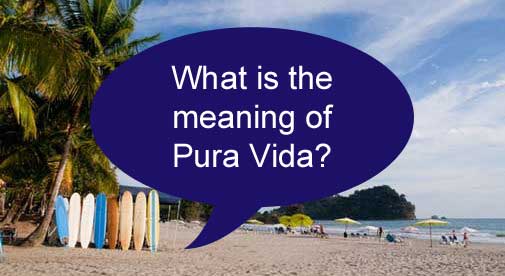 We’ve had a lot of questions about the meaning and origins of the Costa Rican phrase Pura Vida. Our Costa Rica country correspondents give their thoughts on Pura Vida and what it means to them.

The Meaning of Pura Vida

If there were only one Spanish phrase to learn before coming to Costa Rica, it would be pura vida, because you can use it in almost any situation. It is used as a greeting and as a farewell; you can use it for “I’m doing well” or “Everything’s cool”; you can use it for “Oh well!” or “That’s life!” It also can be used for “You’re welcome” or “No worries”–or just about any exclamation like “That’s great!”

Pura vida does translate literally as “pure life.” But like most literal translations, that isn’t actually the best or most accurate English explanation, as you can see from the above examples. Growing up in the South there was a similar use of the word “pure.” It was common to hear your grandmother say something like: “That’s just but pure bull!” The idea was that it was “nothing but” bull.

I think the most accurate, equivalent translation of pura vida is: Nothing But Life.

Where did the phrase Pura Vida come from?

If you have been to Costa Rica, or even if you have read about it, you most likely have heard the term pura vida (pronounced poo-da vee-da). Directly translated it means “pure life” in Spanish. However, in Costa Rican Spanish, it means so much more.

During one of my first holidays in the country in the 1990’s I remember our guide saying “pura vida” again and again, nearly to the point of annoyance. As time went on throughout our week together, I came to understand its versatility and vibe.

It is a warm, comfortable greeting, “Hola, pura vida” (think “aloha”). It is a toast, “Salúd, pura vida.” It is a friendly goodbye “Ciao, pura vida”.  It is also a way to shrug off frustration. For example, your day at the immigration office took many hours and then you were turned away for missing a certain document, forcing you to make another appointment to try it again (hey, it happens!) “Ahhh, it is the pura vida bureaucracy.”

The story goes that this saying was first used in the 1956 Mexican movie of the same name— Pura Vida. However, it was the Costa Ricans who picked up the term and ran with it. Sure, you can say it all day long, but is it more than uttering these two simple words. I feel as if it is truly the spirit of the country and culture. It’s the sense of belonging, boasting a certain cultural pride, making you part of the tapestry that encompasses this beautiful place.

For example, it is the exhilaration of the country’s fútbol team winning their group in the 2014 FIFA World Cup. Yep. We’re a tiny country that most of the Euro football snobs could not even find on a map. Yet there we were beating powerhouse national teams Uruguay, Italy, and England—shocking the sports world. Every bar’s viewing parties erupted in beer showers, white-blue-red streamers, and dancing on the tables. Vamos los Ticos (let’s go Costa Rica) and “pura vida” were shouted in glee. We all belonged together, ticos and expats side-by-side cheering on our national team.

It is the children dancing a traditional Costa Rican dance at a cultural event. A kaleidoscope of flowing, colorful costumes, and smiling innocent faces. “Pura vida” they say shyly as they greet you. And your heart melts.

It is the heart-pounding adventure found at every turn throughout Costa Rica’s off-the-charts biodiversity. Whether you are soaring through the air above the treetops on a zipline or jumping from an airplane above the mountains gently sloping into the azure coastline, or rafting on a heart-pounding raging river. It is nearly impossible not to yell out “pura vida” during the adrenaline rush.

Costa Rica runs deep in the beauty of its people, culture, and landscape. I cannot think of a better way to summarize it more completely and succinctly than the simple words, “pura vida”.

Embracing the Pura Vida Way of Life in Costa Rica

Pura Vida…it’s Costa Rica’s slogan, as well as being a way of life. The direct translation is “pure life” but it’s so much more than that. It’s living the good life…cherishing simple pleasures…spending time with loved ones…and enjoying a slow, relaxed pace of life.

And the good life is exactly what Costa Rica offers. There’s a climate and location to suit every taste…from the cool mountain towns, surrounded by coffee farms and a lush green landscape, in the popular Central Valley…to the warm Pacific-coast beach towns where dozing in a hammock in the afternoon sun, with the clear waters lapping the shore nearby is almost a requirement…to the rain forest surroundings of Lake Arenal, where a close-knit community of expats has been coming for years.

And it’ll cost you less than back home. You can stuff your shopping bags with a week’s worth of delicious fruit, vegetables, bread, meat, and cheese from the local farmers’ market for $40 and expats agree that a budget of between $2,000 and $3,000 a month (depending on where you live and the type of lifestyle you lead) will see a couple living very comfortably here.

But don’t just take my word for it. Here’s what some of the expats already living around Costa Rica have to say about this retirement haven.

Gloria Yeatman and her husband Paul moved to the Central Valley town of San Ramon in 2009, and Gloria says they’ve never looked back.

“We love our lives here and have developed some great friendships with Ticos and other expats alike,” she says. “San Ramon is located at about 3,000 feet, so we have spring-like temperatures all year round. We just love having our doors and windows open all day.

“With rent, healthcare, and a car, our monthly budget usually stays below $2,000 for everything. Even though Costa Rica may be more expensive than many other Central American countries, we are finding it possible to live a good life for less here.”

For Ray Granade, life in the U.S. just got too fast-moving. He and his wife Kim moved to the Lake Arenal area in 2013. “We used to live in the fast lane but the small-town atmosphere here is good for us. I can confidently say that, overall, we are comfortable and happy for less money than we would be spending in the States.”

From their home in the hills they enjoy panoramic views of the lake as well as sunsets and sunrises. And on clear days, they can see all the way to Lake Nicaragua far to the north.

When Russ and Cindy Miller embarked on their Costa Rica adventure, they wanted an ocean view and preferred a more remote and mountainous location. They found it in the country’s Southern Zone.

“The beautiful mountains overlooking the ocean captivated us immediately…it was exactly what we were looking for,” says Russ. “Our life now is so much more laidback than in the States. From morning coffee on the patio to a nice glass of wine at sunset, everything feels more relaxed here.

Everything You Need to Know about Retiring in Costa Rica