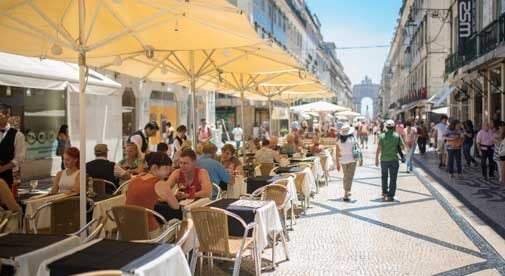 Would you believe that not everyone knows that Portuguese is the official language of Portugal? Some think that Spanish is spoken here, and although both languages do share many of the same words, pronunciation of European Portuguese resembles more of a Slavic language. Rather guttural at times, Portuguese here in Europe is riddled with plenty of shushing sounds. A friend of ours commented that he enjoyed watching the pretty women on local news channels but was a bit surprised when they began spitting at the camera.

Unlike Spanish that is spoken with the mouth wide open in a sing-song fashion, Portuguese is spoken through narrow, closed lips. By keeping the mouth almost closed or in a permanent smile position it makes it easier to make the necessary nasal sounds so common here. Our first Portuguese teacher gave us this tip and the following day as I chatted with locals at the gym, I realized it was true. The friendly receptionist at the front desk of the gym displayed a big, white smile and through her closed mouth came the words “olá bom dia, tudo bem?” Whenever a word ends with the letter “M” it simply means it’s a nasal sound and is pronounced like an “N”. That phrase translates to “hello, good morning, is all good?”

Portuguese and Spanish share 89% of their vocabulary and the written word is rather similar which made my husband, Clyde, and I ecstatic when we began learning the language. Having lived in Panama for five years we had a descent grasp of Spanish which surely would help us to learn Portuguese, or so we thought. Phrases like “¿como estas?” are commonly expressed around the planet and simply mean “how are you?” In Spanish the pronunciation sounds just as the words are written. But in Portuguese vowels are commonly swallowed, as they call it, and the letter “o” is pronounced as “oooo”, making that phrase sound more like “cooomsta”. Yet once we began to learn the rules of European Portuguese, which by the way is far different than its Brazilian counterpart, the language began to make sense—that being said, we are far from fluent and still have much to learn, especially when it comes to understanding what is being said to us.

Of course, the biggest challenge for English speakers trying to learn any romance language is the concept of having to conjugate the verbs. Every Portuguese verb has six different conjugations with different endings, but for those of us who have studied another language, the idea is basically the same.

Portuguese is spoken by 240 million people around the world, yet surprisingly only 5% of native Portuguese speakers live in Portugal!

There is the misconception that the language is spoken only in Portugal and Brazil, but in fact it is also spoken in Mozambique, Angola, Guinea-Bissau, Timor-Leste, Equatorial Guinea, Cape Verde, São Tomé, and Principe. Portuguese is even the official language of the Chinese autonomous territory of Macau, situated off the coast of China, because it was under Portuguese rule until 1999.

Portuguese is the sixth most common language spoken on the planet, and has the potential to become an international communications language according to UNESCO.

Even the U.S. has over 1.2 million native Portuguese speakers mostly situated in Providence, Rhode Island, Boston, Massachusetts, and the New York-New Jersey Tri-State area. Growing up in New Jersey I had absolutely no idea that there were Portuguese speakers all around me, nor did I realize that as an adult I would be living among them trying to learn their language.

Portuguese is heavily influenced by Arabic which once served as the official language of both Portugal and Spain in the 8th century when the Islamic Moors from North Africa and the Middle East ruled over both countries. During the Reconquista of the 13th century Portugal gained control once again and the language began to change. But still today many of the words used in Portuguese came from Arabic including almofada (cushion), azeitona (olive), and garrafa (bottle).

Originally, the Portuguese alphabet did not include the letters, K, Y, and W. Whenever the letter K was needed the letters “QU,” would be used in its place. A word such as “kilogram” would be spelled as “quilograma”. The letters Y and W were only ever found in foreign words and not part of the language as a whole. But in 2009 Portuguese speaking countries around the world signed an “Orthographic Agreement”, which standardized the spelling and added the additional letters.

Learning any language is challenging and requires study time, repetition, and tons of effort, especially for those of us who are of advanced age. I had always heard claims that guaranteed all that was necessary was a move to where the language was spoken, and almost like magic it would seep into the brain. But sadly, after full immersion in a Spanish speaking country for five years and now a Portuguese country, my brain did not get the message. Every morning I awake hopeful, expecting to open my mouth and spout out words in fluent Portuguese, but it has not happened yet.

Various options are available to learn European Portuguese through group or private lessons, using online programs, or signing up at local universities. The Portuguese government even offers free classes designed just for foreigners that run in conjunction with the school year and are presented in a classroom setting. One of the many benefits of learning the language is to be able to apply for citizenship and reap the rewards of having a European passport (after living here for five continuous years and passing a required language test).