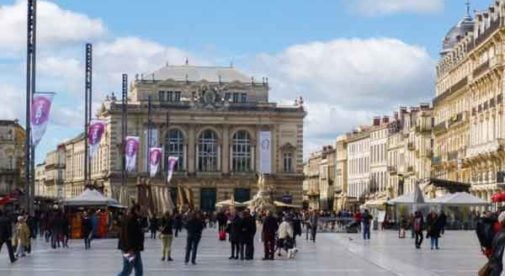 Of course there were challenges with that cultural transition, especially living in small-town France for the first nine months. All in all, though, I still found France to be an incredible place to live, learn, and love. Here are three reasons that I think you might too.

The French know how to appreciate each moment

You’ll find here that people really take their time to live in the now. They stroll through parks without hurry, even in the bustling capital of Paris. They hang their laundry to dry in the fresh air, humming along with patience and care, rather than stuffing things into a dryer for the sake of convenience.

The most obvious evidence of this “living in the moment” attitude is in their approach to food. Meal preparation and mealtime are enjoyed to the very last drop. It’s rare to see people scarfing down their lunch on their way to a meeting, or eating at their desks, or, especially, eating in their cars. Instead, they’ll sit down at one of the countless local cafés and wait patiently for the fresh-made meal to come out. In the evening they’ll often prepare their own meals, usually from scratch, and then enjoy at the table without distraction, taking in the full experience of flavors, presentation, and company. Normally we’ll spend no less than an hour or two enjoying dinner, chatting, joking and sometimes debating, and you can be sure that in that time, nobody is watching the clock or worrying about what comes next. Each thing in its own time. 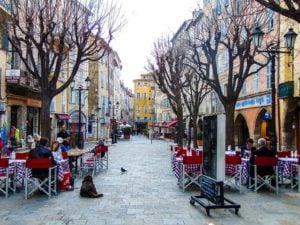 The French love to linger over lunch in cafés and restaurants.

France is the country of little pleasures

The French have an almost uncanny knack for finding and enjoying the little things. On any given weekday, I usually see at least one person carrying a bouquet of flowers to brighten up their little Parisian home. They take the time to put on something nice even when they’re just going to the grocery store, not to impress others, but to feel lovely themselves. Since moving here, I’ve realized just how much of a difference those little things can make. Wearing “real clothes” really changes the way we carry ourselves—it creates a positive upward spiral of self-confidence which impacts our interactions and our day-to-day experiences.

One day a friend of mine asked if anyone needed anything from town while he went to pick up wine. I piped up asking if he could bring back some chocolate, figuring he would pick up the French equivalent of a Hershey’s bar. Thirty minutes later, he walked in the door with an adorably-packed box of artisan chocolates from a local shop, and handed it over like there was nothing to it. I was floored with the level of care he’d put into meeting my simple request, and in that moment came to appreciate even more the culture of care in France.

The French language is like a song made of silk

Perhaps it’s even more evident before learning the language, but even for practiced French learners, the sounds flow together like a river. It’s just as well if you don’t understand the language at first—just listening to the stream of words is enough to make one melt for French. Once you start to recognize the individual sounds, it’s even more exciting, although learning the language certainly does come with its challenges. The French language is really tuned toward creating sounds that flow together (often the ending of a word is silent so that it doesn’t collide suddenly with the next word).

A quick note for those eager to learn the language: most French people appreciate the attempts to learn the language, but sometimes for efficiency’s sake they’ll just switch to English, because most of them have spoken or at least heard it from a young age. Persistence and patience is key to mastering the flow of French, or any language.

The complexity of French culture and the experience of living in France really can’t be summed up in a few words. It must be lived. It certainly is useful, however, to learn about the culture before taking a trip, especially if you’re considering moving abroad and France is on your radar.

At the end of the day, there’s not one particular country that’s the right fit for everyone, but one thing’s certain: France is a place where you can be sure to slow down, smell the roses, and learn to appreciate the simple pleasures in life.

Cost of Living in Provence