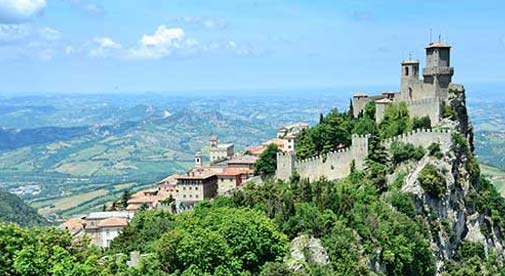 The inherent beauty of Italy’s architecture and landscapes has made it the ideal film set for many movies. Who doesn’t immediately recognize the canals of Venice, the Colosseum in Rome, or the cypress-lined lanes of Tuscany? Italy has dreamy towns that are so picture-perfect they look like they have come right off the pages of a fairytale. There are many, but these are my five favorite fairytale towns in Italy.

The walled city of Urbino in northern Le Marche has warm amber-hued brick, and when lit by golden sunlight emits a positively ethereal effect. The spire-like towers and castle-like wonder of the Palazzo Ducale with the cathedral’s dignified dome and bell tower rising behind it gives the first impression of a princess’s palace. When frosted in snowfall it’s even more magical. There’s a lot to love about Urbino’s cobbled old town that shows off its world heritage status in stately style. It was the birthplace of Raphael, so there’s plenty of artwork to revel in, too.

Not far from Urbino, the dramatic castles of San Marino perch themselves on the aerie pinnacles of sharply sloped Mount Titano, at 2,400 feet above sea level. Considering it is only 18 miles from the Adriatic, that’s quite a drastic incline. That San Marino isn’t actually part of Italy only adds to the allure, as the city-state is the world’s oldest independent republic. Encircled by the regions of Le Marche and Emilia Romagna, the stunning setting amidst ridges and hills is captivating, but the countryside is upstaged by the impossibly-positioned castles—three of them on successive peaks. The republic retains some intriguing pomp and ceremony, like the changing of the guard in front of the Palazzo Pubblico. The easiest way to arrive in San Marino is by cable car, adding to the Quixote charm.

This astonishing town in northern Lazio near the Umbria border has defied the odds and hangs on despite having been dubbed “il paese che muore”—the dying town. Occupying a small tufa mesa amidst ghost-like sculpted canyons, the other-worldly landscape heightens the dramatic island-like effect that resembles a Tolkien setting, especially when mist or clouds roll in. Civita is reached only by way of a long footbridge. Its improbable setting has also led to its equally improbable status as a tourist destination, drawn to the almost-imaginary quality of the place.

Cradled in the clefts amidst the jagged spires of the Dolomiti Lucane in the southern region of Basilicata, the first sight of Castelmezzano makes you blink because it almost seems imaginary. The spectacle of stone and pastel houses amidst the rocks exudes an air of mystery. The town’s builders found an ideal shelter to escape invaders, and Castelmezzano remained in its own world until after WWII. It certainly seems mythical enough, especially at night with suffused light, floodlit peaks and a dazzling display of stars. It’s downright romantic.

The Valle d’Itria zone of Puglia holds an architectural oddity, called trulli. The peculiar rustic whitewashed rural homes are surmounted by conical teepee-like roofs, made from stacked stones without mortar. They’re scattered around the area’s countryside, but the town of Alberobello is the epicenter with more than 1,000 trulli, looking like a city of hobbit homes. The entire town is built of them, resembling a pointy-roofed fantasy-land where you expect elves and gnomes to step off the pages of a children’s book and frolic in the streets.

3 Reasons Why Abruzzo, Italy is a Must-See Destination