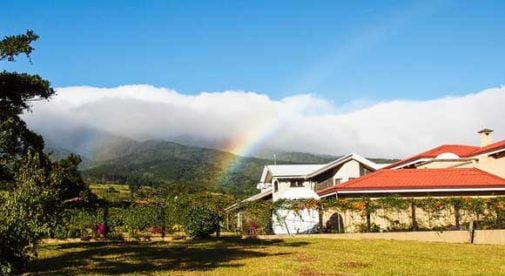 When my wife Jen and I decided to move to Costa Rica, like many, we thought we’d end up living in a beach area. However, we wanted to start the residence process right away and also get a handle on our budget, so the Central Valley seemed an excellent landing spot.

We chose Grecia. The town is just an hour bus ride from San José, Costa Rica’s capital, where our immigration attorney is based. Up in the hills above the town, where we live, the climate is temperate–so we don’t need air-conditioning or heating. This has helped us figure out our budget.

We have been in Costa Rica for three years now and still live in Grecia. Here’s why:

The climate in Grecia (and environs) is what many would consider perfect. Up in the hills above the town, daily temperatures range from 60 F to 80 F. This range is constant year-round as Costa Rica only has two seasons, rainy season (May to November) and dry season.

In the town itself, the temperature can be up to 10 degrees higher than on the ridges, but it is still mild. Most homes don’t have air-conditioners or heaters; they’re just not needed.

When we moved to Costa Rica, one of our requirements was that we live somewhere with a view. Well, views abound throughout the country, and Grecia is no exception. The town is part of the Central Valley and as the name implies, it’s surrounded by breathtaking mountain ranges.

Many expats live on one of five ridges that run from the town up to Poás Volcano. The added elevation provides even more spectacular 270-degree views.

Grecia is a farming town—mostly coffee and sugarcane—and as such, the Ticos that live here are hard-working, salt of the earth folk. We have felt very welcome in the town and have made friends with several families. They don’t even make fun of my awful Spanish.

In addition to the native population, Grecia has a flourishing expat community. There are parties to attend, groups to get involved in within the community, and specialty clubs for all manner of hobbyist.

Size does matter. Jen and I didn’t want to live in a large city. At the same time, we wanted a town large enough to support some conveniences. With 18,000 inhabitants, Grecia fits us just right. It is small enough to be able to get around easily and to recognize people when we’re out, yet big enough to have restaurant, grocery, and shopping options. There’s even a small mall with a movie theater that shows new releases.

Finally, we love Grecia because it’s close to so many things. First are the big cities—if we want a bit of culture, we can be in San José in about an hour. If we need to fly back to the States or somewhere else, the airport in Alejuela is about 45 minutes away.

Grecia is also close to many tourist attractions: Poás Volcano, lot of waterfalls, hiking trails, and other natural resources. And don’t think I have forgotten about the beach. We can be at a popular beach in about two hours. A four-hour drive will take us practically anywhere else in the country.

All of these reasons make Grecia a wonderful retirement destination.

Everything you need to know about Costa Rica