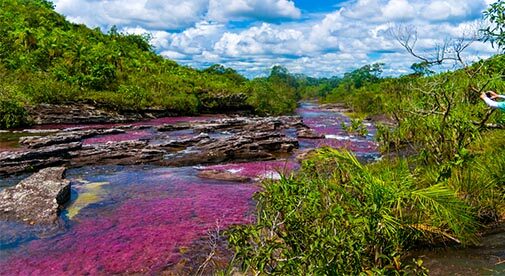 There are many good reasons to consider living in Colombia. International Living has been telling its readers for several years about some of the benefits of living in the country that is considered the gateway to South America.

Colombia has a diverse climate, excellent healthcare, a lower cost of living, is close to the U.S. and Canada, and you can find good-valued real estate. All of these are fabulous reasons to live in Colombia, but other countries have some of these same benefits. So, let me tell you about five things that make Colombia unique.

1. Colombia is the Only South American Country With Coastlines on Both the Pacific Ocean and the Caribbean Sea

Colombia has nearly 2,000 miles of combined coastline along the Pacific Ocean and the Caribbean Sea. Both coastlines offer warm, tropical climates, and beautiful beaches. However, each of them has its own unique charm and character.

The Caribbean coast cities of Santa Marta and Cartagena have been welcoming tourists for many years. Their beaches tend to have crystal blue water, and white or beige sand. They make great spots for scuba diving, snorkeling, and boating. Santa Marta has South America’s only IGY (Island Global Yachting) destination marina, while Cartagena is home to the largest cruise ship and commercial terminal. More than 3,000 ships pass through the five-berth terminal every year.

A few particular highlights of Colombia’s Caribbean coast include the Rosario Islands and Tayrona National Park. The Rosario Islands, one of the 46 Natural National Parks of Colombia, are about a one-hour boat ride out to sea from Cartagena’s old walled city.  Although some of the islands are rocky or surrounded by mangroves, many of them are home to stunning, picture-perfect Caribbean white-sand beaches. Tayrona National Park is a 30-minute drive up the coast from the center of Santa Marta. The park covers 58 square miles and is home to several hundred species of birds, mammals, plants, and aquatic life.

The Pacific coast is home to the major shipping port city of Buenaventura and eco-travel adventure excursions. The majority of the entire coastal area is rural with a few scattered villages. The beaches along the Pacific Coast have extremely virgin landscapes perfect for hiking. This area is definitely off the beaten tourism path, especially compared to the Caribbean coast. While the beaches are a bit trickier to reach due to fewer flights and difficult roads, you might want to take a trip to visit this area between July and November to experience the majestic humpback whales during mating season. You can also enjoy spending time in an eco-hotel, unplugged from the world as there is no internet or phone service, while you walk along completely pristine beaches with no one else in sight.

2. Colombia is the World’s Leading Source of Emeralds

Colombian emeralds are considered to be the purest and the most sought-after in the world. Prized for their superior quality and an unlimited variety of green tones, Colombia provides between 70%-90% of the global demand for high-quality emeralds.

The eastern range of the Andes mountains, between the states of Boyacá and Cundinamarca, is where most Colombian emeralds are mined. The three major mines in Colombia are Muzo, Coscuez, and Chivor. Muzo continues to be the largest and most influential emerald mine in the world to this date. The name of the mines is also synonymous with the color of the emeralds. Muzo refers to a warm, grassy-green emerald, with hints of yellow, while Chivor describes a deeper green color.

The best place to buy emeralds in Colombia is most certainly the emerald market in the capital city of Bogota. The dedicated Emerald District near La Candelaria neighborhood, between 12th Street and 6th Avenue, is filled with back-to-back reputable jewelry stores. You can also head over to the Emerald Trade Center of Bogota on Avenida Jiménez #5-43.

One way to learn more about Colombian emeralds is to take a tour. The Emerald Company, which owns a mine in Colombia, diversified into emerald tourism tours. Founder Blake takes guests on an emerald mining and dealing experience, showcasing the cutting, polishing, dealing, and trading of the world’s finest emeralds. You can also go on a mine tour where you will experience being in a real mine, feeling the heat, the smell of dynamite, the strategy to search and find emeralds, and the thrill of knowing that somewhere in the background you can find a gemstone.

A fun fact: the 1984 movie Romancing the Stone was set, although not filmed, in Colombia.

3. Colombia has the Most Orchid Species in the World

Colombia has the largest number of orchids in the world, with more than 4,000 different species and 1,543 of which are only found here. The orchid Cattleya trianae, or the “Christmas orchid” is Colombia’s national flower. It was chosen because the combination of blue, yellow, and red colors in the flowers are reminiscent of the Colombian flag. It was named after the prominent Colombian botanist Jose Jeronimo Triana and is most commonly found throughout the country.

The reason Colombia has so many species is primarily due to the Andes mountain ranges. They provide a diverse set of environments, including lowland dry forests, wet forests, and cloud forests as well as Paramos (grassland-like environments). Most of the Colombian orchid species diversity are epiphytes (plants that live on the bark of other trees and that depend on the air moist and debris accumulated at branch and boles of trees). In fact, the cloud forests of the state of Nariño in western Colombia hold the record for the place with the highest number of epiphyte diversity in the world.

The blooms are produced during the winter and early spring. New growth begins shortly after flowering finishes in the early spring and continues to August, but the flower buds do not start to grow until November. Orchids can survive up to 100 years, and their shape, size, and texture of leaves depend on their habitat. Orchids that live in dry climates have thick leaves covered with wax, while species that live in warm and humid areas have thin, elongated leaves. Some species do not have leaves at all.

Each year the botanical gardens in Medellín present a special orchid display during the Feria de las Flores (flower festival) to page homage to the national treasure.

With only 0.1% of the world’s total landmass, Colombia has close to 20% of the planet’s birds, over 1,920 species. No wonder birdwatchers from all over the world come to Colombia to capture photographs and record bird sightings. For the fourth time in a row, Colombia took first place in the Global Big Day, an international bird counting competition held on May 9, 2020.

The Caribbean city of Santa Marta has something quite special for birders, the Sierra Nevada snow-capped mountains. They are the world’s highest coastal mountain range and in fact the highest point in Colombia. The range is home to over 600 bird species, including 22 endemic species you cannot see anywhere else on earth. This area is considered one of the top locations for birding. It is home to some of Colombia’s most emblematic birds, including the Andean Condor (national bird).

The Río Blanco Nature Reserve, considered to be among the top three places in the world for birding, is within a 30-minute drive from the city of Manizales in Colombia’s coffee region. There you can see 12 of Colombia’s endemic species are restricted to the central Andes mountains.

The Amazon is indisputably Colombia’s true bird-watching paradise. With over 750 bird species in the Colombian Amazon, one-third of the country’s overall bird population lives here.

The hummingbird (Colibri in Spanish) is Colombia’s best-loved bird and there are almost 200 different species of these incredible hovering birds. It is considered a symbol of healing. Many of the hospitals, clinics, and treatment centers in Colombia use a hummingbird in their logos.

5. The Most Beautiful River in the World

The Caño Cristales river, dubbed the “river of five colors” is alive with brilliant red, yellow, green, blue, and black colors from the blooming aquatic plants—particularly the macarenia clavigera—that grow just below the crystal-clear water´s surface.

Considered one of Colombia’s most beautiful eco-tourist attractions, the river is situated in the remote Sierra de la Macarena National Park in the Meta department in central Colombia. And if you need further urging to embark on this trip, Caño Cristales was chosen as one of National Geographic’s 28 best places to travel for 2019. The eco-park is open to tourists from late May through December, but the peak time to view the vivid colors in the bright sunlight is between July and October. Because it is an eco-park, sunscreen and bug repellent are not allowed while on the river

You must have a local registered guide for the trip, so it is best to hire a tour company to handle all the logistics including flight and accommodations. Once in the town, getting to the river is a little bit of a process, but well worth the effort. After a short, motorized-canoe ride from the town dock across the Guayabero River, followed by a 45-minute ride in the back of a transport jeep, you arrive at one of the entrances to the park. During the 15 minutes of moderate-level walking from the entrance through green vegetation and small streams to the river, you are surrounded by hundreds of photo opportunities of flowers, birds, butterflies, and other creatures.

One of the highlights of visiting Caño Cristales is swimming in areas where the river´s current carves deep circular craters into the rocks, called giant’s kettles. Swimming is permitted only in certain areas of the river away from where the plant life grows.

5 Places To Live In Colombia; 2 To Avoid

The Weather in Colombia