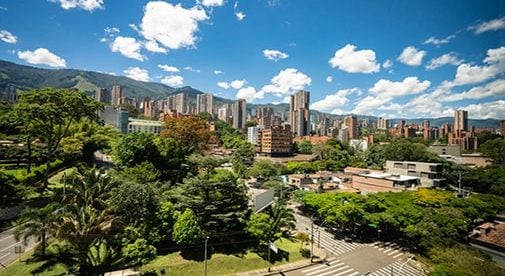 Many people have an outdated perception of Colombia. The country has transformed from its dark past of violence and drug cartels and is now a vibrant, thriving, and welcoming place to live.

Colombia is the second most biodiverse country in the world. So, expats looking for warm, tropical beach living, or more temperate, fresh, spring-like mountain climate can find what they desire.

The cost of living will vary depending on your lifestyle choice, which city you choose, and even which neighborhood in that city. However, you can live in many areas of any of these cities for $2,000 per month.

If you are considering making this up-and-coming retirement haven country your new home, here are some places to check out and a couple to skip.

Where to live in the mountains:

Even though Medellín is Colombia’s second-largest city, with a population of nearly 3 million, it really feels more like a bunch of neighborhoods all strung together. The red-brick high-rise apartment buildings and low-rise townhomes blend perfectly into the greenery of the Andes Mountains that surround the city. Due to the near-perfect climate, flowers are constantly in bloom and dot the streets with color year-round. Daytime high temperatures average mid-70s F to low 80s F. It is easy to understand why Medellín is nicknamed “The City of Eternal Spring.”

Medellín is the only city in Colombia with a metro system, making getting around the city quite easy. It is a cosmopolitan city that boasts 30 universities, a robust gastronomy scene with hundreds of restaurants, and world-class healthcare. Seven of the top 49 Latin American hospitals are in Medellín. The city also has an international airport with direct flights to the U.S.

Life in Medellín is a perfect blend of access to all the amenities of big-city living, but at a price much lower than many cities in the U.S. You will find English-speaking doctors, lawyers, bankers, and accountants to handle your professional needs. But not many people who you will encounter in your day-to-day living, such as taxi drivers, store clerks, and restaurant staff speak English. 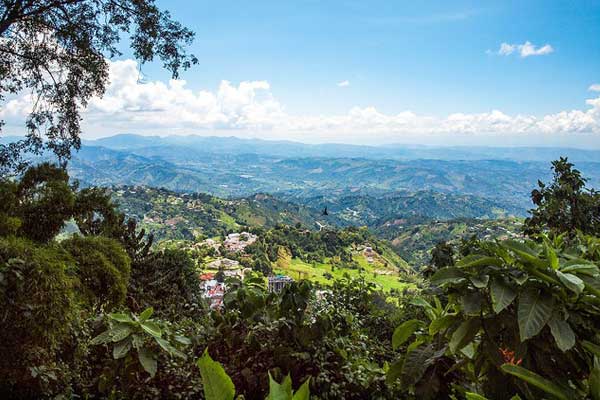 Living in the coffee region offers the similar spring-like climate as Medellín, but in cities much smaller in size. Pereira (population 500,000), Manizales (population 400,000), and Armenia (300,000) make up the coffee axis. The cities are modern, have good public transportation, and plenty of activities to keep you busy.

The triangle has perfect weather conditions for growing some of the world´s richest coffee. Manizales is nestled higher in the Andes mountains, so the climate is slightly cooler than both Pereira and Armenia, especially at night. This is light jacket weather.

The coffee region is becoming popular with retirees and the numbers are continuing to grow. The cost of living is about 10% to 15% lower than many parts of Medellín. You can enjoy stunning, green mountain scenery in any of these cities. Several parts of the cities are quite hilly, making walking in these areas an aerobic workout.

The area does attract tourists to the National Coffee theme park and the various natural, hot-spring, sulfur spa resorts. 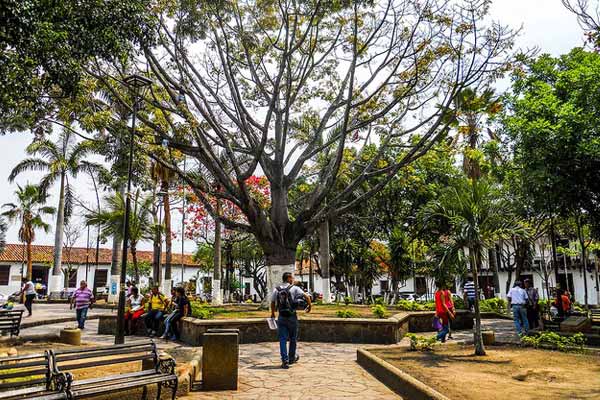 Situated on a mesa in the Andes Mountains, Bucaramanga has all the benefits of gorgeous mountain views but with flat, pedestrian-friendly streets. Nicknamed “The City of Parks”, it is easy to walk around the city and enjoy any of the 160 parks and use the free exercise equipment, or just relax in the shade of green trees while sipping some fresh-squeezed juice.

There aren’t many expats living there yet, and little English is spoken, but the city has all the makings of a perfect retirement spot for expats looking to be pioneers, yet within the confines of a metropolitan area with 1 million residents.

The cost of living is even less expensive than many parts of Medellín and the Coffee Triangle.

Where to live on the coast: 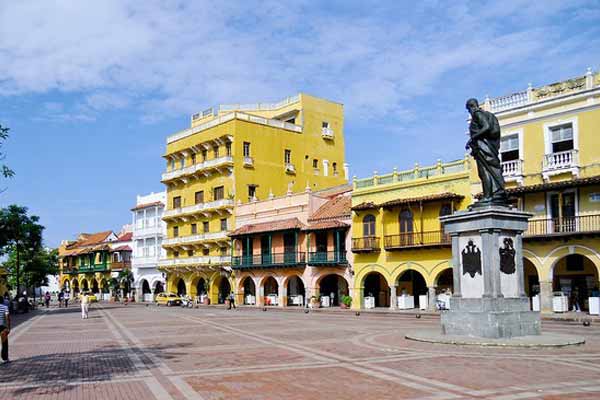 Cartagena is a popular tourist destination thanks to its interesting history, excellent cuisine, and amazing shopping. It is on the Caribbean coast and a major seaport for cruise ships. The residential population of about 1 million people swells to absorb the nearly 112,000 annual cruise ship passengers that pass through the terminal each year. This can make getting around the city tedious as you bob and weave around the tourists.

As you can imagine, Cartagena has a hot and humid tropical climate. Temperatures in the low 90s are not uncommon. Sunscreen, a hat, and carrying bottled water are necessities.

Cartagena is full of Old World charm and is a UNESCO World Heritage Site. The old walled city features narrow, cobblestone streets, churches, museums, restaurants, and shops. Sections of the wall have steps that let you walk along the top while listening to the waves crashing close by.

There is a large expat community who enjoy the many benefits of retiring in Cartagena. There are lots of recreational activities including boating, swimming, bicycle riding around the city, and playing golf. It is easy to lead an active, vital life in Cartagena.

The cost of living tends to be higher than some other coastal communities due to the influx of so many tourists. However, you can still live for about half of what a similar coastal lifestyle would cost you back in the U.S. 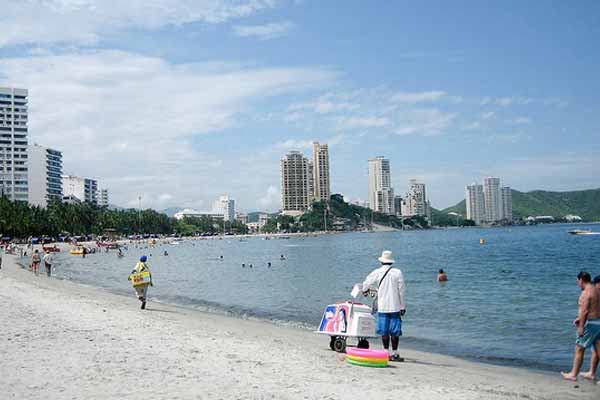 Located on Colombia’s Caribbean coast, Santa Marta is quickly becoming a sought-after retirement destination. With an average daytime high of 90 F and an evening low of 75 F, the warm, tropical climate is a magnet for those wanting an outdoor, ocean-focused lifestyle.

With 500,000 residents, Santa Marta is about half the size of the more well-known city of Cartagena, just 200 miles down the coast. By comparison, Santa Marta is less humid, less expensive, and has better beaches than Cartagena.

A quick 15-minute taxi ride from the airport, the greater Santa Marta area offers history, beautiful white sandy beaches, water activities, ecotourism, trendy restaurants, and a growing nightlife. Although the climate is hot, the gentle breezes that come in off the nearby Sierra Nevada mountain make being out and about extremely delightful.

Colombia’s capital city is the hub for business, government, and commerce. It is the largest city with over 8 million inhabitants. With an average daytime high of 65 F and an average low of 48 F, the climate is very cool compared to many other places in Colombia. Bogotá is not attracting many retirees due to the climate and the sheer size of the city. Also, the cost of living and price of real estate is significantly higher than many of the cities mentioned above.

The majority of expats living in Bogotá are working for international companies, universities, and government organizations, so they are not part of the small expat retirement community. You will most likely go through the city either via the international airport, or if you need to visit your embassy for passport or visa requirements.

So, while Bogotá certainly has amazing international cuisine, interesting cultural spots, and good shopping, it is better as a place for a weekend trip than a place to retire to all year round.

The Pacific coast is home to the major shipping port city of Buenaventura and some eco-travel adventure excursions. The majority of the coastal area is rural with a few scattered villages and poor roads. You can only access the area by domestic flights. There are essentially no expats living in this very remote part of Colombia.

However, if you are adventurous, you might want to take a trip to visit this area between July and November to experience the majestic humpback whales during mating season. You can also enjoy spending time in an eco-hotel, unplugged from the world as there is no internet or phone service, while you walk along completely pristine beaches with no one else in sight.

The Weather in Colombia