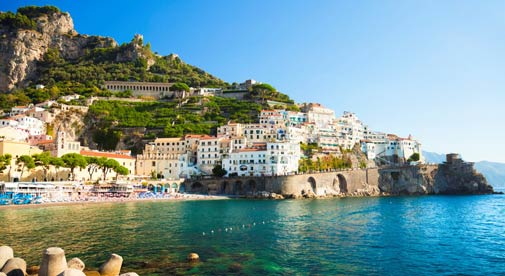 You could build a very strong case for the claim that Italy’s Amalfi Coast is one of the most beautiful and enticing places on the planet. After spending a week based in Positano exploring the coast, Capri, and of course a side-trip to the ruins of Pompeii, I can say I whole-heartedly agree; from the clear waters of the Tyrrhenian Sea that seem to capture all of the shades between blue and green, to the way the beaches leap magnificently into a mix of rocky and verdant highlands, there is beauty for everyone to appreciate along this magic shore.

One of the best places to experience all that the Amalfi Coast has to offer is not surprisingly in the eponymous city of Amalfi. With its perfect natural harbor and location in a lush valley at the foot of Monte Cerreto (4314 feet., 1315 meters.), it is clear to see why Amalfi was such an important coastal power from the 9th to 12th centuries. Two big events changed that prominence. First, around 1135 A.D. Amalfi was sacked and taken over by the Pisans in a fight for domination between the port cities. Amalfi never recovered as a maritime power, especially after a tsunami in 1343 destroyed the lower part of the town.

Amalfi has always had a reputation as a tourist center however, and today it remains one of the most popular destinations in Italy. Like Positano and Capri, Amalfi attracts a host of celebrities, royalty, and artists to its shore. Authors Gore Vidal and Henrik Ibsen lived there for a time as well as the famous composer Richard Wagner, who completed some of his works in this majestic setting.

Amalfi began to attract tourists as early as 1206 A.D., when some of the remains of Saint Andrew were brought there after the fall of Constantinople. Just like today, supplicants climbed the stairs to the heart of Amalfi to the Piazza Duomo, where they could pay respects to the holy relics in the crypt of the imposing Saint Andrew’s Cathedral.

Our approach to Amalfi was, to my mind, in the best way possible—from the sea.

Modern hydrofoils have replaced wood and reed ships, but the port of Amalfi is still a busy place. Although there are less expensive charters on smaller boats that take a little longer to reach Amalfi, the large, high-speed hydrofoils run several times a day. It was easy to buy tickets right at the docks with no advance registration for the 30-minute ride for about $25, and we were quickly underway to marvel at the glorious shoreline. The ship glided smoothly past towns like Veticca Maggiore, Praiano, and Conca dei Marini, where age-old white buildings seem to cling to the cliffsides over the turquoise waters.

In these modern times, there is a coastal road that connects these villages, but not so long ago, the only transport was by sea. What a challenge that must have been. We saw many narrow, twisting stairways from small stone piers up to the homes on the bluffs. In fact, for one truly impressive home we counted eight switchbacks and two tunnels burrowed through rock to climb hundreds of feet up the steep stairway from dock to dwelling.

Once in sight of Amalfi’s harbor, you can instantly see why it was such a strategic port. A finger of land juts out almost 300 yards to the east, like an arm cradling and protecting the south-facing shore. A seawall has been added that extends straight out from shore, so that ships that dock at Amalfi are almost surrounded by breakwaters.

Our ship docked and let us off right at the Lungomare dei Cavalieri (Seafront of the Knights), where it was a short walk to the Piazza Flavio Gioia. Sitting next to the small but popular Mandingo Beach, this small circular park of grass, flowers, palm trees, and a fountain honors the statue of Flavio, who is credited with the invention of the sailor’s compass.

Clearly visible from here is the rococo bell tower of Saint Andrew’s Cathedral, but we did not enter it by the normal route. Instead, we were distracted by the many stores, pubs, restaurants, and historic sites that beckon the tourists. Our winding path took us first along the waterfront, and then into a maze of pedestrian walkways. In the true Italian fashion, we were weaving in and out of shops, sometimes going under a building that stretched across the boulevard. Before we knew it, we seemed to be in a kind of tunnel. There were still shops and homes, but things were definitely taking on an underground feel.

To this day I’m still not sure how we managed, but we walked through a doorway and were suddenly in the crypt of Saint Andrew, directly behind the reliquary, thought to contain some of the bones of the Saint himself (the skull was moved to St. Peter’s in Rome in 1964). It is said that four times each year during festival days, the bones exude a liquid called “Saint Andrew’s Manna”. Many believe this liquid has miraculous properties and are eager to be anointed with it.

After our entrance through the exit, we worked our way upstream the flow of sightseers, up the stairs and through the museum area that displays vestments, adornments, religious artworks, preserved pieces of earlier constructions of the church, and more. Up in the fresh air at last, we toured the gardens of the central courtyard, known as the “Cloisters of Paradise”, before entering the cathedral proper.

The High Altar is built around the sarcophagus of Archbishop Pietro Capuano (died 1214 —let’s face it, skeletal remains abound in Italy), and a large wooden cross dating from the 13th century dominates the liturgical section. What I found most impressive, was a mother of pearl crucifix from the Holy Land on exhibit near the door. Although only a few feet tall, it is packed with incredibly intricate and perfectly symmetrical edging. The minute carvings on the cross itself get more elaborate the closer you get to the piece, with some sections so thin they are translucent. A panoply of images, like a manger scene, a portrait, a cockerel standing on a post, and even skull and crossbones can be spotted in this masterwork.

Finally, we arrived where we should have started—outside the main entrance to the cathedral, at the foot of the 62 wide and steep stairs looking up at the splendid façade. Although the bell tower dates back to the 12th century, the façade was rebuilt in the late 19th century in striped marble and stone, with a tall pediment decorated with mosaics, and a deep porch with windows of delicate Arab-Moorish tracery similar to, but more ornate than, the original.

Prominent in the bustling Piazza Duomo in front of the cathedral is the statue of Saint Andrew in front of his X shaped cross. Around it is a basin with several spouts, which some of the locals still use as a water source.  As we stood there at the heart of Amalfi, we knew there was still so much more to see and do in this fascinating and historic city; like the Maritime Arsenal and Handmade Paper Museums, for example. We could also smell the enticing aroma of the restaurants gearing up for lunch, and as in most of Italy, there were way too many choices.

However, we had a different goal that bright sunny day—we were going to hop on a bus for the 20-minute ride to Ravello, City of Flowers and Music, and find our lunch there.

But that, as they say in Italy, is un’altra storia (another story).