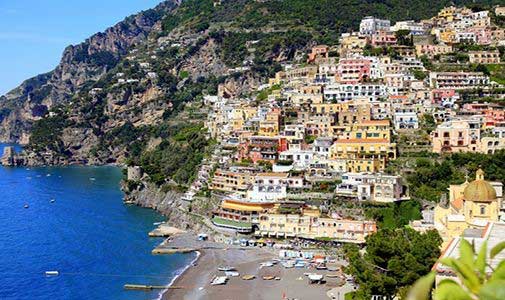 We’re in a small, Italian automobile, and I’m pretty sure we are going to die. My wife and I, along with her brother and sister-in-law, are in the second week of a 20-day trip to Italy. After a wonderful week in Florence, with side-trips to Venice and Lucca, we took the train south to Naples. During high season, there is a hydrofoil that will whisk you across the Gulf of Naples and directly to our next stop, Positano. But this was early May, and the boats were not yet running.

On paper, it was no problem—it was easy enough to arrange for a driver to meet us at the Naples train station and take us on what was sure to be a wonderfully scenic hour and a half drive down the coast.

On the ground, things were a little different. Sure, it was scenic; even before we were completely out of Naples, we had stunning views of Mount Vesuvius, and then Naples itself across the harbor. What was convincing me of our impending doom, however, was that our route took us along the famous SS163, also called the Amalfi Drive.

The Amalfi drive is a 50-mile stretch of road that clings, rather precariously in places, to the rocky and hilly shoreline as it makes its way to Sorrento, Positano, and beyond. In most places it is only a car and a half wide, yet still somehow supports two-way traffic as it twists and turns its way on roads that were originally built by the Romans. In fact, in some places you can see that the rocks supporting the turns that fly out into space around a curve are still supported by 2,000+ year-old stone work.

If that’s not enough to get your pulse pounding, whenever our sister-in-law, who was in the back seat, asked a question, the driver felt it was rude not to turn around and face her to answer.

Such minor distractions of life-and-death aside, the drive was just as breathtakingly beautiful as advertised. Clear, deep-blue waters of the Tyrrhenian Sea, olive gardens, vineyards, and quaint Italian villages kept us captivated. Finally, after taking a break at a scenic turnoff to admire Sorrento from above, we cut across the peninsula and soon got our first glimpse of the town of Positano.

Italy is a land of antiquity, and this is certainly true of Positano. In the U.S., we think of buildings and sites that are 200 years-old as historic. In Italy, a couple of centuries is just yesterday—the city of Positano was there when Greeks and Phoenicians sailed the sea, possibly as early as the 5th or 6th century BC. In fact, according to one story, Positano gets its name from the Greek god of the sea, Poseidon.

Positano was a major port of the Amalfi Republic during medieval times and reached its peak between the 15th and 17th centuries. By the 1800s, however, Positano had fallen on hard times. More than half of the population emigrated to America during this period, and Positano became a sleepy little fishing village.

All of that changed in the 1950s, as Positano started to attract tourists. This trend really took off after author John Steinbeck visited and wrote an article about his time in Positano for Harper’s Bazaar in 1953. Suddenly, the formerly sleepy fishing village was attracting movie stars, famous musicians, artists, royalty, and other celebrities.  Mick Jagger and Keith Richards reportedly wrote the song “Midnight Rambler” while staying in Positano. The upper classes of Europe and the U.S. began to see it as a summer retreat, and its popularity grew.

Today, Positano is still a popular tourist destination, and for good reasons. One reason of course is the scenic beauty, which we discovered even before arriving in town. Several of the turns in the road during our approach gave us brief but tantalizing glimpses of what lay ahead.

Arriving in town is a little different from most tourist destinations. You see, over the centuries, Positano has spread up and along the rugged hills surrounding the beach and docks. For most of its history, the only transportation available was your feet or your mule. So not much of the precious land was left to waste on roads. Colorful houses seem to blend into each other, or even built on top of one another as they climb up the slopes.

Many of the homes and businesses have shared walls with their neighbors. Because of this, there are parking garages at the top of the town where you leave your vehicle, then travel to your home or lodging down the narrow alleyways and stairs that crisscross the village. Fortunately for us, there are locals with small modified scooters that will load up your luggage and take it to the beach via a concrete drainage system.

Our home for the week was a two-bedroom apartment just steps up from the beach, which a plaque on the wall informed us was the very place John Steinbeck stayed during his visit. The building is attached to the famous and iconic Church of Santa Maria Assunta. Its magnificent dome, decorated with brightly colored tiles, is considered by many to be the heart and soul of the city.

The church also represents another version of how the town got its name. The story goes that sometime in the 12th century, a cargo ship was transporting an icon of the Virgin Mary up the coast. When the ship was passing the village, it was stopped by an unusual calm. Suddenly a storm blew up, and the sailors reported hearing a voice say “Posa, posa” which means “put down”. When they turned to shore, the storm miraculously vanished and normal winds returned. They decided it was a sign to leave the icon with the church, and the cry of “Posa” is why the town is called Positano.

However it got its name, we found Positano to be a charming and delightful place, full of history, beauty, and friendly Italians. Here are just seven of the things to do in this special jewel on the Amalfi Coast of Italy.

It might seem obvious but walking around Positano is a treat all in itself. The town is literally built for foot traffic, and it is a pleasure to wind your way up and down the stairs and alleys of town. Almost everywhere you go, there are terrific views of the sea, interesting architecture, flowers and decorative plants, and art work. The interconnectedness of the structures can make for an interesting stroll—on one outing, we took a turn down a small alleyway and found ourselves in the crypts beneath the church.

Positano is a beach town, so of course you will find the types of stores that sell t-shirts, towels, sunscreen, and souvenirs of all kinds. But shopping there can be so much more than the usual “touristy” fare.

We found a shop selling handmade leather shoes, clothing stores, a man making wooden furniture and carvings, and boutiques with hand-painted tiles and ceramics. Art was everywhere – paintings, sculptures, and live music in the alleys. Even shopping for groceries is a delight, with small family-run venues selling lemons the size of softballs and grapes as big as golf balls. There were butcher shops and of course, plenty of fresh seafood. And everywhere we stopped, the locals were happy to talk with us and suffer through our bad attempts at Italian.

Most Americans have not really had Italian food. Or I should say, have not had real Italian food. There are too many wonderful restaurants to count in Positano. Some of the more popular: Ristorante El Capitano, whose rooftop seating overlooks the town and the sea; the Grotta Pallazese, open only in the summer, is set inside a large, limestone cave open to a view of the sea; or right on the beach, there’s Chez Black, La Cambusa, and the Buca di Bocca to name just three.

As you might expect, there are many delicious seafood options available, but you may be surprised to find risotto on the menu much more often than pasta.

Speaking of the Buca di Bocca, you can not only experience fine Italian food there, you can also learn how to cook it yourself. The restaurant offers several classes at various levels all during the week. I learned how to make real pizza (no tomato sauce, just spread some pesto on the dough, and add tomato slice and hunks of mozzarella), and some of the secrets of rich, creamy risotto.

As you might expect at a seaside resort, there are several options for enjoying the water. You can rent ocean kayaks, take cruises to nearby sites like the Blue Grotto, or book a fishing trip. There are schools for sailing, and learning to snorkel or scuba drive in the crystal-clear waters is truly something special. There are tour offices in town, or just walk up to one of the kiosks right in the sand to plan your adventure.

6 – Explore the Amalfi Coast or Capri

Excursions are available daily to take you to some of the nearby coastal sites. You can take short boat ride to explore Amalfi. There you can walk around this ancient city tucked into a cleft between steep mountain ranges and visit the remains of Saint Andrew in the vaults underneath the Duomo di Amalfi. Then hop a bus down by the docks for a short ride up the hills into Ravello, famous for its music festivals and the gardens of the Villa Rufolo. Or instead, take a ride to the west along the coast and spend a day looking for celebrities and enjoying the island of Capri. The ride from the beach up to town on the funicular is an experience you won’t soon forget!

If you are up for braving a ride on the Amalfi Drive again, it is only about an hour by bus or car to the famous ruins of Pompeii. Plan on spending the whole day there and arrive early, as the archeological dig covers 170 acres—there is a lot to see there. It is an eerie feeling to wander around the remains of this once-vibrant town and see parts of daily life that ended so abruptly, all the while seeing Mount Vesuvius still prominent on the horizon. The same tour companies and kiosks that arrange for boats can set you up with a bus ticket or private driver.

And of course, you could always just lay around all day and enjoy the beach. But beaches are everywhere, and it is the sights, sounds, and even the tastes Positano that make it such a unique tourist destination.