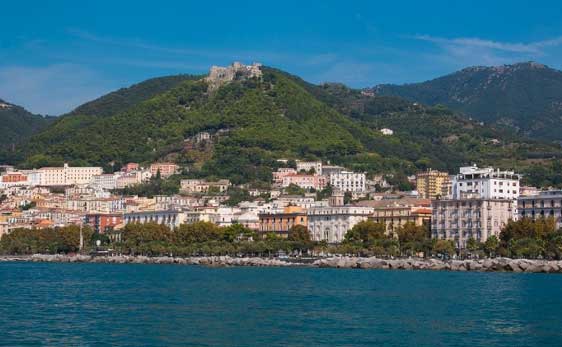 Sunny Salerno sprawls along the Mediterranean with a backdrop of hills rising beyond, a buoyant city on a glittering gulf. With 135,000 residents, it is bustling and animated, yet embraces southern Italy’s laid-back attitude. It is the gateway to the famed Amalfi Coast and the less-known Cilento Coast to the south, but is also just a short distance to green hills and mountains for varied outdoor adventures.

The city’s landmark cathedral is dedicated to St. Matthew, but with “co-patron” saints Gregory Magno, St. Anthony, St. Michael the Archangel, and four others. Apparently, the good folks of Salerno wanted to make sure all their bases were covered. The city will cover all yours, too—a spirited, seaside urban center, access to one of the world’s most famous coastlines, high-speed trains to Naples, Rome, and beyond, and an inland wealth of little-known hill towns to explore.

If it is a seaside city with year-round life you’re after, then Salerno merits a serious look. It’s often just passed through to get to the Amalfi Coast, which is a shame because the city has a lot going for it, namely a sense of friendliness, a long waterfront walkway, beaches accessible right in town, and plenty of events and activities to keep you entertained. It’s known for its movida, or nightlife, and any summer evening in the city feels like a street festival. Plenty of winter nights feel that way, too.

With two ferry ports, pleasure boat marinas, and stunning coastline right at the doorstep, it’s ideal for those who love the water and boating, or at least want to hop a ferry to the area’s seaside towns. It is also on the high-speed rail line that gets you around Italy easily.

The city has a variety of medical facilities and access to the universities and hospitals in Naples, as well. (In fact, the Schola Medica Salernitana was the first medical school in Europe, founded in the 9th century.)

The Lungomare Trieste walkway is very popular for a stroll at any time of day. There are cafes and bars for a drink along the way. There are some nice condo buildings with views facing the sea, though the shopping district behind, along Corso Vittorio Emanuele, known as the centro nuovo, is a nice area for living, as well. The centro storico is the historic quarter of narrow streets, antique buildings, and charm. The San Francesco district is convenient to those areas, a good neighborhood with services right at hand, too. There are some lovely hamlets in close proximity, above Vietri sul Mare, for those who want access to the city without the crowds and bustle.

The old town is a small portion of the city, which was heavily bombed in World War II as part of the Allied landings in Italy.  Up above on the hill is the medieval, hulking Castello Arechi, built between the 800s and 1100s. There’s a museum and restaurant with spectacular views, and parts of the structure are used for special events and weddings.

The climate is pleasantly mild in the winter with daytime temperatures generally in the 50s F, cooling down at night to lows that average around 46 degrees. Summers are hot—expect July and August days in the upper 80s and low 90s, though nights usually cool off a bit, to the 70s. Of course, the water is right there to dive in and cool down, or rent a boat to tootle along the coast.

Salerno is a dynamic city whose residents love to be outdoors and sociable. People tend to be allegra, cheerful, maybe because of all that sunshine. There is an abundance of excellent restaurants and cafes, plenty of watering holes, both low-key and upscale, take-out joints, and some international cuisine, as well. Enjoy the area’s fresh-caught seafood, the hand-made mozzarella di bufala from nearby Battipaglia, thick-strand scialatielli pasta, or rich baked ziti pasta. When you’re strolling on the lungomare (promenade) or arriving by train, a stop at Madegra is worth your while for a just-fried and still-hot zeppola (like a sugared donut) or a crunchy sfogliatella with a bit of ricotta tucked inside.

There are art museums and art-filled churches to view, the unique remains of the ancient aqueduct, civic gardens, and cultural events. The city draws big-name concerts and puts on beach parties in the summer, while the elegant and lavish Teatro Giuseppe Verdi hosts operas and symphonic music and plays.

The mile-long shopping street extends from the train station to the old town with tons of stores and boutiques along the way, sprinkled liberally with bars and eateries, as well. There are shopping malls in the outskirts, and next-door Vietri sul Mare is noted around the world for its colorful, hand-painted ceramics. (It’s also the start of the Amalfi Coast.)

Enjoy boating, sailing, swimming, and water sports, a cruise along the coast, or a ferry ride to Capri. Just beyond the city are hills and mountains for outdoor adventures, so indulge in some mountain biking, hiking, rafting, or horse riding.

Salerno is dubbed “the city of lights,” not for any similarity to Paris, but for its annual exuberant display of Christmas lights, called le Luci di Artista. Each district is festooned, but particularly the main core of the city and the Villa Comunale Park. It’s something to see! La Ruota, a high Ferris wheel, is an annual winter attraction, as well.

Cost of Living in Salerno

Like anywhere, the biggest living expense is housing. As far as cities go, Salerno is pretty average in terms of costs, with the average home sales in the city center running $350 per square foot. That goes up at the new port developments, where condos in the swanky Crescent building go for $885 per square foot! While rental prices have risen over the past few years, they come in at $1.20 per square foot as an average.

In actual terms, a few current listings give some samplings of what to expect:

Other costs are reasonable. Hop a high-speed train and get to Naples in 40 minutes ($5.54) or be in Rome in two hours or less for $56.50. The same train lines rocket to Florence, Milan, and Venice, too. A ferry ride to Amalfi costs $21 roundtrip, while a ferry to Capri runs $50 roundtrip.

Enjoy a pizza and beer for $10 to $12. A plate of scialiatelli pasta with ragu costs $9, a few dollars more for seafood toppings. There are tons of great seafood restaurants where you can enjoy a three-course meal for 35$; some have a fixed-price menu for $17 to $24. There are waterfront restaurants and Italian nouveaux cuisine, like Casamare, where a sampler menu costs $80. Of course, there is a range of options across all price points. A cappuccino will set you back just $1.42. A glass of wine at a bar with nibbles runs $4 to $6.