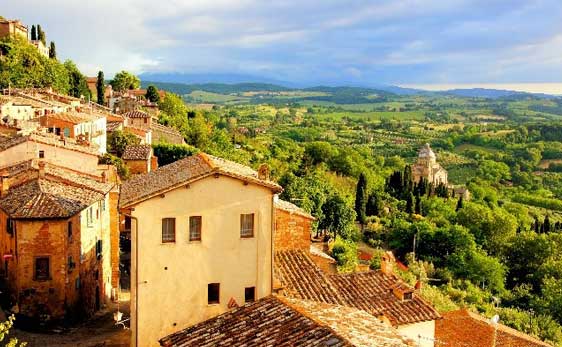 One of Tuscany’s reigning wine towns and a classic hill town with cobbled streets and ancient ambiance, Montepulciano will charm the socks off anyone. It is the quintessential Tuscan vision many have of a medieval center basking above vineyards on its sunny hilltop. Renaissance palaces mingle with medieval homes and churches, and there are sweeping panoramas over the sun-swathed countryside. This truly is postcard-worthy Tuscany.

Resting between the Val di Chiana and Val d’Orcia, two of Tuscany’s famous rolling valleys, Montepulciano is in southern Tuscany where timeless towns dot every hill and grapevines and olives stripe the land, interspersed with woods. It sits out of the super-pricey Chianti zone, but the splendid city of Siena is just over an hour away.

The pace is slow and focused on the seasons, perfect for those who want a quieter place with a gorgeous atmosphere, friendly townsfolk but also a bit of tourism influx for liveliness (but not so much it feels overrun). The famous wine, Vino Nobile di Montepulciano, draws visitors and diners from area towns who want to sip and eat in leisure.

The climate is like most of central Tuscany, with dry summers and wet winters, offering four seasons to those who like the changes. Summer temperatures average in the 80s F, though nighttime cools off often in the 60s F. Spring and Autumn are pleasant with high-60s F and 70s F. Winter average temperatures hover in the mid-40s F, but a bit of snow isn’t unheard of.

Montepulciano shows off the best of both medieval and Renaissance styles within its streets, with a dozen Renaissance-era palaces tucked in, and the perfectly proportioned temple to San Biagio down below town. The city gates, curving corso main street leading up to the Piazza Grande, and its crenelated fortress maintain the medieval charm most expats crave.

Rome’s airport is just over two hours away, while Florence airport is an hour-and-a-half, and the small inter-Europe flight from Perugia can be reached in an hour.

There is no seacoast close by, but Lake Trasimeno is only 30 minutes away.

The classic hill town appeal is what draws visitors and expats to Montepulciano, with its traditional lifestyle that revolves with the seasons and retains its rural allure, albeit in a fairly upscale way. This is wine country, and a prestigious one at that, with some noted wineries that rank among the region’s best and most beautiful. Cantina de’ Ricci is known as ‘the cathedral of wine’ for its cellar that resembles just that, while other producers have cellars in the underground chambers and passages below the city itself.

There are loads of wine bars, both homey and trendy, and the shop-line Corso is lined with boutique and stores. You won’t suffer from an empty stomach, as the small osterias, sidewalk cafes, and quality restaurants let you eat well, from simple sandwiches (panini) to a simple pizza or pasta, up to Michelin-worthy meals.

Golf enthusiasts will find three courses within an hour, and walkers will revel in the country lanes and paths that wind through picturesque Tuscan landscapes.

The nearby towns beckon to be explored -from Pienza, designed as “the perfect city” to Montalcino, famous for Brunello wine as well as its fortress and ramparts, are both close by, but the art town of Cortona and Arezzo are just 45 minutes away, as are hot springs spa towns and perfect sculpted countryside of the UNESCO-designated Val d’Orcia.

Outings to Rome or Florence are doable, both are within two hours’ reach. There is an area hospital just 30 minutes away, while Siena or Arezzo’s are both within an hour.

Cost of Living in Montepulciano

This is Tuscany, so don’t expect to find bargains, but there are some fairly reasonable options to let you enjoy that classic hill town lifestyle you’re dreaming about.

The real estate price averages at $184 per square foot, but country properties are significantly higher. In the old town center expect to pay $245,000 and up for a nice apartment.  There are several listed at $300,000 that retain the charming features and central location that many desire. One example is a 1,500 square foot townhouse on three levels with wood beams, two fireplaces, and two bedrooms, just off the Piazza Grande.

Outside the city, farmhouses in ruins cost upwards of $182,000, but one villetta newly-built home with three bedrooms and three bathrooms, and a garden is on offer at $277,551. It is two-and-a-half miles from Montepulciano and is attached on one side to another home

If it’s a renovated farmhouse you’re after, expect to pay $890,000 and more, with many fetching over $1 million.

Apart from housing costs, the majority of goods and services will be in line with the prices around Tuscany and central Italy. You can find good, reasonably-priced eateries as well as upscale and pricier places. A ‘caffe’ at the bar will set you back $1.20 or so, and a cappuccino will be around $1.50, more if you want table service on a piazza.

Groceries and utilities are in line as everywhere else, though the weekly market every Thursday brings in vendors of regional goods and loads of household items and clothing stalls, as well, for a colorful and fun way to do the weekly shopping at lower prices.

Expect to pay about $25 for a haircut with wash and style, about $20 for a manicure, and $26 for a half-day of soaking in a hot springs pool at a spa (though there are also free open-air hot springs you can enjoy, too). A glass of great local wine with snacks will cost about $6, while a pizza and beer will run $10 to $14.

Electricity is the biggest expense, and that, along with water and garbage bills, will set you back on average about $250 a month.