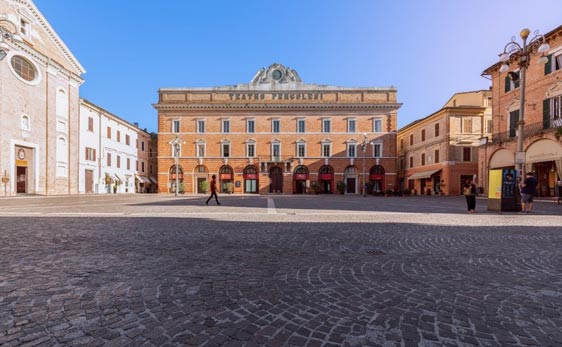 A cappuccino-colored hill town above sunflower fields and grapevines with the Adriatic Sea and an intra-Europe airport only a half-hour away, Jesi in Italy’s Le Marche region may just offer the best of everything.

Excellent wines, gorgeous countryside sprinkled with castles, and a pleasant, cultural town, Jesi (pronounced YAY-zee) is both laid-back and welcoming, while not ignoring the finer points of life. In fact, they love their lavish theater and festivals around here, but also enjoy a simple stroll and a glass of wine with friends.

Sprawling across a ridge, Jesi is a picturesque and lively hill town with palace-lined streets, bustling piazzas, and a sense of history. It retains its perfectly intact medieval protective walls along with watchtowers and gateways into the city center. The town jealously holds its history as the birthplace of Holy Roman Emperor Frederick II, whose mother gave birth to the heir right in the central piazza in 1194. Cultural and historical sites, lovely architecture, and vibrant life in the town are a few of Jesi’s attractions.

Relax with a coffee and pastry (or wine and snacks) at a neighborhood café and sample the local wines, in particular Verdicchio dei Castelli di Jesi in one of the wine bars (enoteca). There is also a brewpub for those who prefer a beer, though.

Jesi has a hospital but the region’s capital city, Ancona, is less than an hour away with its major medical centers and specialists, making it easier to get top-notch treatment.

Sitting in the hills between the mountains and the sea, Jesi offers the best of all worlds in terms of geography and outdoor activities, whether you want to go hiking or horse riding, or swimming in the Adriatic Sea.

The climate offers a four-season year without extremes. The location near the sea tempers the wintery weather, though expect a few snowflakes a couple of times a year. The average winter temperatures are in the low to mid-40s during the day, dipping down into the 30s at night. Summers bring daytime temperatures in the 80s with negligible rainfall from June through August and moderate humidity. Nights cool down to the low 70s and upper 60s with those pleasant mountain breezes blowing down.

The town itself serves up a vibrant daily life with its shops, boutiques, cafes, and weekly market. Add in the classy, velvet-draped theater, the museums, and art-filled churches and you have a well-balanced plate. Artists Lorenzo Lotto and Marche-born master Raphael enriched Jesi with masterpieces. The harmonious architecture of the town has it named as “an exemplary city” by UNESCO, with its pleasing blending of medieval and Renaissance styles.

The first week in May brings an eye-popping annual event, the Palio of San Floriano, with its parade of participants in authentically rendered medieval costumes, and games of skill that test the town’s districts against each other to win the coveted palio drape.

Jesi also sits squarely in Marche’s wine country, producing a much-acclaimed white vintage, Verdicchio dei Castelli di Jesi. But the area’s reds shouldn’t be overlooked, with Lacrima del Moro d’Alba and Rosso Conero coming from the nearby hills. Pair the wine with a rich plate of vincisgrassi, Le Marche’s lushly loaded answer to lasagne, or maybe the fine-noodles maccheroncini di Campofilone with fresh-caught fish. Sitting between the mountains and the sea gives Jesi the best of both culinary worlds. Plus, there is a handful of ethnic restaurants that please expats who might want some sushi, a curry, or something different.

Jesi also offers the best of both geographic worlds, with days at the beach or hikes in the mountains possible on any given day. The vast sandy beaches at Senigallia or the cliff-backed coves on the Conero promontory are both coveted seaside destinations.

The proximity to Ancona lets you enjoy city life and city shopping, just a half-hour away. The rail line from Ancona runs up and down the Adriatic coast, to Venice in the north and Puglia in the south. A regional airport lets you hop a flight to London, Munich, Monaco, or Barcelona, among other destinations (and connecting flights beyond Europe).

Explore the gorgeous art cities of Le Marche, like Urbino and Ascoli Piceno, and the plethora of hill towns, castles, and historical places around the region. There are plenty of expats around, too, but not so many that you will feel like it’s an enclave. Le Marche folks are friendly and welcoming with a hospitable spirit. It is never boring!

Cost of Living in in Jesi

Jesi can be quite affordable, despite its beautiful appeal and city proximity. Daily life is downright cheap, with a cappuccino costing $1.30 and a glass of good local wine at a bar setting you back only $3.50 to $5 —and that comes with nice snacks included! Enjoy a plate of pasta in a trattoria for $8 to $10. Many restaurants here offer a fixed-price lunch deal from $21 to $29, including water and a glass of vino. Even the upscale Dietro Le Quinte has tasting menus from $52 to $76, and a business lunch menu for $35.

You’ll also notice that many restaurants tend to even out the bill to a round number, always by rounding it down.

Furnished rentals can be found from $550 a month. There are some very nice ones to choose from, both one and two-bedroom apartments, between $600 to $800.

The real estate market is also pretty affordable, too. A townhouse with a terrace, courtyard, and garage is a rarity in town, but there is one in Jesi, with two bedrooms and two bathrooms, listed for $133,339. It could use some new paint but otherwise is in great shape, and has a big country kitchen. (SEE: https://www.immobiliare.it/annunci/88370455/)

A modern apartment in the newer part of town with a garage and easy access, a balcony, and a new kitchen is move-in ready. It has two bedrooms and air conditioning, with a price tag of $148,413. (SEE: https://www.immobiliare.it/annunci/86114178/)

There is a ready-to-go B&B country house with 11 bedrooms and 12 bathrooms, situated in the placid hills only five kilometers from Jesi. Totally restored, it has a lovely covered terrace with views of the country down to the sea, a swimming pool, and retains its farmhouse charm but with modern bells and whistles. It has been separated into two apartments that can provide income as well as living quarters, with an asking price of $660,900. (SEE: https://www.gate-away.com/properties/marche/ancona/iesi/id/397580)