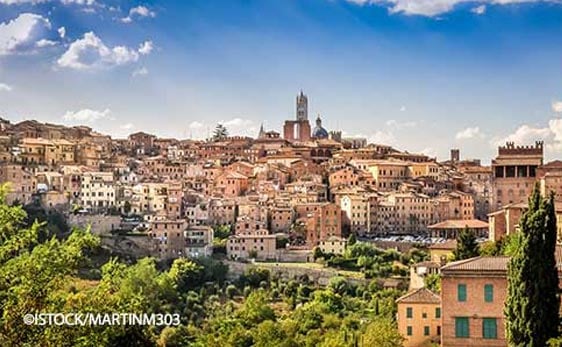 Siena, Italy: The Embodiment of a Medieval Cityscape in Tuscany

Without a doubt, Tuscany is the best-known and most revered region in Italy. Every year, millions of people flock here to see the famous landscapes and art treasures that Tuscany is known for.

While Florence is the region’s Renaissance epicenter, Siena is its best-preserved medieval city, and has made UNESCO’s World Heritage List as the embodiment of a medieval cityscape.

Siena draws its fair share of visitors, too. With its position right in the middle of Tuscany, its art and cultural events, Old World charm, well-kept city, and upscale lifestyle, it’s ideal as a retirement destination. In fact, it tops Florence for best quality of life in Tuscany, and ranks in the top tier for livability in Italy, in Italy’s respected financial journal Il Sole 24 Ore.

Of course, its setting amidst the Tuscan hills, and its proximity to Florence make it a desirable city, but its own breathtaking views give it an extra edge. The centro storico is an endlessly fascinating place to stroll amidst the narrow-cobbled streets, with well-kept townhomes with their wrought-iron balconies, massive wooden doors, and vibrant flower boxes. Art-filled churches, vibrant cultural events, and one of Italy’s most beautiful and celebrated piazzas make Siena an attractive place to visit or live.

Wrapped in medieval grandeur, Siena has kept the urban plan and appeal it built when it was a mighty city-state that waged war with Florence. And, to this day, the two cities still spar a rivalry.

Siena is a city that appeals to all the senses. While it has sprawled out with modern suburbs in more recent years, the center of life is still in the heart of the old town. That means you can live right in the midst of everything with plenty of services, restaurants, cafes, museums, and events within a short walk of home. The famed Palio is only one of the city’s annual events; there are food festivals, music events, and special art exhibits throughout the year.

Siena is a city that invites you to wander and soak in the ambiance among its pretty cobbled lanes. Here you’ll find artisan shops, upscale boutiques, delectable pastry shops, and neighborhood delicatessens tucked in among the brick buildings, so uniformly colored that it gave the name to the hue “sienna”.

The climate is like most of Tuscany, with hot summers and chilly damp winters, and mild in-between seasons. The hot season doesn’t last too long, mostly just July and August, and the winter’s chill doesn’t usually take the daytime temperature much lower than 46 F. Night-time temps go down closer to freezing in February. The rainiest months are February, March, and May, while summer usually sees a long, dry, sunny cycle.

Italy’s national healthcare system is ranked at number two by the World Health Organization, giving you excellent medical care, whether you choose the private or public facilities that are available in Siena or surrounding towns.

Siena is home to two universities; the University of Siena, which was founded in 1241 and is among the oldest in Europe, has a vibrant presence of about 15,000 students, and Università Stranieri Siena (the University for Foreigners) accepts students from around the world to study the language, art, and architecture of the city and Tuscany.

The spacious and shell-shaped Piazza del Campo is one of Italy’s jewels, a lived-in space that acts as the city’s hub. The square’s focal point is the town hall, not the cathedral as in most piazzas, demonstrating that the Senesi value their civic pride. The sculptural Fontana di Gaia is the city’s version of the Trevi Fountain, and a short walk away is Siena Cathedral—a massive ornate building that dominates Siena’s highest point. It is an explosion of Gothic glory with mesmerizing works by Michelangelo, Bernini, and other masters. There is also a vibrant art and music scene, with a music academy, an orchestra, and two glorious theaters.

The area’s plump pici pasta strands are dressed in porcini mushrooms or the zone’s cherished pork, cinta senese, and Chianti wine flows like a spigot. There are a range of bars, from trendy to historic to homey, where you can settle in and enjoy your coffee in the morning and your pre-dinner drink in the evening.

As if the city itself didn’t offer enough enjoyment, there is all of Tuscany at hand, so you can easily enjoy an outing to the region’s acclaimed hill towns, wine country, and manicured gardens. Florence is just a train ride away at only 1.5 hours, and regional trains and buses service the surrounding areas. There are airports in nearby Pisa and Florence, or a three hour journey to Rome make jaunts around Europe possible.

The location, impressive architecture, and quality of life come at a price, so Siena isn’t cheap. Expect to pay at least $324,733 for an apartment in the centro storico. The average price per square foot is $385. Go to the periferia or suburbs and prices edge down a little, as does the charm. The outskirts average $328 per square foot.

Renting isn’t as exorbitant as you might think. There are apartments ranging from $754 to $1,508; the upper end gets you an apartment in a palazzo with frescoed ceilings and a loggia.
Cost of Living in Siena

The city carries a moderate cost of living, apart from housing. The cost of produce and groceries are average for Italy, and while there are pricey restaurants, you’ll just as easily find an affordable trattoria for a meal out. Local fresh markets provide regionally-grown produce and an enjoyable atmosphere, and there are still lots of family-run vegetable stores and delis, along with supermarkets for your daily goods. You can get a whole bag of fresh veggies for around $6, and your grocery bill isn’t likely to topple over $300 a month.

A cappuccino at the neighborhood bar will run you about $1.50; add in a cornetto (an Italian variation of the French croissant) for breakfast for another $1.50. A pizza with beer costs about $12. Dinner for two with some of that good Tuscan wine will cost you only about $58, but a simple plate of pasta with a glass of wine can be a budget-friendly $20 in a humble trattoria. A movie at the cinema is about $9.86. Sitting down at a cafe for an aperitivo, which comes with nibbles, will add up to about $10, and often less.

Electricity along with water and garbage bills will set you back on average about $200 a month.

Here’s an example of a monthly budget for a couple living in Siena.