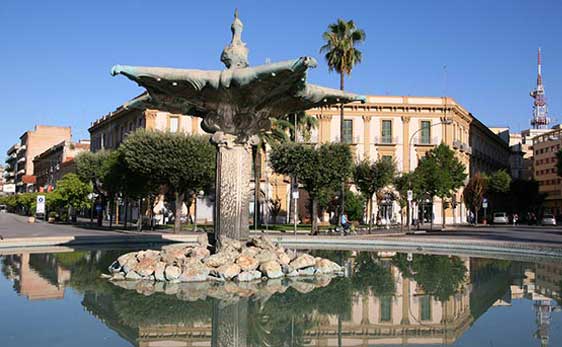 At first glance, the city of Foggia, which is also the capital of the province of Foggia, in Puglia,  Southern Italy, could be any major urban capital. But scratch the surface, and you’ll find a rich history with cultural remnants from eons ago.

Emperor Frederick II left his mark on Foggia where remains of his palaces and castles from the 12th century still stand today. The historic treasures of subterranean vaults under the remains of one of Frederick’s palaces, called urban hypogea, can even be explored with only a free online reservation.

The historical city center of Foggia has many beautiful examples of architecture through the ages. A lively farmers’ market, which draws vendors from all across Puglia, converge weekly to sell produce, meats and cheeses, housewares and linens, clothes, and furniture. You can outfit your entire house—and feed your hunger—with one trip to this popular market.

Foggia the town is not on many tourists’ radar because its appeal lies in its proximity to other provincial jewels, such as the Gargano Peninsula and the Tremiti Islands archipelago. As a capital city, it’s a comprehensive hub for trains and buses, so traveling throughout the Foggia province (and to other regions outside of Puglia) is easy and economical.

Foggia has a plethora of big and little shops, banks, pharmacies, parks—everything you’d need to live comfortably. And because of its transportation network, it’s an ideal base for exploring the greater Foggia province and all of the Puglia region. The Passo di Corvo lies only a couple of miles from the city’s limits; this 5000 to 7000-year-old Neolithic settlement was accidentally discovered during WWII and makes for an exciting and informative excursion as a living museum.

Cost of Living in Foggia

Its lack of popularity as a tourist town means a lower cost of living year-round. A 1,000 square foot unfurnished apartment can rent for $530 a month. A 900 square foot apartment, fully furnished two-bedroom, two-bathroom can be had for $560. With housing costing so little, you have more disposable income left over for the fun things of life, like eating, drinking, and exploring.

Food is inexpensive in Foggia, particularly if you shop like the locals at the farmers’ markets for your fresh produce, fresh fish, and fresh cheeses. Plus, large stores like Coop and Penny Market give you additional outlets in addition to your local macellerie (butcher shop) or caseifici (dairy farm) found throughout the city.

An abundance of snack bars, cafes, and trattorias in Foggia give you plenty of dining options depending on your mood and budget. Twelve-inch focaccias and pizzas cost less than $5 (large enough to share unless you’re like me).  Puglia invented the ‘povera cuisine’ (poor people’s food) out of necessity, but fortunately, it’s delicious and healthy with its focus on fresh, local, and organically raised. In fact, it’s the real Mediterranean diet that is touted by health professionals.

The award-winning L’Orecchietta restaurant is worthy of your culinary attention for a special meal. It features authentic regional specialties and also showcases local historic tools in its museum. Quite unique. Quite delicious! Despite its extensive menu, you don’t have the problem of choosing; they bring it all to you! For $30 each, platter after platter of regional dishes are brought to your table. Slow roasted vegetables paired with fresh-made cheeses, garlicky artichoke hearts in fresh-pressed olive oil, fish, meats, antipasto platters, bottles of wine, and of course, desserts. Housed in a stone building, lined with shelves of antique pots and pans, this meal is a memorable experience.

Healthcare is also substantially cheaper than in the U.S. A doctor’s visit might set you back $30 to $60. Dental work and prescriptions are so reasonably priced as to be out-of-pocket, affordable expenditures. And if you become a legal resident, you can apply for the government healthcare card, which ranges from free to hundreds per year depending on a province-wide algorithm.

Below is a sample budget for a couple living in Foggia:

Fun Things to Do in Foggia

2. Tour the ornate cathedral of Foggia that dates to 1100.

3. Plan a shopping trip to the weekly farmers’ market, currently held at the multiplex theater complex, for all your household goods and foods. Or browse the interesting stalls for unusual icons of Foggia lifestyle.

4. Explore the ancient, Neolithic village of Passo di Corvo, a few miles outside town, and vividly imagine life from 5,000 plus years ago.

5. Spend a day or two, or three, visiting the Gargano Peninsula. The Parco del Gargano is a feast for nature lovers to hike or bike. There is also spiritual significance to be found at the Monte Sant’ Angelo and its Grotta Sacra (where it is believed the Archangel Michael appeared) and at the Abbey di Pulsano. Occasionally you can take iconography classes at the Abbey.

6. Take a day-trip ferry ride to the Tremiti Islands, the Adriatic’s only archipelago.