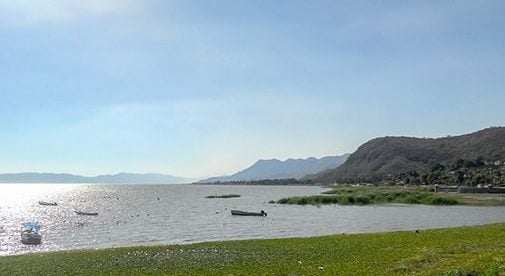 The shores of Lake Chapala with the mountains in the background.

Originally from Western Pennsylvania, the couple retired to Ajijic a decade ago. The once tiny fishing village is about 45 minutes from the big city of Guadalajara and three miles from Lake Chapala, Mexico’s largest lake. “We came for two weeks at a time for three years,” says Gabrielle.

These visits helped the Hendersons get familiar with the area and way of life so it was an easy decision to move full-time.

It was also easy to fall into a groove. Gabrielle says, “When you first move here, there’s so much to do. You have to find your niche. I used to golf, feed the kids at the orphanage, walk the dog, go swimming in our backyard pool.”

She continues, “Ajijic is also known for being artistic. There are a lot of theaters, these are mostly run by Canadians and Americans.”

Downtown, the shops line the cobblestone streets and are painted vibrant shades of violet, burgundy, and yellow. The lake is Mexico’s largest at 50 miles long and 14 miles wide. The surrounding Sierra Madre mountains complete the postcard-perfect view.

The temperate climate and scenic views have long been popular with expats. It’s also a weekend destination for those from Guadalajara. There is a lot of recent development. According to Gary, there’s “million-dollar homes on the side of the mountain. There’s also only one highway in and out of town and it gets crowded.”

Originally from Johnstown, about 70 miles from Pittsburgh, Gary’s family was in the funeral business. Gabrielle worked as a pharmaceutical rep for a big pharma company. In 2008, Gary sold the business to his brother, the couple sold their house in Johnstown and moved to the Lake Chapala-Ajijic area full-time.

They bought a spacious 2,800-square-foot home just outside of town. There’s a terrace upstairs and down, with a swimming pool in the yard and enclosed garage. It was $325,000 when they bought it a decade ago. Gary says, “Housing prices are comparable to where we came from in Pennsylvania.”

However, other costs are low. The temperate climate means they don’t need air conditioning and food is a third of what it is in the U.S. The couple enjoy dining at quality restaurants. “We can have a nice steak or fish dinner for $20 for both of us,” says Gary.

Gas is pricy at $4 a gallon, but they just bought another car and didn’t even get insurance because bodywork can be as low as $50.

The Hendersons do have some advice if you’re planning a move abroad. “Understand the definition of mañana—it doesn’t mean tomorrow. It means not today. Be ready for a laidback style of life.”

Gabrielle adds, “Don’t bring your stuff. It’s expensive to bring your goods. Most houses you’ll buy or rent will be fully furnished with utensils, pots, and pans. Also, have an open mind and remember you’re in a foreign country. Be respectful.”

Finding A Purposeful Retirement Along The Mexican Caribbean

A Second Beginning In The Expat Haven Of Ajijic, Mexico