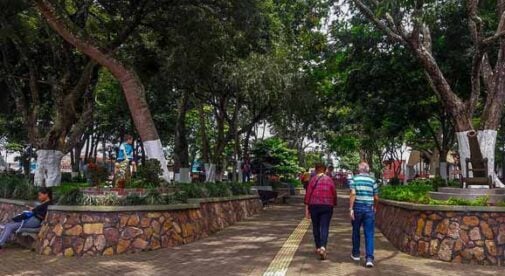 When people want details about my life in Costa Rica, I never fail to brag about its excellent medical and dental services. There’s a multitude of choices on tap for locals, expats, and tourists alike.

Newcomers here are often pleasantly surprised by the attention that doctors and dentists give to their patients. For example, most primary care doctors hand you their card and tell you to call their cell, in case of questions. Also, getting an appointment fast is usual, even with specialists.

Maybe in a few days, certainly by the following week…sometimes even the next day! Note that my experience is mostly with private medical providers. That’s what I’m describing. The Costa Rican government also operates a well-regarded national healthcare system for citizens and residents—the Caja. Many people access both.

Now, back to my ordeal…

Down from my coffee country village, I strolled along a bustling street in the university town of San Ramon de Alajuela. The gray sky overhead threatened rain, but the temperature was delightfully warm.

Preoccupied with shopping lists and errands to run, I felt a sudden stabbing pain on my back…as if someone had poked me with a hat pin! Next, a warm heat coursed through the upper right side of my body in a flash. Then I knew that an insect (bee? wasp?) had stung me.

I am allergic to insect venom.

I let out a little shriek—frantically pulling on my blouse to find the culprit. A man loading up a truck dashed over and asked what the problem was. I blurted out “bee allergy” in Spanish.

I had thought the insect was inside my clothes, but the man spotted it on my shoulder and quickly removed it.

Whatever kind of stinging bug it was, it had stung me through the fabric. A lucky break in retrospect—less venom meaning a weaker reaction.

Sure, it came to mind! But how long would it take to arrive in a pandemic? Finding help on foot seemed wiser since I was mere blocks from the town center.

Red swelling was so far limited to my right side, my entire arm, and hand. My airway wasn’t closing…yet.

San Ramon Hospital—a nearby public facility where anyone can get emergency treatment for free—would ordinarily have been a good option but given the pandemic, I nixed that idea. Instead, I headed towards a nearby pharmacy, which was several blocks closer anyway. By the time I got there, my left arm and hand had also swollen up and turned red.

The allergic reaction was spreading.

La Bomba pharmacy is a discount chain with low prices. I’m a regular customer. On that Wednesday afternoon, only one client stood at the counter, facing four cash registers. A young man who had helped me on previous occasions quickly offered assistance. (In Costa Rica the goods are stored on shelves behind glass; pointing at what you want is easy.)

English is spoken at La Bomba. (Same as most pharmacies here.) I plunged right in using Spanish, though. I told the clerk I had been stung, was allergic, and held up my red and swollen arms. Startled, but on the ball, he asked if my throat was closing up. Thankfully, I could honestly reply “No”.

The clerk ran to the back and returned with pills. He handed me two cortisone tablets and a  large anti-histamine before he even rang up the sale. I swallowed them at once, water bottle in hand.

Sitting down on a chair, I waited.

In a matter of minutes the swelling began to go down, the crimson color started to fade as well. The clerk still watched me closely, concerned. He told me that two more days of the same meds would do. The cost was less than $10.

I still wanted to get checked out by a doctor so I decided to go to a private clinic.

As a birthday treat, I had gone to Dr. Salazar, a dermatologist at the Renova Clinic, for a facial chemical peel. I now remembered that a big sign posted outside read, “Urgencias” (emergency treatment). So I walked the several blocks from La Bomba to this private clinic.

The receptionist recognized me and as I’d been before all my details were in the system. (My vanity dermatology procedure paid off in an unanticipated way!)

A doctor was called, dashing in a few minutes later. Finding my lungs clear and my throat open, he prescribed an IV drip for 40 minutes. Needle inserted and taped in place, I lay down on a comfy chair in a clean, quiet room, resting as the medication did its job.

After that, the doctor examined me again. He also looked over the meds from the pharmacy and deemed no further prescription was necessary. I left the clinic after spending a little more than an hour there. The total bill was $73 and except for some tiredness, I felt and looked normal again. What a relief!

San Ramon, where I had my medical emergency, is called a city, but it’s really a provincial town. Yet there were many options to get help quickly and affordably.

So I can now further attest to the variety and quality of Costa Rican medical care. I just wish a dangerous sting didn’t put it—and me—to the test that day!