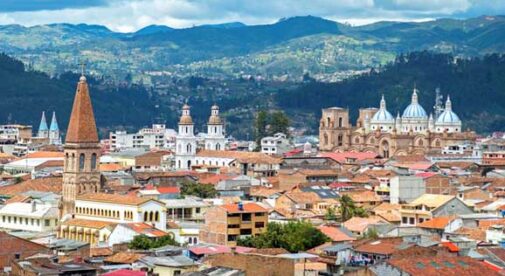 Jodie’s new home is the charming town of Cuenca, Ecuador in the Andes Mountains.

As a kid growing up in New England, Jodie Mansfield would read the Cherry Ames series of books and follow the adventures of the traveling nurse who solved problems and captured criminals while traveling around the country. “It helped me start thinking about traveling,” says Jodie. “I also studied about The Strait of Magellan and going around Cape Horn, the southernmost tip of South America. As a kid, I never thought I’d be going around Cape Horn, but now because I live in Ecuador I’ve gone around the Strait several times. “

Jodie’s love of travel expanded when she joined the Navy at the age of 27, which opened the door for her to travel abroad. “For eight years, I got paid for traveling around the world.” After she left the Navy, she continued traveling by taking jobs long enough to save up for a trip and found herself resigning from jobs if it interfered with a fun cruise she just couldn’t pass up.

“I kept quitting jobs to go on cruises. Pass up going to Italy? I don’t think so. I’m going,” she says. But after a few years, she realized she couldn’t go through her life just working odd jobs to pay for travel. So, she spent eight years working in the corporate world, but being stuck at a desk all day wasn’t the life she wanted to live.

Instead, Jodie decided to get into the cruise business after going on around 30 cruises and was elated to find travel perks were part of the job. And today Jodie works our of her Cuenca, Ecuador office arranging cruises for her clients as an independent cruise agent and has sent people everywhere from Vietnam to the Baltic Sea.

Her journey to Ecuador started in 2014 when she began researching places to retire abroad. When the recession of 2008 impacted her finances, she needed to find a place where she could live comfortably on her Social Security. She also wanted to get away from the blizzards and snow and escape the high cost of living in New England.

“I wanted to get away from the stressful living in the United States,” says Jodie. Single and living on a modest, fixed income, she settled on Cuenca, Ecuador, a UNESCO world heritage site known for its Spanish colonial and French republican architecture.

Cuenca checked off everything on her retirement list: temperate climate, low-cost living, affordable healthcare and the kindness of the Ecuadorian culture. She also liked that she was in the Andes mountains in a town of 450,000 surrounded by four rivers.

“I don’t need a car here because taxis cost around $3, and I also don’t need heat or air conditioning because the weather is spring-like,” she added.

After settling in Cuenca, Jodie started getting involved in helping people with filing for their visas and started VisaAngels to help expats who couldn’t afford more expensive alternatives do it themselves with trained assistance. VisaAngels charges a nominal fee to cover business expenses and because Jodie had helped so many people through the years, she had developed a large rolodex of friends. Although VisaAngels fulfilled her need to help people, it also was taking so much of her time that she’d put her travel dreams on the back burner, so Jodie decided to find a way to combine her love of cruising to help underwrite her travel.

When one of her former bosses offered her a position selling cruises in the U.S., Jodie had already moved to Cuenca and he said, “Great. South America. There’s lots we can do from there.”

Jodie is a fearless dynamo. When she announced to her new bosses that her first cruise to market would be one around Cape Horn, they were skeptical. “For most people, they had visions of rough seas around the bottom of South American continent where three oceans collide to form waves that in bad weather could be 65 feet high,” explains Jodie. But that did not worry her.

Jodie has found many expats move to good-value Ecuador so they will have enough money to travel. So, the fact she’s in the Andes mountains hasn’t interfered with her ability to plan and sell exotic vacations. She usually organizes two to three cruise trips a year. And she also continues her work to help expats get their visas.

“I am not working for money as my motivation. I just want to go somewhere and travel,” she says. But now she doesn’t have to quit her job to see the world.

Jodie and six others from Cuenca are going on a World cruise soon with MSC cruise lines. “It is 115 nights, and we board the ship in Rome, Italy, go to 52 ports of call in over 30 countries and end up in South Hampton, England. We will spend two weeks in Brazil including going down the Amazon on a cruise ship. Hitting the Caribbean, South Africa, Israel and visiting my daughter and family in Iceland.”