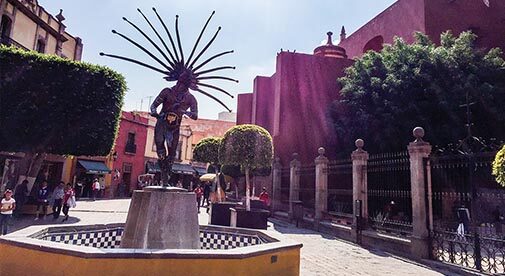 Querétaro is a riot of color and spectacle whatever time of day or night. ©Jason Holland/International Living

Over a year ago, my wife, Terry, and I left behind the family-raising decades of our life in Silicon Valley and launched the next phase, heading off to Guanajuato, Mexico. On the way we stopped to visit a friend in the nearby city of Santiago de Querétaro (generally referred to as simply Querétaro)…and never left.

I suppose that to a casual observer our life today in a COVID-subdued world might appear mundane. Yet hardly a day passes without an exchanged glance followed by one of us exclaiming how fortunate we are to be living in this magical place at this time.

We love live music and the performing arts, which are professional, abundant, and mostly free here. Unfortunately, live performances in public are on hold for the foreseeable future. Despite this, we regularly witness extraordinary productions.

You see, our apartment includes a spacious rooftop terrace featuring a spectacular cactus garden and commanding views over much of this city’s old colonial sector, el Centro Histórico. A mere flight of stairs transports us from the humdrum life at street level to the magic above.

We usually start with an early show around sunrise. Fortified with a light jacket and a mug of strong, hot coffee we climb our stairway and claim our front row seats to take in the opening performance of the day.

The performers warm up their voices. Like orchestra strings getting into their groove, the birds assert their presence with a wide-ranging variety of sounds. There almost always seems to be a singer with a new melody to broadcast. Oh my! Not only do they sing, they perform aerial acrobatics across the sky to match.

Red, gold, and yellow enflames the sky to the east.

Anticipation builds as all the players focus on their coming part in the production, haphazard as it may be. On the hour (well, more or less), church bells chime across town from the bell towers standing on nearly every block. Almost unnoticed, a steady brightening of red, gold, and yellow enflames the scattered clouds to the east, like sentinels heralding the looming entry of the maestro.

Then it’s showtime. The sun bursts above the horizon. The cityscape dazzles in the rising sunshine and the skies come alive. Now the virtuosity of the avian performers steals the show.

The doves keep a safe distance from the others and let out a pair of crow-like croaks as they stick a landing on a high perch. Catching their breath, they release their more familiar “Coo, coo, coo….” Surely other doves understand.

Great-tailed grackles fly their solo runs with purpose, as if on a mission. Numerous flocks of small birds pass by in the direction of the rising sun. Why?

Like a morning rush hour, the streets in the sky are getting busy and crowded. Closer to home, a hummingbird hovers in our face to check us out, pausing just long enough to determine that we are not threatening to raid her nearby blossoms.

The stars of the show are the small, dark, zip-zap darters: one moment soaring high and the next diving, perhaps to ward off a possible territorial interloper. Still other times they appear to fly in pairs like the most accomplished of ice dancers—except that they’re performing in three dimensions—one following the other in dizzying zig-zag movements.

Occasionally a pair of parrots flash an iridescent green plumage streak across our view. Escapees from some urban cage? Each subsequent reappearance reassures us they are adapting well to their freedom.

We cannot leave this scene without mention of the roof cats. What are these walk-on characters up to? These phantoms appear out of nowhere. Coming? Going? They navigate the rooftop terrain with feline agility (well, they are cats…). They see us and fix a wary gaze on our presence, moving slowly away as if we might pose some threat.

While we imagine we could sit here all day, breakfast beckons and soon the sun’s presence will drive us to seek the cooler shade below and deal with the day’s tasks.

Nightfall on the terrace refuge plays out almost in reverse. The birds still move deliberately, though with a certain frenzy as if in a hurry to fulfill the day’s needs before darkness settles in.

The roof cats are back at it—whatever “it” is. They’re a different cast of characters this evening. Morning or twilight, now and then they pause, arrogantly, beneath some flying prey perched on a wall.

Often, when the mix of clouds is just so, the serious acrobatics of the birds are upstaged by the light show of sunset. From our rooftop, the horizon is so vast that we sometimes get clear skies in one direction and in another, mixed clouds. Those reflect and refract the sun’s rays in a panoply of colors that never saw a palette. On another occasion, a distant thunderstorm raged, with lightning bolts lashing the earth and rain pouring down. Utterly jaw-dropping.

As the sun sets, we return below for dinner, exhilarated by yet another astonishing Querétaro light and sound show. Who knows what tomorrow’s will bring?

If performances with nature’s singers, dancers, actors, light technicians, and musicians bookend each day, what do we do between sunrise and sunset? Well, that’s perhaps a story for another day. We just think ourselves fortunate to be here.