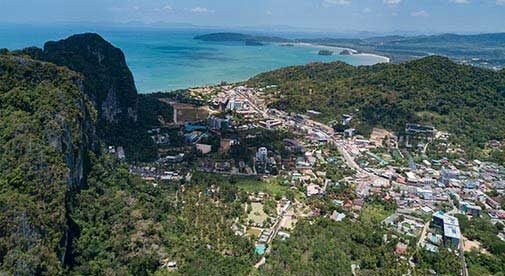 What used to be a forgotten fishing village is now among Thailand’s most up-and-coming locations. ©Yourbordo/iStock.

A word of warning about traveling in Thailand: unless you are very lucky indeed, you will end up having to listen to someone telling you, at length, about how much nicer it was 10, 20, or even 30 years ago. Those stories should be taken with the proverbial grain of salt.

Undoubtedly, there are areas in the country which suffer from more tourist footfall than is healthy, but remember, with tourism comes investment and infrastructure. Thailand in 1990 had far fewer hotels and resorts, but also far fewer hospitals. And while it’s nice to spend some time on an undiscovered island with nothing but virgin jungle and white sands, actually living overseas has other demands: supermarkets, dental surgeries, an internet connection, a place to hang out and meet friends.

Ao Nang has all those things, and a whole lot more besides. A strange sort of beauty-inflation happens in this part of the world. Walking along the beach promenade at sunset is a revelation. Out to sea, the horizon is cluttered with islands and outcrops, steep-sided limestone teeth topped with a fuzz of wooded jungle. Closer to shore, a headland adds drama to one end of the beach, while on the other side, a sandy causeway leads off to another small island, the first of many receding into the distance. A setting sun gilds the whole tableau, and anywhere else, you’d be content at having witnessed that.

However, just a mile or two away by water-taxi, Railay Beach beckons. Jump on a long-tail boat for a 20-minute ride to this cluster of bays, and suddenly Ao Nang beach seems lackluster. It’s not, of course, it’s just that it seems there’s always a more spectacular sight around the corner in these parts. Railay is the beach of everyone’s dreams—the sand is fine and white, the karst cliffs tower vertically overhead, the cerulean water is warm, and the backdrop is deep, green, tropical forest. But it’s crowded with day trippers. (Hire a kayak for $6 an hour and you can easily paddle off to find something more remote, more personal.)

At a certain point, though, you simply have to stop and learn to appreciate what’s in front of you. You could spend your life exploring the islands and beaches of Thailand’s western gulf and Andaman coast. The more effort you put in, the more reward you get—climb a steep headland and you’ll find another view, take a charter boat a little farther and you’ll get a beach all to yourself, trek a little deeper into the woods to find an unspoiled clearing populated by hummingbirds, hand-sized butterflies, and birds of paradise.

Eventually though, for your own sanity, it’s worth learning to let go. True, there may be more rewarding vistas just over the horizon, but the place you’re in now would probably be considered a top beauty spot in any other country. Thailand simply has an abundance of picturesque locations, and you’ll go mad trying to find the definitive one.

It’s a topic that comes up in conversation with Jeff Johnston as he, his wife, Sue, and I meet for early evening sushi and drinks at the open-air food court in a development simply (and appropriately) named Landmark. It’s showroom-new, with condo blocks, communal recreation areas, a large stadium with nightly muay thai (Thai kickboxing) tournaments, and an artificial lake on landscaped gardens that were, at least when I was there, still in the early stages of growth. An evening breeze off the sea, just 200 yards away, was enough to keep any mosquito attention to a minimum.

Jeff is finding a lot more time for the gym.

“There’s a river just a mile or two behind us,” Jeff told me, gesturing toward the northeast. “You should check it out. You can take a boat into the forest; it’s really worth seeing. It’s a completely different Thailand to the one you see here. Much more traditional.” Jeff ’s story of coming to live in Thailand is a happy one. Like a lot of expats from the U.S., his health has improved enormously from a combination of better diet, outdoor living, lower stress, and more affordable living, and he’s finding a lot more time for the gym these days than when he was working in electrical project management in Southern California.

All the same, even long-term residents get that urge to find the definitive Thai view, that ultimate pristine beach, the superlative temple. Sue works with a travel and tours company, which helps. When there’s an unsold space on the boat or in the bus, Jeff gets to tag along. “We’re headed to Koh Lanta tomorrow,” he says. “It’s pretty much the least developed of the big Thai islands. If you’re looking for the authentic Thailand, that’s where to find it.”

Ultimately, though, I’m not. I’m looking for places where expats can live, not visit. It’s a crucial difference. But Jeff and Sue are good examples of how to get the best of both worlds. They live in Ao Nang but use it as a base to take trips into the region and even surrounding countries. It’s as interesting for Sue as it is for Jeff because she’s originally from the northern province of Issan. Since they moved to Ao Nang, she too has enjoyed the chance to explore.

Ao Nang has a lot going for it as a base. Although it’s fast becoming a full-fledged town in its own right, at the moment it’s still something of a beach resort satellite of nearby Krabi town. Krabi is where the large supermarkets, hospitals, big box stores, and international airport are located. It’s about 25 minutes away by shared taxi, which costs around $3.

The route is truly notable. It passes from cityscape to laidback beach town via a highway which threads between cartoonish limestone karst pinnacles bursting vertically out of fields groomed for agriculture. Seeing these abrupt walls of 200-foot tall rock jutting out of cabbage fields, like some sort of geological-scale gravestone, is enough to give you whiplash as you twist to get a better view. Truly spectacular.

For day-to-day needs, there’s no reason to leave Ao Nang.

Actually, for day-to-day needs, there’s no reason to leave Ao Nang. As in beach resorts across the globe, the practical amenities are mostly nestled away out of sight of the main drag, but they are there. About a mile inland, and upward, from the beach, Ao Nang’s branches of the rival supermarket giants Makro and Tesco Lotus squat, glowering at each other across the main Krabi road.

Visiting either one of these super markets is an exercise in reverse culture shock. We should, given how obsessed our media culture is with presenting Asia as the font of all technological modernity and innovation, be better at dealing with this but…I find Thai supermarkets to be mind-boggling. Not because they’re any different from our own, but because they’re so familiar.

If your idea of grocery shopping in Thailand involves a mental picture of haggling with grandmothers over the price of a still-flapping chicken, while trying to indicate via comical sign language that it’s quite OK, you don’t actually want the feathers or feet, well, that’s by all means an available option. Any cluster of population comes with markets where you can come by that sort of experience. But walking into the air-conditioned expanse of the local Tesco is an entirely different deal. The doors slide open automatically, the entry foyer is arrayed with soft furnishings, special offer displays, and houseplants.

Farther in, the supermarket aisles are stacked and ordered by department, chiller cabinets stock beers and sodas, and, well, it’s just exactly the same as you’d expect from a Safeway in Rochester, New York or Holbrook, Arizona. That’s quite comforting when you’re in the country long-term. Sometimes it’s nice just to fill a cart and bypass the theatrics of the street market.

To get the best out of living in these parts, some sort of personal transport makes sense. Shared minibus taxis, motor-tricycles, and cabs are available in Ao Nang by just waving one down or making arrangements with one of the many travel agents on the main seafront road. Grab is a local service similar to Uber, which you can easily install on a smartphone. Also, as is the case elsewhere in Thailand, the option of taking a motorbike/moped taxi is always there—just wave down one of the passing riders with high-visibility vests and negotiate a price.

Long-term, though, it’s worth investing in your own motor scooter. A 125cc Honda is the most popular option and serves the needs of most expats in the area well. With one, you open up the backroads and interior districts of Ao Nang, which is where the property bargains are to be found. On my trip to the region, I had a look at some apartments in the seven-floor Rocco complex just a half-mile inland from Ao Nang beach.

While the accommodation was high-end, with quality fittings, sea views, air conditioning, balconies, and subdued décor in the furnished apartments I viewed, I thought the asking price (starting at around $100,000 for a one-bedroom apartment with mountain view and moving up to almost $320,000 for a two-bedroom with a sea view) was a touch optimistic.

Bear in mind that Jeff and Sue, mentioned earlier in this article, are paying less than $300 a month rent on their modern one-bedroom home with patio just a few miles north of Ao Nang town, and that purchasing property outright in Thailand comes with some challenges of its own (it’s possible for expats to buy a home there, but it involves some legal legwork that’s quite off-putting). Marc Cofer, another U.S. expat in Ao Nang, describes detached, three-bedroom homes in pleasant residential communities with community pools renting for less than $1,000 a month. Pick your price-point and there’ll be something that fits.

Overall, we generally suggest that expats anywhere spend at least a year renting in their new location before committing to a property purchase. That applies to Ao Nang too, although if I had to choose anywhere on the planet to spend a year deciding if it were for me, this on-the-up slice of extremely affordable coastal luxury is high on my list of places to consider.

How to Move to Thailand