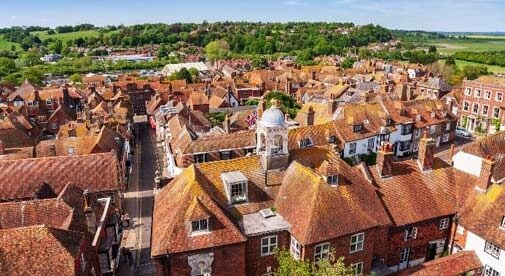 Rye, in East Sussex, is one of those places that just drips with history and interesting sites to see from tales of smugglers and shipwrecks to writers and wars. The town itself is just over an hour by train from London. But you should plan on at least two days here as there is so much to see and do.

Here are the best things to do in Rye, England:

One of the first sights to impress most visitors is Mermaid Street. The narrow-cobbled street is one of the most photographed scenes in England. The view looks down the Mermaid street with the Mermaid Inn on the right and old crocked timbered cottages and shops on the left.

2. Stay a Night at the Mermaid Inn

The Inn has a fascinating history and many tales to tell. One of the oldest pubs in England, originally built in the 12th century, the cellars are the only parts that remain from the first building. What you see now was mostly built in the 15th and 16th centuries. In its current manifestation, it offers a lovely bar and restaurant and an absolutely unique inn experience. Each of the thirty-one rooms has a different theme. Enjoy rooms with four-poster beds, and low ceiling rafters, hidden passageways, and a sliding bookcase. A night in a piece of English history!

Smuggling was big business in the 18th century and the notorious Hawkhurst Gang hung out at the Mermaid Inn. This infamous gang operated for over 10 years, all along the channel coast, with almost complete impunity. Tunnels in the cellars of the Mermaid, are said to lead to other nearby inns, for quick escapes and hiding their booty.

Rye was a once Cinque Port, which meant it was one of the places that supplied ships for the crown and defended the coast from invasion from France. To better understand this medieval history a visit to the Ypres Tower, which contains the Rye Museum, is a must.

While exploring the ancient buildings of the town, for the energetic, climbing to the top of the tower of the 800-year-old St. Mary’s church provides great views over the town. On a clear day, you can see for miles down the channel coast.

If you have a literary bent, the Lamb House is a must-see. Owned by the National Trust since 1950 the house was built by a local wine merchant, James Lamb, in 1722. The story goes that four years later King George I took shelter here one night when his ship was stuck on the nearby sands. James’s wife had a baby that night who, of course, was named George. For some reason, the house has attracted great writers including Henry James, E.F. Benson, and more recently Joan Aikens. Benson’s novels about the town and the house, Mapp and Lucia, were filmed in 2014 by the BBC. The garden house and its walled garden is a lovely spot to enjoy a sunny day and a spot of tea. The house is open to the public in the summer and displays some of Henry James’s possessions.

The curios shopper can enjoy a few hours in the old town, poking around the antique shops, including a kitchen shop where your grandmother would recognize most of the wares on sale. On Wednesday mornings you can find a farmer’s market outside the Cinque Ports pub. If you develop a thirst for a good beer, Rye has its own microbrewery plus many olde worlde establishments. Every August you can find the Rye International Jazz and Blues festival rocking the town for five days. And keep your eyes open because Paul McCartney has had a home near Rye for many years.

7. Take a Stroll in Nature

If you want a little peace and quiet, wander around the Rye Harbour Conservation Area just south of the town. There are paths through the marshes that are home to hundreds of rare and endangered species.

8. Explore the Dunes in Camber Sands

For those who like the beach and the sea, continue on to Camber Sands. This is one of the few places in England you can find more than just a long beautiful sandy beach, but sand dunes, too. Along with many others, the movie The Longest Day portrayed it as the beaches of Normandy. It has even doubled as the Sahara Desert. A great place to spend an afternoon, sunning and exploring. There are also a couple of good restaurants and bars nearby to sit and enjoy the view.

9. Have an Adventure in Bodiam Castle

To finish any visit, if you still have time, not far from town is Bodiam Castle. The National Trust owns this 14th-century fortification. It is every child’s fairytale dream. The moated castle has a turret in each corner, a big portcullis entrance, spiral staircases, and battlements. In the summer they have knights in armor, jousts, and medieval fairs in the open fields beside the moat. Come and relive your childhood fantasies. Additionally, if you always wanted to ride a steam train, take a ride on the Kent and Sussex Light Railway. The Victorian train runs from Bodiam to Northiam. A great day out!

Rye is a great place to explore and relax. Only an hour from London you can easily enjoy a day or a weekend here, and the town is sure to leave happy memories for any visitor.

10 Offbeat Things to Do in London