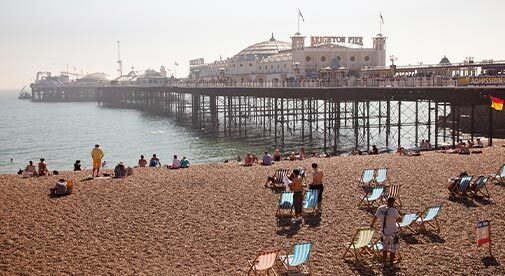 Brighton, often called “Little London,” is the biggest and possibly the oldest beach resort town in England. With the advent of the railway in Victorian times, it became popular as a day trip to the sea. Just 50 miles south of London, it has kept its unique style and still attracts millions of tourists every year. In its time it has attracted kings, aristocrats, rock stars, working-class families, ‘Mods and Rockers’, gangsters, and the internationally famous, too.  It has seen riots, bombings, and hosted films, and TV shows. The ‘bad boy’ of the last century has become the heart of the south coast. The city offers everything from great hotels to old-fashioned B&Bs complete with classic landladies.

In no particular order, here are the top 12 things to do in Brighton:

This used to be an area of farm plots 200 years ago. Now it is one of the most interesting areas in the town. There are over 300 stores, cafes, pubs, flea markets, and artisan workshops in the pedestrianized narrow lanes. You can spend hours wandering around here poking around in the unique shops, or just soaking up the atmosphere.

The Lanes are the original fishing village passageways. Get lost in these old alleys, some no wider than arm’s width, and discover clothing designers, antiques, handmade jewelry, curiosities, pubs, and great restaurants. A wonderful place to enjoy an afternoon shopping with a relaxing stop for a meal or drink.

The Royal Pavilion, a Brighton landmark, was built by the then Prince of Wales in the late 18th century for his mistress as a place to relax by the sea. In 1815, just before he became King George IV, he had it redesigned to reflect his passion for the orient. Come and see how a king enjoyed life over two hundred years ago.

The five miles of seafront is what has been bringing visitors here for over 200 years. It still attracts millions of tourists today. The raised promenade gives great views of the beach, the piers, and the attractions. Stroll along the beach and find odd little shops below the road. Enjoy a picnic on a blanket, paddle in the sea, or people watch.

Another ‘must see’ is the Palace Pier. This Grade II listed building, stretching over 0.3 miles into the English Channel, was opened in 1899. The most popular attraction in England, outside of London, it attracts over 4 million visitors every year. It remains an old-fashioned ‘day at the sea’ type of pier with a funfair, a theatre, and an assortment of attractions and eateries.

Opened in 1872, Brighton Sea Life is the oldest operating aquarium in the world. With over 3,500 sea creatures and attractions like a tunnel under the water and a glass-bottomed boat, this is a great way to see under the surface of the sea.

With over 11% of the population being part of the LGBTQ+ community, Brighton has been the gay capital of England for over 200 years. Most of the community is centered around Kempton, an area of Regency and Victorian buildings. Considered the ‘artsy’ area of town, the streets are busy with unique little shops, bars, pubs, and restaurants. The biggest Gay Pride event in the country happens every year in early August.

On the occasional rainy day, consider a visit to a couple of the city’s museums. The Brighton Museum and Art Gallery was originally meant to be King George’s tennis court at the Royal Pavilion. It now contains fascinating eclectic collections worth exploring. The Booth Museum of Natural History is a fantastic collection of the natural world.

The observation pod rises 524 feet on this tower over the city and seafront. On a clear day, with its 360-degree view, visitors can see far more than the beach, for almost 50 miles to the Isle of Wight to the east and Beachy Head to the west.  The attraction was opened in 2016 by the people who created the London Eye.

This narrow-gauge railway, built in 1883, is the oldest operating electric railway in the world. Running along the seafront for just under a mile from the pier east towards the marina, it offers a different way to see the beach and experience a piece of history.

If you are staying the night, a hearty English breakfast is the morning offering for most hotels and B&Bs. Lunch of pub grub includes classics like bangers and mash, or shepherd’s pie. You have come to the sea, so fish and chips at the beach are almost mandatory. The evening opens up an opportunity for everything from standard fare, to gastropubs, to romantic new cuisine.

Brighton has had a reputation for decades as the party capital of England. On any evening you will find hen and bachelor parties doing noisy pub crawls down the streets of the old town. Night clubs of all sorts entertain the crowds until the early morning. For the more refined there are musicals, dance, and theater events.

Try to time your visit for May and experience the annual Brighton Festival. The largest and oldest festival of its kind in England, it presents dance, music, art, theater, and family events at various venues around the city. For something completely different, the Brighton Fringe, which highlights performances by local talent, is run at the same time.

These are only a few of the attractions in Brighton enjoyed by millions of tourists every year. If it is for a day at the beach or a romantic getaway, Brighton is the place to be.