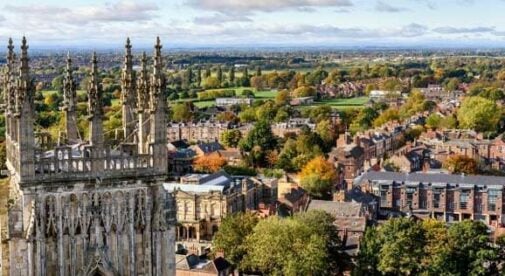 The city of York, in the north of England, is a gem that many visitors overlook simply because they do not know what it has to offer. It can take weeks to experience a sprawling metropolis like London—York, on the other hand, promises 2,000 years of British history and culture, all in a compact, easily accessible city. A two-and-a-half-hour train ride through England’s countryside of rolling hills, farms, and picture-perfect villages gets you to the capital of the north.

Here are just 10 highlights not to miss in York.

York has been a walled city ever since the Romans first settled here. When the Normans came in the 11th century, they rebuilt the walls to protect the city from the Vikings and marauding Scots. The Victorians kindly restored most of these structures to their former glory and created a 2.11-mile walkway around the city. The walls have four main gates known as “bars” (the Micklegate Bar was where they used to stick the heads of executed traitors on spikes). Despite its bloody past, York’s City Walls Trail offers a scenic route around the city and is a great way to see, and get a feel for, York’s long history.

The size and majesty of York’s cathedral—the largest medieval church in northern Europe—is overwhelming. After hundreds of years of being built, destroyed, and then rebuilt, the current structure of The Minster was consecrated in 1472. The massive stained-glass windows and vaulted ceilings will take your breath away, and you may even spot the soles of Christ’s feet in the ceiling of the nave. The energetic can climb the 275 steps to the top of the tower and view the city below. Make sure to visit the crypt, where you can see excavated stonework from the previous Norman cathedral.

Excavations in the 1970s in the Coppergate area of York turned up the 1,000-year-old Viking town of Yorvik—where York got its name. The river clay preserved thousands of Viking artefacts, everything from houses to pigpens. Instead of building a museum, the owners rebuilt the settlement itself underground. You can experience this village on small cars which pass through the exhibits, complete with simulations of the sights, sounds, and smells of life at the time. If you get the opportunity, visit the Viking festival in February.

The Shambles is an old market street characterized by 14th-century overhanging buildings. Originally a street lined with butcher shops and houses, the well-preserved timber buildings and unique stores (including magic stores, bookstores, gift stores, bakeries, and restaurants) now attract visitors from all over the world. This winding medieval street is a great place to spend some time exploring and soaking up the atmosphere. Do not miss the treasures down the Snickleways (an eclectic collection of winding passageways).

The largest train museum in the U.K. will dazzle more than just the trainspotters in your group. The National Railway Museum will take you back to a world of steam engines, as well as through centuries of travel history. Here you will find models such as the Mallard, the Duchess of Hamilton, the Rocket, as well as hundreds of other trains, coaches, and the stories that accompany them. In the summer of 2021, the Flying Scotsman will be on display at the museum.

This keep, on its raised mound, is all that is left of the castle William the Conqueror built in the 11th century. Besides being a castle, it has also served as a royal administration center, a prison, and law courts. After centuries of turmoil the tower still remains—though the moat is gone, the stairs are modern, and in spring the hill is covered with daffodils planted in commemoration of the lives lost here. Nowadays, Clifford’s Tower is owned by Heritage England and is open to the public most days. The views over the city and surrounding countryside are simply incredible, and add to the many reasons to visit this local treasure.

Set on the grounds of York Museum Gardens, which also contain an observatory and the ruins of an abbey, Yorkshire Museum and Art Gallery is a great place to explore on a rainy day. Here we can learn about the people, places, and items that have shaped Yorkshire’s history. From Alan the Dinosaur—the oldest sauropod in the U.K.—to the textiles and clothing exhibits, there is plenty to delight visitors. (The gold and jewelry display from the last 2,000 years is absolutely enthralling.) At the art gallery you can spend hours engrossed by thousands of paintings, ceramics, and glassware.

Rowntree’s, Terry’s, and Craven are all widely recognized brands that have been making chocolate and confectioneries in York for nearly 200 years. For those of you that love chocolate, this exhibition is mandatory. Learn, hands on, all about the manufacturing process and watch master craftsmen make individual chocolates. Did you know that Terry’s made a chocolate apple before they became famous for their chocolate orange? Find out how KitKat became the most consumed chocolate bar in the world. And, most importantly, enjoy the samples!

Go wild for a day at the races. Between May and October York Racecourse stages 17 race days, including the four-day Ebor Festival every August. The finest thoroughbreds from around Europe attract huge crowds and, with over a million pounds in prize money on offer, the stakes are high. This is where you get to wear big floppy hats, drink champagne, and soak up the atmosphere. The grounds also host music concerts and other events.

York is full of interesting places to explore—from strange shops to poke around in, to restaurants, lively pubs, and cafes. Some of the more interesting things to see and do are Betty’s Tea Rooms (100 years of afternoon tea), Roman Bath pub (2,000-year-old mosaics), Parliament Street on market day (Saturday), York Outdoor Market (great deals to be had), river walks along the Ouse (or the Foss), St. Mary’s Abbey ruins (for outdoor performances), Monk Bar Museum (Richard III experience), and local beer tasting (too many to try them all).

The best time to visit York is at Christmas time. Enjoy choir concerts in the Minster, mulled wine at Thor’s outdoor Viking Hall, and the Christmas market on Parliament Street—all to be explored under the city’s twinkling light displays.

These are just some of the interesting city sights that await the York visitor. From 5-star hotels to quaint B&Bs and self-catering in a medieval tower, the variety of accommodation on offer is too long to list. If you want to explore farther, there are great houses, castles, a maze, abbey ruins, rugged dales, and beautiful countryside to explore just outside the city.

Getting to York is easy.

Driving from London, take the A1(M) north and switch to the A64 near Tadcaster. Watch for highway signs marked “The North”. Getting from city center to city center takes about four and a half hours. Remember, you are driving on the left. You will get used to it quickly.

Trains from London are frequent (about every 30 minutes) and the pleasant journey takes only two hours.

The closest big airport is in Manchester. Driving from the airport to York takes only two hours. The train takes a bit longer.

Whether you spend a day or a week in York, it will turn out to be a memorable experience. Enjoy.

10 Offbeat Things to Do in London

9 Best Things To Do In Rye, England