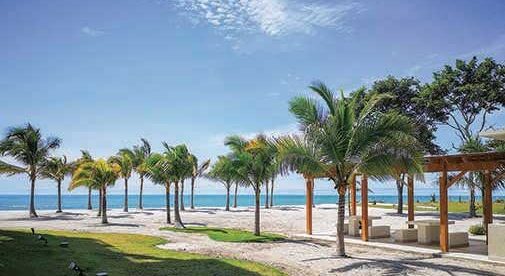 It starts with a glance of a tail fin, or maybe just a trick of the light playing against the undulating Pacific water.

Then, there’s no mistake. Like a volcanic eruption, the surface of the ocean explodes as the humpback breaches just feet from your boat. Fifty tons of pre-historic mass, twisting and turning as it flies nearly 30 feet into the air. There’s no artifice. This is a pure, natural encounter. Something few people on the planet ever get to experience.

The small town of Pedasí, three miles from the tip of Panama’s Azuero Peninsula, has long drawn folks for its rich marine life. Because the continental shelf drops so fast, so close to shore, you can see whales, dolphins, turtles, or you can fish for tuna from a small boat within sight of land.

It’s so good, in fact, that folks drive five hours from Panama City to visit. It’s hard to get to but they’ll tell you it’s worth the effort. What few folks know, is that everything you get in Pedasí you can easily find within just 90 minutes of Panama City.

You can see whales giving birth, hop onto tropical islands, explore mangrove forests, drop a line for tuna, mahi-mahi, and wahoo. Hike a mountain with incredible views of Panama City and the Panama Canal. And enjoy Pacific beaches with some of the best surfing in Panama.

But that’s what I’ve come to expect in Panama. It’s a country that hasn’t fully recognized just how special its natural environment is. Its best spots are almost a secret, and even the folks who live here don’t know the wonders on their doorstep.

Panama has amazing cloud forests, miles of pristine beaches, hundreds of secret islands, exotic tribal craftspeople, and mountains so high that the slopes offer temperate climates ideal for vegetables and strawberries. It’s a bird watching paradise, a place to go horseback riding in the jungle, or surfing in the Pacific. And on top of all that, it has a glittering world-class city at its heart. All just a few hours flight from the U.S.

Problem is, most people don’t think of Panama as a natural paradise. Consider how it compares to Costa Rica. There’s a lot of similarity: Lush rainforest, majestic mountains, Pacific and Caribbean beaches, many of the same animals, and the same climate. However, in 2019, before the pandemic hit, Panama recorded only 1.75 million international tourists compared to Costa Rica’s 3.14 million.

Why the big difference? The main reason is simply that Panama prioritized businesses and retirees over tourists. They have done many smart things to attract both. Like offering numerous tax advantages for international businesses and creating the Pensionado visa, which offers big discounts for retirees on local services. When a colleague of mine moved to Panama in the early 2000s she said the tourism minister at the time openly bragged that he didn’t want tourists!

And so, to this day, most people still don’t consider Panama as a vacation destination. But that’s all about to change.

The Tourism Authority of Panama just launched their Sustainable Tourism Masterplan 2020-2025, a $302 million plan to reinvent Panama as a top tourist destination for the post-pandemic travel boom. That’s on top of infrastructure upgrades and tax incentives to jumpstart the sector.

Billions of dollars are being spent on new roads, wider roads, more roads, bigger roads; a new bridge over the Panama Canal; new metro lines, and on top of all this is a massive expansion of Tocumen International Airport close to Panama City.

Just west of Panama City you’ll find the Pacific Riviera, a 50-mile or so stretch of coastline that’s benefiting significantly from Panama’s infrastructure upgrades. The smart money has poured into the Pacific Riviera over the last 15 years. New hotels, new resorts, a premium golf course and swish new residential communities have popped up. A slew of upper-middle-class housing back from the beach has brought schools, supermarkets, and services in its wake.

Vacationers, snowbirds, and weekenders are all coming in droves to this coast. It’s long been popular as a beach escape for well-heeled city dwellers. And it’s now a place where folks want to live full-time. The Path of Progress is making that easier to do than ever before.

Yet there’s an anomaly: As beaches and towns farther from Panama City boomed, Chame, a stretch of pristine white sand beach closer to the city, went overlooked.

Chame is the nicest, closest beach area to Panama City. It should have been the natural starting point for development on the Pacific Riviera but it was leapfrogged and left a virgin paradise.

In 2007, a trusted contact drove me out to Chame to show me one of the prettiest beaches not just in the region but in all of Panama. At the time, not many people even knew it existed. Wealthy city folks heading to the beach for a weekend escape drove right past this spot to beach hotels and communities that were farther from the city, but easier to get to.

When we got to the beach, I knew right away that I had found something spectacular. Ahead of us, a white-sand beach opened up to the Pacific Ocean sparkling like a jewel in the sun.

But it’s no big mystery why this beautiful location stayed off the radar. What passed for a road down Punta Chame peninsula was a car-killing bone-shaker. Plus, most of the land was owned by just a few families that didn’t want to sell. And much of the land was zoned farmland.

Yet, it screamed potential. And I knew that with the right developer, it could be one of the hottest destinations in Panama.

This was the secret spot where I discovered you could take a boat out and see whales giving birth. The ocean currents close to shore are used by whales as a highway. These are the very same currents that take whales to Pedasí, but you can reach here from the city in just an hour or so.

The surfing here is world class too. A local contact told me it has the most consistent waves in the whole Bay of Panama. And you can go canyoning, swim in a mountain river, and explore ancient petroglyphs.

The islands offshore have fascinating stories too. You can explore them easily on day trips. One was owned by John Wayne and has an abandoned Western World theme park on it. Another is home to two gaily painted fishing villages and you can hike the island’s trails and watch for birds.

You can scuba dive if that’s your thing, check out caimans in the mangroves, or visit any of 18 waterfalls in the area.

In 2015, on another scouting trip, I went back for another look. Whispers were spreading that something big was set to happen in this locale. I knew I needed to see for myself. 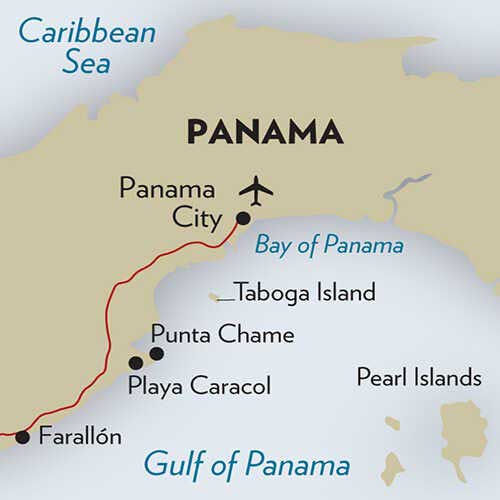 What I found blew me away. One of Panama’s foremost developers had started work on a beach community called Playa Caracol. He had got a paved road put in, all the way to the project, and was spending serious money on infrastructure.

This was one of the few developers who could bring this project to fruition. A guy with a history of delivering unparalleled communities in Panama—including a set of man-made islands right in the heart of Panama City.

Today, the community has more than 300 units complete, with a thriving surf club, and plans for a beach club, events center, sports facilities, and a “mini downtown” with boutique stores, markets, restaurants, bars.

The developer was inspired by the best of Huntington Beach in California. Huntington Beach is one of the surf capitals of the world. Vacationers pile into plush resorts and Airbnb rentals. They come for the 10 uninterrupted miles of wide, sandy beach. (There are 30 miles or more at Playa Caracol.) And for everything else this Southern Californian beach town offers.

Once a patch of sleepy farmland, just like Playa Caracol, Huntington Beach has evolved into a hopping tourist destination.

Every imaginable kind of event takes place here…from the annual U.S. Open of Surfing to car shows, aerial displays, marathons, kite festivals…you can watch movies outdoors under the stars—just as the developer plans for Playa Caracol.

Both destinations have consistent and amazing surfing. In Caracol the winds and waves are just right, especially for kite surfing. Already people come from all over the world to surf around Caracol, and as word gets out, demand will explode. (It’s also an amazing swimming beach.)

But there’s one huge difference between Californian towns like Huntington and Playa Caracol. And that’s price.

You’d be extremely lucky to get a condo in Huntington Beach for $350,000. But in Caracol, members of my Real Estate Trend Alert group have got in at much less than ground-floor pricing in this brand-new beach destination.

Better still, because Panama is on a major push to develop its tourism sector, it has created what I call “The Great Bailout,” a tax incentive to encourage ambitious projects like Playa Caracol. And I figured out how to get a piece of it for RETA members, who can own on the stunning Pacific Riviera, where a massive Path of Progress has been rolling along, at a price that’s unheard of for a beach community like this.

Thanks to this wave of development and “the Great Bailout” RETA members have had the opportunity to own furnished luxury two-bedroom condos close to the beach in Playa Caracol from just $137,000. And a chance to own not one but two fully furnished and self-contained luxury hotel suites, on the sand, from just $219,000.

Now, this part of the Pacific Riviera is set to take off. The Panamanian government is spending money on an advertising campaign in the U.S. and Canada to sell Panama as a tourist destination. And it’s creating the infrastructure to back it up.

With ease of access, close proximity to Panama City, and with everything that makes this region so special, Chame and Playa Caracol will flourish.

Panama Real Estate: Get More Bang for Your Buck

The Real Estate Market in Boquete is Now a Buyers’ Market