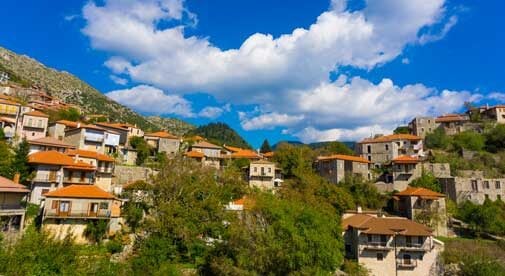 The phrase “Greek village” often conjures up images of adorable donkeys, olive tree orchards, fields of ripening produce, elderly town locals, and quaint shops with handcrafted items. The reality is often different, and many modern Greek villages can be a bit dumpy and bland. Void of donkeys, instead they feature chain stores and unattractive homes clustered around single roads or small squares with a nondescript, rather depressing vibe. But don’t give up on Greek villages entirely, because there are a few that do align with the picture in your mind and a handful that are probably even more charming than you imagined.

Here are three of my favorite Greek villages you do want to visit:

About 122 miles from Athens lies Stemnitsa, a Peloponnese mountain village in the region of Arcadia surrounded by pristine fir forests and featuring historic churches, impressive mansions, a lively main street, and lots of tavernas, restaurants, bars, and cafes.

The name Stemnitsa has Slavic roots meaning “woodland,” and the village is situated 3,445 feet above sea level on the Mainalo mountain, the tallest mountain in the Menalon highlands. According to Greek mythology, this mountain was a favorite of Pan, the Greek god of nature, the wild, shepherds, and flocks.

With a population of under 400 people, the village is renowned for its handcrafted jewelry, and Stemnitsa is home to the School of Silversmithery and Goldsmithery. Throughout the main street, you’ll find shops selling silver and gold crosses, rings, and other handcrafted items, and while the village is tiny, this fine jewelry emphasis gives it an elegant flair.

The village offers visitors the Folklore Museum of Stemnitsa which highlights fine art from 1700 to 1900 and includes exhibitions featuring the traditional ways of life including candlemaking and a jeweler’s workshop.

If you are a hiker, Stemnitsa is for you as it serves as the starting point for the Menalon Trail, a 47-mile trail divided into eight sections of varying difficulty. The 7.5-mile Stemnitsa-Dimitsana section is popular as a day hike and offers a beautiful descent into the Lousios Gorge past the Prodromos Monastery, followed by an ascent to the Old and New Filosofou Monasteries.

Despite the small population, the village is well set up for tourism, and you’ll have no shortage of tavernas, cafes, and restaurants to dine at. Stemnitsa is a village you can visit year-round, and the winter months are particularly beautiful as, due to its elevation, the area can become a winter wonderland covered in snow.

If seaside charm is what you seek, Kardaimili in the Mani region of the Peloponnese about 169 miles from Athens, offers you beautiful beaches, a medieval castle, an impressive church, and a lively main street. One of the oldest settlements in the Peloponnese, Kardamili is mentioned as far back as around 1200 BC in the Iliad, the epic poem by ancient Greek writer Homer. In the Iliad, Kardamili was offered to Achilles by Agamemnon to tempt him back to the siege of Troy.

The village is divided into two parts: the historic Old Town/Upper Village with its Venetian style buildings and ruins and the main street area below with colorful shops and restaurants. Be sure to bring your walking shoes because there are lots to see and do as you explore the Old Town. This area features the tower houses built by the Niklian clans, the tombs of the twin gods Castor and Pollux, and the Byzantine church of Saint Spiridon, and a tiny museum.

The lower part of Kardamili offers you rustic charm with stores featuring local ceramics and textiles alongside food stands, restaurants, and cafes. After your exploration, you can cool off at Ritsa Beach and take in the sunset. As a seaside village, Kardimili is especially nice to visit from the May to October months when you can take advantage of the many unspoiled beaches in the surrounding area.

If you head north about 222 miles from Athens you’ll find Milies, a picturesque mountain village near Volos. With its location about 1,312 feet above sea level on Mount Dikri, Milies is famous for its impressive views of the Pagasetic Gulf and for being the final destination of the famous Pelion Railway, a rustic train route that runs from Ano Lekhonia Railway Station outside of Volos to Milies.

If you are seeking a low-risk adventure, try the Pelion Railway to reach Milies. The tiny four-car train covers nine miles in about 90 minutes.  Since the train never goes faster than 12.4 miles per hour, it is easy to take in all the lush natural beauty of the route.

In Greek mythology, Milies is home to the cave where the Centaur Chiron and his students lived. The name Millies means “apple trees” in Greek, and the village is known for the production of apples. Across the town, the buildings are set in an amphitheater-style with restaurants and shops arching along the mountain to give the visitors maximum access to the beautiful views. Sunsets in Millies are magical.

In addition to the views, the village offers the Public Library of Milies containing over three thousand rare books, a community folklore museum, and the church of Agioi Taxiarches. The church is significant because at this church on May 17, 1921, the scholar Anthimos Gazis raised the Greek flag of Revolution. The flag is housed today at the Library of Milies. For those interested, the church also features a Zodiac Cycle at the entrance.

While none of these villages feature donkeys, which are rare these days and mainly a thing of the past, they do give the visitor that sense of Greek charm we all imagine when we hear “village.” And while these are my three favorites, don’t think these are the only three. Even if the average Greek village doesn’t necessarily impress, with a bit of research and local knowledge, you can experience the full Greek village charm in many parts of the country.