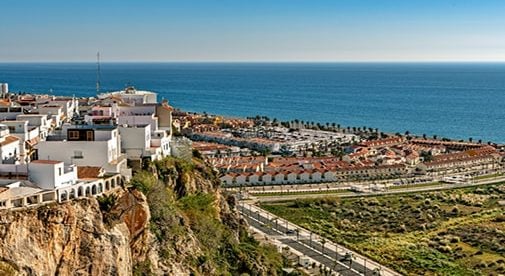 Like sugar sprinkles on a chocolate-covered churro, the white-washed buildings of Salobreña rise above the Tropical Coast (Costa Tropical) of Spain. At first glance, the buildings seem to be a tribute to the region’s history of sugar production. However, their white façades are actually designed to keep them cool in the region’s sub-tropical microclimate.

Located about an hour’s drive east of the international airport in Málaga, the hilltop town of Salobreña is considerably quieter than its neighbors on the Sunshine Coast (Costa del Sol). While its beaches do attract sun-seeking tourists, the Tropical Coast has historically been dedicated to agricultural production.

With its unique sub-tropical microclimate, the region around Salobreña is ideal for growing foods that are not commonly produced in Europe, including custard apples, bananas, mangos, and sugarcane. Sugarcane has had a history in the region for almost 1,000 years, resulting in a number of different value-added products including rum, molasses, and white and brown sugar.

The last sugarcane refinery in the region closed in 2006. However, at one point sugar production was so important that the refinery actually created its own bank and issued its own currency.

Shielded by Spain’s Sierra Nevada mountain range, the Costa Tropical receives very little rainfall. However, the snowmelt runoff from the mountains provides an abundance of fresh water for agriculture. The Guadalfeo River originates in the Sierra Nevadas and empties into the Mediterranean near Salobreña. As a result, the river has created a fertile delta around the town.

A lack of rainfall also contributes to Salobreña’s glorious amounts of sunshine. The region receives around 2,900 hours of sunshine every year, helping to produce bountiful harvests.

Perched atop a craggy hill, Salobreña’s defensive value has been attractive for thousands of years. The town’s rocky headland overlooks the vital shipping routes leading to the Strait of Gibraltar. There is evidence of a Bronze Age settlement dating back 3,500 years.

Ancient seafaring civilizations including the Phoenicians, Greeks, and Carthaginians made landfall on the Salobreña promontory. However, it was the Romans that made significant infrastructure investments in the area, including roads, irrigation, and buildings. The ruins of a Roman aqueduct and a bathhouse can be found in the nearby town of Almuñécar.

Today, Salobreña’s crowning structure is a 10th-century castle constructed by the Moors. This Nasrid-era structure is built atop a Phoenician fortress dating back over 2,800 years. Washington Irving, an American writer known for his work, Tales of the Alhambra, based one of his stories here.

Salobreña’s location on the southern coast of Spain makes it ideal for exploring the region. The incredible city of Granada with its Moorish architecture, delightful people, and free tapas is about 45 minutes away by car.

Salobreña is bordered by the world’s largest olive-producing region and has a significant number of almond orchards nearby. The shade of these trees offer an ideal picnic area during the intense summer heat.

In the nearby city of Motril, you can catch a ferry to the coast of North Africa. Explore the autonomous Spanish enclave of Melilla, which has belonged to Spain since the late 1400s. Surrounded by Morocco, this fortified city has a long and fascinating history.

Málaga, the regional hub for transportation, shopping, and medical services, is about 1.5 hours away. Founded by the Phoenicians, Málaga is one of the oldest continuously inhabited cities in Europe. Its abundant sunshine and historical sites make it a natural tourism destination.

Sugarcane’s demise as the largest economic driver of the region has led to a population exodus from Salobreña. As a result, there are a large number of “For Sale” signs in this town of 12,000 people. While many houses are in need of renovation, there could be a few sweet opportunities for those looking to make their home in Salobreña.