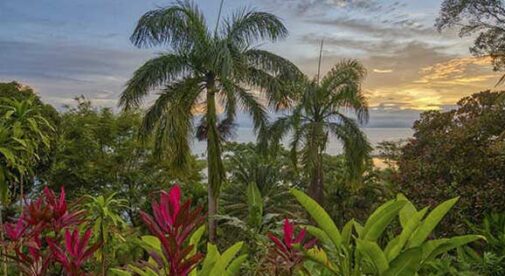 Ecotourism is the current buzzword in most travel literature, yet many people don’t understand what’s involved. Just visiting places of natural beauty, having some tropical drinks, and getting wildlife pictures to wow your friends back home used to seem like enough. But, as we begin to come to grips with the realities of how we are destroying the very places we cherish and dream of visiting, a more mature and responsible view is shaping up. These new, sustainable trips are just as fun and relaxing as ever—but now we can travel with the knowledge that we are helping to contribute to the preservation of the places we visit and the future of the local Indigenous cultures, whose presence always contributes greatly to the special appeal of their environment.

Simply put, it’s visiting places in nature in a way that will sustain their unique and attractive qualities. Ecotourism allows visitors to be educated about a habitat and its inhabitants; promoting conservation while still offering the traveler the chance to explore nature in a non-invasive and sustainable manner. “Sustainable” is a word that gets overused. It just means exploring in a way that will leave the area the same for future generations.

What is an Example of Ecotourism?

Of course, things like not littering on the hiking trails come to mind first, but a deeper dive shows us how we can be involved from the very start of our trip. We can consider how environmentally friendly our trip will be by asking questions such as: Will we rent bicycles instead of vans? Will we hike instead of drive?

Next, we can research our tour companies. Are they involved in preserving and protecting the areas they serve, or are they just barreling a bunch of tourists through the landscape for quick profits? Is the area already overcrowded with tourists, causing the local people to feel overwhelmed and resentful? Is the tour company based in the country, or is it a multi-national company which will be taking its profits out of the country instead of reinvesting in the local economy? Is the tour company operated by educated people who understand and can explain things like biodiversity and its importance?

When deciding to visit Indigenous people, find out if they are being exploited by tourism or if they are employed by the tourist companies, which can help empower them to fight poverty in a way that will sustain their culture and communities. Helping Indigenous people become better educated about their own environment not only lets them better educate us when we visit, enriching our experience, but allows them to take more steps to preserve their heritage. Employing them in sustainable tourism reduces dependency on other trades, like poaching endangered species or gold mining in fragile environments.

You can also make sure your hotel is involved in sustaining the area by looking for one with high environmental standards. Two excellent resources for information about this are The Global Sustainable Tourism Council and the Rainforest Alliance.

One of the best ways to enjoy and learn about an area is to simply try to live like a local. Stay with a local family if possible, eat local cuisine instead of demanding your usual fare, and buy local art and edible products instead of junky souvenirs as presents for the folks back home. Bring reusable containers like cloth shopping bags and travel mugs. Avoid bottled water and its plastic waste by using a LifeStraw when the water supply is iffy. Beware also of “greenwashing,” the unscrupulous practice of advertising activities and destinations as eco-friendly and sustainable when just the opposite is occurring.

After living in Costa Rica for the past seven years, I have very high regard for the efforts here to maintain the beauty of the country, preserve the wildlife, and protect the rich heritage of the Indigenous people while helping to ensure that they, too, can enjoy the financial benefits of tourism. A stunning example of this is the turtle project at the Ostional Wildlife Reserve on the Nicoya Peninsula. Every year, thousands of olive ridley turtles and their close cousins, Kemp’s sea turtles, arrive on the black-sand beaches to lay their eggs. The largest arribada or “turtle arrival” was November 1995, when an estimated 500,000 turtles came ashore! At some point, scientists realized that the eggs laid the first three days of the arribada were being destroyed by the subsequent arrival of more turtles, who were digging them up as they excavated holes to lay their own eggs. The decision was made to allow the locals to harvest and sell the eggs, which are considered a great delicacy, during those first three days. In return, the locals agreed to organize councils to protect the turtles, patrol the beach for poachers, and keep it clean. When we visited there last year, our guide proudly pointed to the new school and other public buildings on the street behind the beach and told us, “All paid for with turtle egg money!”

Jack Ewing came to Costa Rica in 1970 with an eye to utilize his Colorado-bred cattle ranching skills in a new arena. His growing fascination with the Costa Rican rainforest soon took him in an entirely new direction and he became an environmentalist and a naturalist. After reading Ishmael, the philosophical novel by Daniel Quinn which explores the ethics of sustainability and the possibility of global catastrophe, he decided to turn his beachside cattle ranch back into rainforest. Soon the monkeys, parrots, sloths, and others all returned to their old haunts. Jack converted his ranch into Hacienda Barú, which includes the Barú National Wildlife Refuge and his ecolodge. His book, Monkeys Are Made of Chocolate, even rated an introduction by Daniel Quinn, after Quinn became aware of the work Jack was doing to preserve his little corner of Costa Rica. Today, skilled guides will take you on the hiking trails available throughout the park or you can take an amazing zip line tour down the mountain adjacent to the park. Hacienda Barú is central to the Southern Zone and a great spot to base other adventures.

The Boruca are an Indigenous tribe living in the lower part of Costa Rica’s Southern Zone, about 12 miles from Panama. The Boruca are a pre-Columbian tribe, one of the few to survive the invasion of the Spanish in the 1500s. Facing extinction from extreme poverty, the Borucan culture was rescued in 1970 by a group of Costa Rican women, who helped them reclaim their original Borucan crafts and traditions. The women founded an association named La Flor de Boruca (the flower of the Boruca) to help perpetuate the vanishing culture. The strikingly beautiful ceremonial masks of the Boruca can be purchased in many parts of the country, but the best are those crafted in the village. Today, you can either experience the village for a day or choose to either stay there in rustic cabins, traditional open rancho arrangements, or even with a Borucan family. The village has running water and electricity.  The festival Balle de los Diablos takes place every year from December 30 through January 2. Beautifully staged dance ceremonies depict the battle they fought to drive off the Spanish and features the famous brilliantly colorful masks.

Corcovado is the ecological gem of Costa Rica. It encompasses the only remaining old-growth wet forests on the Pacific coast of Central America, and 13 ecosystems including lowland rainforest, highland cloud forest, jolillo palm forest, and mangrove swamps, as well as coastal marine and beach habitats. You can often spot many shy and endangered species here, such as Baird’s tapirs, jaguars, scarlet macaws, harpy eagles, red-backed squirrel monkeys, and white-lipped peccaries. More than 400 species of birds including 16 different hummingbirds inhabit Corcovado. It’s wet, remote, and rugged, but the trails are mostly good, and the camping areas near the ranger stations are grassy and well drained.

True intrepid backpackers looking for a longer stay have a few other options to explore, but for the less adventuresome it’s recommended to get to the small river village of Sierpe; arrange to catch a boat to Drake Bay; spend a delightful evening there with a great meal and an unforgettable sunset; make arrangements with your hotel for a guided group trip the next morning (you can’t enter the park without a guide. This is both for the park’s benefit and also yours…); and get up before sunrise to take the thrilling half-hour boat ride to the beach entrance to Corcovado. Your feet WILL get wet clambering over the back of the boat into the surf, so plan wisely. Three hours in soggy hiking boots is no fun. You’ll spend the next three hours having an unspoiled Garden of Eden experience. At the end of the hike, you’ll have a small cold lunch buffet on the beach and then another boat ride back to Drake Bay.

Enjoying the afternoon sun and surf decorating the palm-covered shoreline is the perfect time to recall the memories you’ve just made, the ones you’ll remember for a lifetime.  You can probably catch a boat back to Sierpe, but you’d miss another magical night in Drake Bay…

Costa Rica is a very special piece of tropical real estate, run by a very forward-thinking government that appreciates the magical qualities of their homeland. They realize what a treasure they have, and they love it dearly while also realizing the money to be made by accommodating those who want to come here and enjoy it. They are also quite aware that the quickest way to ruin somewhere rare and priceless is to let it become overrun with the cheap, touristy attractions that have spoiled many once-pristine locales. So far, they’ve held off the flocks of tourists, but the last few years have taken the same toll on Costa Rica as on the rest of the world, and they could use the same economic boost. We can only hope they are able to maintain the country’s natural beauty and pristine locations for those still longing to come and enjoy the magic of Costa Rica. There are so few places like this left in the world.