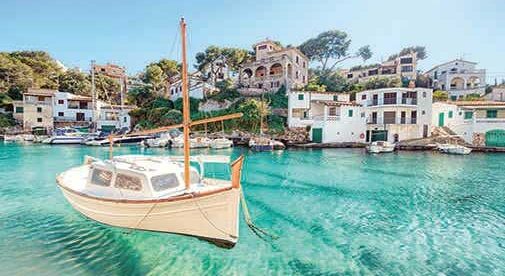 Azure waters lapping the shore, palm trees swaying in a breeze, your toes in the warmth of a sandy beach. Nothing beats island life. Pair that with picturesque medieval towns, some of the best cuisine in the world, and surprising affordability, and you have a recipe for a dream overseas home.

There are plenty of islands in Europe where you get warm weather for much of the year, attractive coastlines, and a range of amenities like water sports, seaside restaurants, and other fun in the sun.

You can head to charming seaside villages where life remains much as it has for centuries…or full-service resorts packed with vacationers. Islands used to be isolated. But in these days of fast and affordable travel (many islands have international airports with an impressive array of destinations) and high-speed internet, you can enjoy the best of island life while staying connected to the rest of the world.

Plus, you have all the modern conveniences to make for comfortable long-term living.

Like many Mediterranean islands, Cyprus has become a favorite haunt of northern European vacationers. Its shores are dotted with busy resort towns packed with sunburned tourists. Perfectly fine for some. But if you seek peace and quiet, you might try the seaside village of Esentepe on the northern coast of the island.

You can hike among olive groves in the surrounding foothills of the Kyrenia mountain ranges, and maybe even stumble across the ruins of a long-abandoned monastery. On the beach, it’s common to see turtles come ashore to lay eggs—an indication of just how laidback this stretch of coast is. At the same beach, the outgoing tide leaves behind rock pools filled with seawater—natural hot tubs when they’re warmed by the sun.

The Byzantine-era village is surrounded by modern development on the outskirts, which is where most second-home owners live. Here you can find a fully furnished, two-bedroom home—part of a duplex—with a community pool and lush garden area. You can walk to the beach. All at an affordable $117,356.

A crossroads of the Mediterranean for thousands of years, Sicily is the largest island and one of the most densely populated in this sea. It retains a distinct character from mainland Italy that expresses itself in its culture and cuisine.

Just east of Palermo, Sicily’s capital, Termini Imerese, has been famed since Roman times for its natural volcanic hot mineral springs and thermal waters. They’re said to cure respiratory, dermatological, and other ailments.

This renovated villa is actually made up of an upstairs and downstairs unit, which means you could live in both or live in one and rent out the other. Each has two bedrooms and is totally self-contained. The hillside location offers cooling breezes and views over the surrounding countryside and distant Mediterranean from the home and expansive terrace.

Mallorca, the largest of the five inhabited Balearic Islands at 637 square miles, is a hugely popular vacation destination among Europeans, thanks to abundant beautiful beaches, active nightlife, and other benefits. In fact, the Palma de Mallorca international airport is one of the busiest in Spain, with nearly 30 million passengers each year.

But this autonomous Spanish region just off the coast in the Mediterranean, where Catalan, along with Spanish, is an official language, has also played a major role in European history. Multiple kingdoms and empires have fought over it, as evidenced by plentiful Roman ruins, hilltop castles in the mountainous countryside, and Arab structures built before the Reconquest.

In the town of Muro, on the north coast, is a renovated three-story, four-bedroom village home just seven minutes’ drive to the quiet beach. Courtyards, terraces, and balconies let you enjoy the warm weather. A third-floor library/living room could be converted into another large bedroom.

The 15 Best Islands in the World to Retire On