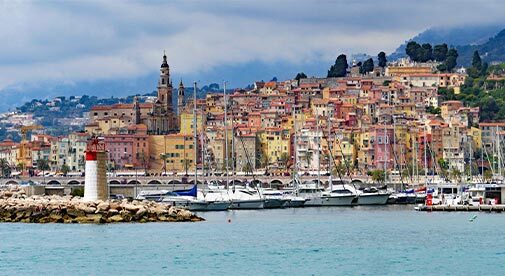 They also make dragons, lions, giraffes, buildings…all to celebrate the town’s most popular export. Menton’s annual Lemon Festival runs each February and requires about 150 tonnes of lemons to complete its art installations.

The irony being that a large portion of the citrus fruit is imported from Spain.

My senior researcher, Margaret Summerfield, was recently in town for a different reason…

She’s on the hunt for a European base and she’s making her way through the best of the French Riviera.

Menton is right on the edge of the Côte d’Azur with strong Italian influences. It doesn’t have the glamor of Cannes or the party atmosphere of Saint-Tropez, but it has lots of low-key, Old World charm.

Read what Margaret found below…

Exploring the Jewel in the Crown of the French Riviera

This morning, I walked to Italy.

Well, almost. As I write, I’m still in France. I’m in the little town of Menton, the last stop on the French Riviera before Italy. I can walk from my rented apartment in the center of Menton to the border post in only 15 minutes.

With lockdown restrictions, I can’t cross the border. But there’s a flavor of Italy in Menton. You’ll hear Italian spoken on the street, and see lots of Italian restaurants, cafes, and delis.

Menton is not as famous as Cannes or Antibes (which you can read about in my recent article here). But it’s the prettiest of my three stops on the Côte d’Azur. It’s known as the Pearl of France. The town center is a cluster of old buildings, painted in shades of yellow, orange, and pink. Narrow passages, alleys and steep stairways wind around the buildings and up into the hills. Stop for a break and you’ll catch glimpses of the bright-blue Mediterranean Sea.

This is a shot from my morning walk:

At one point, Menton was the border between Provence and Genoa. In 1346, it was claimed by Charles Grimaldi, lord of Monaco.

The town’s mild climate makes it ideal for growing citrus fruits. (It’s reportedly the only place in France where you can grow lemons outdoors.) Menton hosts an annual Fête du Citron, mixing carnival-style floats with a citrus theme. You’ll see giant dragon figurines, trains, and elephants, all covered in oranges and lemons. (You can see a clip of the 2020 festival on YouTube here.)

In 1848, after Monaco imposed a tax on the export of lemons, Menton seceded from Monaco. After a period under the King of Sardinia it finally became part of France in 1860.

In the 1860s, the town also became a fashionable tourist resort. An English doctor, James Henry Bennet, came to Menton in 1859. Suffering from tuberculosis, he was looking to “die in a quiet corner.” But his health improved. He tried Italy in 1860 but didn’t fare so well. He returned to Menton and started a medical practice. He published a book in 1861 called Winter and Spring on the Shores of the Mediterranean. This promoted not just the dry, warm climate of Menton, but also its charms, its food, and its beautiful setting. Others followed suit. Between 1860 and 1900, 67 doctors wrote 50 publications about Menton.

It’s said that the town had three hotels in 1861. By 1875, it boasted 30. It attracted royalty, the super-rich, writers, and artists. They built lavish villas or stayed in “palace hotels,” massive, magnificent structures that you can still see today. (I’ll write about these in a future mailing.) Bennet’s patients included Queen Victoria and Treasure Island author, Robert Louis Stevenson.

They’re not the only famous names connected with Menton.

Menton today is known for its citrus fruits and the annual citrus festival. But there are other good reasons to visit.

There are several botanical gardens, such as the Fontana Rosa, planted by best-selling Spanish novelist Blasco Ibáñez. The Val Rahmeh garden features small trees, originally from Easter Island, but now extinct there.

There’s a Jean Cocteau museum, with almost 1,000 of his graphic works. (It’s been closed because of flood damage since late 2018, unfortunately.) Cocteau also decorated the Marriage Hall in the town hall, a popular spot for weddings (you can see his frescos here). And in the Bastion Museum, inside a seashore fort, Cocteau decorated alcoves and the reception hall and created mosaics on the outside walls.

There are many historic buildings around town, with frescos, painted ceramic motifs, gilding. There are beaches, some sandy, some pebbled. The promenade runs for several miles along the seashore. There are nice parks and plazas for relaxing and people watching.

The hills and mountains behind the town are great for walking and hiking. Paragliders head to a point in the neighboring town of Roquebrune-Cap-Martin, taking off from Mount Gros to enjoy bird’s eye views of the Alps, Monaco, and the Mediterranean. While out walking on Sunday afternoon I watched a paraglider descend, until he was barely above my head, to land on the beach next to the promenade. The marina will keep most boaters happy and a watersports center offers canoeing, windsurfing, jet skiing, and diving.

The town has a casino, dozens of cafes and restaurants, bakeries and ice cream parlors. You won’t run short of places to eat. Foodies come for a 3-star Michelin restaurant, Mirazur, also ranked as #1 in the Restaurant Top 50 in 2019. The chef is inspired by nature and cosmic influences to create spectacular dishes (although the prices are equally spectacular!) There’s a covered traditional food market, too, in a historic building just off the seafront.

Menton isn’t the top destination for foreign tourists and expats on the French Riviera. It is however popular with French tourists. It’s also a hit with French retirees who come here to enjoy the climate, the serenity and the quality of life that Menton offers.

Like the rest of the Riviera, real estate is not cheap in Menton.

For €213,000 you could get a small one-bedroom apartment, close to shopping, the beach, and all amenities.

And from there prices go all the way to €1.69 million for an apartment in one of the original “palace hotels” that Menton is famous for…

Next, I’ll be taking a closer look at what’s currently on the market, so stay tuned…

Cheryl says: Hi Ronan, Missed out again! Our loss! Playa del Carmen was the one we had been waiting for since Cabo fell through. We’ll continue to look for your future reports. Congrats to those who were faster on the phone than us.

Thanks for all the opportunities.

Ronan says: Hi Cheryl. There was very strong demand for this deal. Sorry you missed out. But I’d still suggest getting your name on the waitlist. You’d never know what might become available.

Pamela: Hi Ronan, if a non-citizen of Mexico buys property within 50 km of the coast or 100 km of the border it has to be done through a bank trust (fideicomiso) and a fee is charged each year to the bank holding the trust. Does this apply to condos as well as free-standing property? I am asking as I am interested in buying property in the Progreso area.

Ronan says: Hi Pamela. Fideicomiso applies to all property (lots, land, houses, condos) being purchased by foreign buyers within 50 km of the coast in Mexico or 100 km of international borders. So, yes, it would apply to condos in Progreso.

I suggest you watch your RETA Alerts closely at the end of the week. I’m about to drop details of an upcoming opportunity in Progreso. I’m very excited about it, as it promises to be a landmark project from the same developer behind our recent deals in Playa del Carmen. Because of our track record with them, we can once again get a deep RETA-only discount. 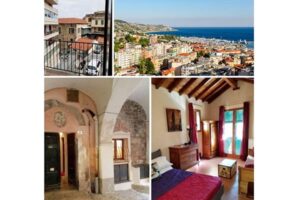 This newly renovated one-bedroom apartment is just an hour from Menton, across the France-Italy border, in the town of Sanremo. Accessed through narrow cobbled streets and stone archways, the apartment is well located to explore the medieval town, as well as some of the most beautiful sandy beaches on the Italian Rivieria, nice shops, cafes and restaurants, and the Ariston Theater, where a music festival is held every February. The apartment is restored with original features including a large kitchen, lounge, bathroom, large bedroom with vaulted wooden ceiling, and a living area opening onto a rear balcony.

Remember, we don’t make money from any listing shared here in the Your Daily Dream Home section. We have no dog in the fight. We’re just sharing cool properties we’ve found.

Another Win in Playa!

Homes for Foodies from $91K