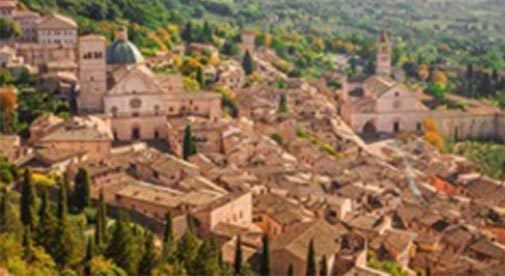 “My ex-husband told me that my heart was in Italy, and he was right,” says Cecilia Snyder, a former resident of Washington, D.C. and now a five-year resident of Assisi, the gem of Umbria and Italy.

Cecilia went to Italy for business for the first time in 2000. “I was blown away. I immediately fell in love with it. When I got back to Washington, I was walking on clouds. Returning from my third visit, I noticed that there was no joie de vivre. After colorful and expressive Italy, the people on the streets of Washington seemed grey, slumped over, unhappy,” Cecilia says. “Italy had captured my heart.”

Working in strategic communications for non-profits became increasingly discouraging. In 2010, when she was faced with another job change due to her non-profit employer going under, Cecilia’s first thought was, “I could move.” “But,” she says, “I was afraid. I didn’t have the things that people are supposed to have to move abroad. Non-profits do not pay well enough to have the savings that your investment advisor would tell you to have, for instance.”

However, 2014 became a pivotal year for Cecelia. After her job ended, she decided to take a three-month hiatus and went to Italy. She visited Assisi for the first time, and the thought entered her mind, “I could live here.”

Cecilia returned to the U.S. in July and decided to move to Italy, with no plan other than just that: to move. Though no one believed she would do it, she wrapped up her life in D.C. and on December 26, with friends and family now convinced that she was having some sort of midlife crisis, she boarded the plane with one suitcase, her cat, and a one-way ticket.

“As soon as the plane was airborne, I burst into tears,” Cecilia says, laughing at the memory. “The poor girl beside me thought there was something terribly wrong. But I told her, ‘It’s OK, these are tears of joy.’ I actually did it!”

The tears were partly from relief, too. And bravery. Despite the fear, she was amazed that she had taken the leap, with only a desire to live in Italy and the knowledge that she belonged there.

These days, Cecilia often returns to the U.S., with each visit making the differences more obvious. In Italy, I noticed how people of all ages would do things together, how nobody talked about work, how they smiled and talked with each other. On each return to the States, I noticed more and more how people seemed unhappy, disconnected. Even among friends, people would either talk about work or be on their devices.”

It was a shock after the exuberant nature of Italian life. “I felt segregated, in the over-45, single, no children group. And I didn’t see any old people. Groups didn’t seem to intermingle. In Italy, it’s the opposite. I see large groups at, say, a restaurant, people of all ages: family friends, grandparents, parents, and children, who show a respect to their elders that I have never seen in the U.S. And I think that is what it’s all about, connection.”

In Italy, community is a real thing, not just a word.

Alone on her first Sunday in Italy, Cecilia was invited by her landlady, Antonella, to join her and some friends for Sunday lunch. The tradition has continued every Sunday for five years. “In Italy, community is a real thing, not just a word. People talk, listen, and hear you. They are interested. I feel how much they truly care and that I am a part of their group.”

One of Cecilia’s biggest challenges was schedules. “I am an American, used to 24-hours, things always open. In Assisi, I had to learn which hours, which days the stores are open. Train schedules, bus schedules, everything. There was no blueprint, no one to tell me; every day I had to figure things out. It was hard, but in retrospect, it was better. I paid attention and was alert and involved. It made me see that I had just been going through the motions before, and now I feel very alive. There were a few cultural challenges of that sort, but they were actually a benefit because it meant more conversation.”

Cecilia now works as a freelancer in strategic communications for an international foreign aid group, which means she can do her work anywhere. She also teaches English and hopes to teach full-time. She loves her life in Assisi, and although her advice would be to do it a little differently than the way she did (in hindsight, she admits that it would be best to have some savings, a plan, and a bit more local knowledge), it has worked out for Cecilia. She happily tells how in 2015, it took her 15 minutes to walk to the center of Assisi. Now it takes 45 minutes to make the same journey, because she stops and chats as she walks.

For someone who wants to make the move, Cecilia suggests: Visit first, get the lay of the land, make sure you feel comfortable, and listen for the little voice that says, as it did for her, “I could live here.”

Everything You Need to Know About Moving to Italy