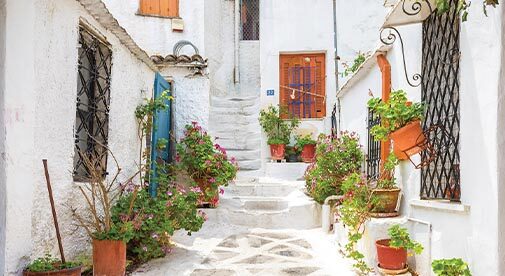 While Athens has a reputation as the “cradle of civilization,” it has its cozy domestic spots too. ©Scaliger/iStock.

I try to be measured when I talk about my life in Greece because I never want to make other people envious. But the truth is, I feel like I need to rub stardust out of my eyes every day when I wake up in my adopted country. I can’t believe how lucky I am.

My one-bedroom, 750-square-foot home lies directly beneath the Acropolis, and I teach night yoga classes on my roof deck under the stars with an illuminated view of the Parthenon. It’s a magical setting, and I love that an entire community has grown around these classes. Locals and visitors alike participate, and last summer a new student told me, “I heard about your classes from my friend who lives in Barcelona.” I guess the word is getting out.

My days start without an alarm.

My days start without an alarm and are filled with things I love. I teach yoga, and I write about topics I’m passionate about like the Enneagram, Kundalini yoga, nutrition, and living in Greece. My schedule is relatively fluid and, while I have deadlines and obligations, I rarely feel stressed. I end the day with a beach volleyball lesson or drinks with my friends, and because I live in a Mediterranean country, nights stretch on late. This I love.

Before I moved, I worked in San Francisco, California in a regular office job as a chief financial officer, leveraging my training as a Certified Public Accountant. My days were filled with spreadsheets, meetings, reports, and deadlines. The yoga I teach now was something I did on the side as a hobby. Life wasn’t bad, but, upon reflection, I wasn’t really living. I was existing. Only now do I understand the difference.

I moved to Greece through a series of baby steps. I had no significant connection to the country, but I began to feel a very clear pull, like a calling, to go to Athens. First, I came for three weeks and enrolled in an intensive language immersion. I joke that I crafted my own adult “study abroad” program. At the time, I wasn’t thinking of moving, but I wanted an adventure. Later the same year, I returned for a two-month stint to keep the adventure going. Four months after that, I moved permanently to Greece.

I moved without a local job or a significant relationship waiting for me in Athens, so it was a big step into the unknown. But it didn’t feel scary or anxiety-provoking because I had some experience living in the country. The idea of moving and starting a fresh new life energized me. That was in 2012, and I still feel a sense of excitement that I get to live here.

How Do I Financially Survive in Greece?

I say that my San Francisco condominium is my big employer because that is largely true. I own a two-bedroom, two-bathroom apartment that I rent out for about four times what I pay for rent in Athens. After paying my mortgage and San Francisco property taxes, I’m still left with a healthy margin of passive income. For the first three years of living in Greece, I continued my finance work remotely, staying up late to support my West Coast client base. As time passed, I began to understand that I could rely on the passive income of my San Francisco property, so I slowly dialed back my finance work. Now I do almost no finance work at all.

This change freed up my time immensely, and in 2015 I decided to write a book. The book is about two topics I love: Kundalini yoga and the Enneagram System of Personality, and while I had never thought of writing a book before, with more spare time on my hands, the idea bubbled to the surface and became a dream I pursued.

In 2017 I wrote a second book on the same topic. While the books are not big revenue earners, they have been hugely instrumental in raising my profile as a credible teacher and trainer of Kundalini yoga and the Enneagram. My website now gets enough traffic to earn money from Google Ads. My books are available on Amazon worldwide, so I get a monthly royalty check. And I also offer my books for digital download through my website, which means I often wake up to find I have a payment from books sold while I slept.

During this period when I started writing more seriously, I also began to notice there were real estate opportunities in Athens. With a long-time friend, we invested together and purchased an apartment near the Acropolis. I renovated the apartment and then put it on Airbnb. Then we found a second apartment and did the same. The Airbnb business model works brilliantly, and even with the pandemic, I’ve been able to diversify into long-term rentals to cover the expenses and generate passive income while we wait for tourism to return.

I have what is called a “portfolio career,” a career made up of various roles, and the mix of passive and active income is what makes my life here work. My strategy is to always try to have five distinct revenue streams. I have real estate rental income from San Francisco and Athens apartments as my first two revenue sources. I teach and consult for both yoga and the Enneagram. Teaching online means I can do it from anywhere in the world, and more importantly, I can have a global audience. This my third revenue stream. As a fourth revenue stream, I have passive income from my published books as well as ad income from my website. A future passive income goal is to start earning money from my YouTube channel. And I’m a freelance writer as my fifth revenue stream. The more I write and teach, the steadier and more meaningful those income streams become, so focusing on these now sets me up really well for the coming years. And as an added bonus, I write, teach, and study about things I love.

How Am I Here Legally?

People often ask, “How were you able to move to Greece?” I came on an “independent financial means” visa, which means I had to prove, among other things, that I have enough money to live in Greece without working in a Greek job. The requirements for each country are different, but in Greece this typically means you must show income of €2,000 (about $2,400) per month from outside sources transferred into a Greek bank account. With my San Francisco rental income, this isn’t a problem. I also have to show proof of health insurance and a variety of other administrative items each renewal period. It isn’t hard, but it requires some focus and energy.

Each country’s requirements are different, but many European countries have some version of this visa available to non-EU citizens. I file taxes in both countries, but there are agreements to avoid double taxation and, except for the fact there is more paperwork to track, the tax situation is not a big burden.

People ask if I felt lonely when I moved to a new country alone, and the answer is, by and large, I did not. I made friends quickly through social platforms like Meetup and Facebook expat and yoga groups. These sources gave me people to go out with in my early days and a way to get familiar with the city. On a deeper level, the people who own the store next door to my apartment became like an adopted family. Last year I even became the godmother to their new baby, Alexia.

My friends are a mix of expats and Greeks. I love the global flavor and the diverse perspectives of my expat friends and the genuine warmth and kindness of my local friends. I also find that the experience-rich, less consumer-oriented European values align with mine much better than the American values ever did. I was happy in San Francisco, but I’m much happier here in Greece.

Equally important to establishing new roots was cultivating the old relationships in my life with my long-term friends. I’m lucky that I moved to a country almost everyone wants to visit, so it hasn’t been hard to lure my American friends and family to come see me. With technology today, it isn’t hard to keep in touch through regular calls via Zoom and Skype. And while the flight is long, the visits are usually long too, allowing us to really connect and catch up.

If I could offer advice to anyone who is thinking of moving abroad, I would tell them to consider a staged approach. You don’t need to decide everything at once, but if you know a place you think you might want to live in, start visiting it regularly. Visit during all of the seasons so you get a good feel for the climate. Hire a native online language tutor while you are in your home country to get some exposure both to the language and the culture. Create a solid foundation eliminating as many unknowns as possible so if you do make the big move, it won’t feel so unfamiliar.

If you have a dream to move, don’t give up.

And if you have a dream to move, don’t give up on it. These dreams come from somewhere, and moving abroad may just be the best decision of your entire life. I know it was for me.

Cost of Living in Athens, Greece

Our Guide to Greek Culture and Traditions