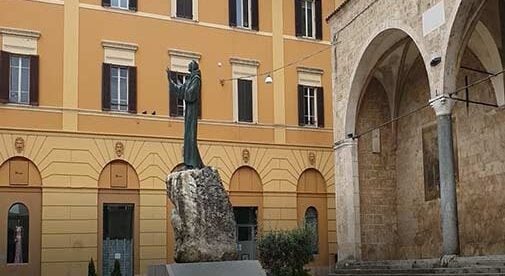 The video you are about to watch was taken in lockdown, and the only reason I was able to go out and shoot it was a friend, ex-Carabinieri (National Police force), who was a great help. Thankfully, Rieti was one of the last places to see the surge in cases and one of the first to see the fall in numbers.

Rieti, Italy, is located on a hill overlooking the Velino River in central Italy, 58 miles northeast of Rome.  It is the Umbilicus (belly button) or exact geographic center of Italy.

Rieti was first a Sabine city, then a Roman town.  It sits on the Via Salaria, or “Salt Road,” mid-way from the east coast of Italy, to Rome. It is called Via Salaria as the Romans paid their armies in salt—to cure their food—and the salt came past Rieti from the east where it was mined.

Hannibal and his armies trudged through the north end of the valley and left Rieti sitting to the south alone, in about 215 B.C. In 50 B.C. Cicero defended Rieti against armies from the north.

The walls you see today are medieval. Once one of the longest continuous medieval walls in Europe, they were built in the first half of the 13th century. The beautiful Cathedral of Rieti begun construction in 1106 and was finally consecrated in 1225. For many, it is the beginning of the “Walk of St Francis,” who established four monasteries in the valley. Three of which still operate today.

Piazza Vittorio Emanuele, the center of the old city, sits on top of the ruins of an ancient Roman forum. Constructed in the13th century, and reconstructed and rebuilt over the centuries. The Communal offices we see today were erected in the18th and 19th centuries.

Piazza San Rufo, the Umbilicus of Italy (exact geographic center), was initially constructed in 1109, and today is the site of the old Church of San Rufo and two local restaurants.

The main street leaving the Piazza Vit. Emanuele—one minute from Piazza San Rufo and heading west is Via Roma, the main shopping street. The road is built on a series of Roman Arches still evident today, that once brought goods and people up from the River to the old forum.

You can see the old arches and part of the Roman bridge that crossed the Velino on a tour of “Rieti Sotterranea” or Reiti Underground. It is fascinating to walk underneath the street you were just on, under old Roman arches that still support the road and through original Roman passageways still existing under the city.

Present day Rieti is a town of 50,000 people. The area is predominantly agricultural with a heavy emphasis on a green economy and bio agricultural restaurants, and food. Some local restaurants can measure the closeness of the majority of their food to the table at less than one kilometer (.610 of a mile).

Wines are produced further to the south in the province of Lazio and some of them are excellent.  Tourism is a very small part of the local economy with the Monastery of Greccio and the Path of St. Francis being the major draw to the area.

While not your typical tourist destination, Rieti has a full and diverse history and many close historical and archeological sites, that can give you a relaxing, less expensive Italian vacation.

Expat Diary: What is Life Like in Italy During Lockdown?