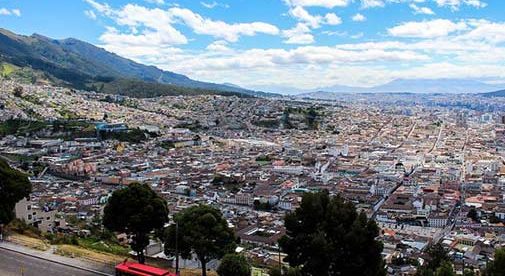 The awesome view of Quito from La Virgen del Panecillo.

After a month of searching for our future home in Ecuador, my wife Monica and I, were back where we had started, in Quito’s Centro Histórico. Knowing that we had to wake up at 3 a.m. for the shuttle to whisk us off to the airport—the first leg of many on our trip back to Seattle—I suggested that maybe we should just stay up, and out, and sleep on the plane.

Enticing as that idea was, we had already booked the same lovely hotel we had stayed in on our first go-round, albeit just for this last night, and its comfy bed seemed a more attractive, if conservative, option. Also, my wife stared me straight in the eyes with that, “I hope you’re joking” look that I know so well.

So, how do you spend your last day and night in a vast and busy city like Ecuador’s capital? Here’s what we chose.

Although “Heladeria” (ice cream) is in their name, San Agustin is also well-known for their savory dishes. My wife had the ceviche de camarone (shrimp ceviche) and I had the seco de chivo (braised goat stew) one last time. We had eaten here on several occasions on our first stay in Quito and each time, including this last supper, we were glad we did.

Seeing the Sights One Last Time

Knowing this was perhaps our last visit to Quito, I just had to take one last stroll around the city’s greatest hits, its three main plazas. The Plaza de la Independencia, also known as the Plaza Grande, was packed, as usual. It may be Quito’s favorite spot to take a break and watch the rest of the city go by.

Next, just a few blocks south to the Plaza San Francisco which, although still undergoing a massive reconstruction, has the stunning cathedral that somehow remains slightly detached from it all. We stopped, once again, just underneath its northern corner at the Cafe Tianguez for a beer and the view.

Finally, to make the triangle complete, we walked the few blocks east to say goodbye to the Plaza Santo Domingo just as the sun was setting.

The warm-up at Tianguez had gotten us thinking. Where’s a spot for a beer or two a bit closer to home? Monica, with trusty TripAdvisor always on the ready, found Bandito Brewing at Olmedo E1-136, a few blocks south of the Mercado Central.

Founded and owned by a few guys from Oregon, all I could think was, how did we miss this place when we had so much time a month ago? Well, better late than never, as they say, and, as they say on TripAdvisor, it was arguably the best beer we had in our Ecuadorian month.

Being from Seattle, my wife and I have done a lot of research on craft beers and breweries. We are, as they say, professionals with decades of experience under our belts, or at least under my belt as my wife works out quite hard to hide her experience. Back to the brewery, and the beer, at Bandito’s. It’s tasty, from the light and very hoppy IPA to the coffee-infused Cloud Forest porter. I recommend them all.

Just a few blocks west and then a few blocks north and we are back in our neighborhood, however temporarily. We had often enjoyed the plaza in front of the Teatro Sucre, but, this night, with its soft lights and colorful crowd, the plaza was more entertaining and enjoyable than ever. Clowns and jugglers mesmerizing little children who, in turn, were mesmerizing their parents and grandparents; couples holding hands walking slowly—very slowly—because they know there is nowhere else to go, they are already there; and parties, from one to a baker’s dozen, in the outdoor cafés, observing it all, knowing it’s the best entertainment around.

Eventually, after quite a while enjoying the show from a bench, a part of—as well as apart from—the scene at the plaza, without speaking, just a nod from my wife and it was time to go home.

As we got up, leaning in that direction, we almost ran into an entire family, maybe a dozen from three or even four generations, each with their ice cream cones in hand. None of them seemed to notice our near-miss because they were concentrating on their ice cream. My wife looked at me, again without a word, but this time I had to ask, “You want some?” “Just one to share,” she bargained as we sauntered a bit up Guayaquil to the many ice cream vendors who come right out onto the crowded sidewalk to hawk their treats to the willing passersby, even those in cars slightly stuck in traffic. I agreed to just one cone, with chocolate and vanilla to capture the extremes, and we came back to the same bench in the same plaza for more of the same entertainment, but with a whole new cast of characters, this time with a sweet treat to accompany it all.

We were home at the highly recommended Casa El Edén on Esmeraldas just west of Guayaquil by 10 p.m., and were hoping to be really home about 24 hours from then. We had enjoyed a great last night on the town in Quito. We got a bit of sleep in our comfy bed and just a bit more on the planes to Seattle. And we made it home, even if only temporarily, safe and sound. Now that’s a happy ending.

A Full Life Living On Social Security Of $1,000 A Month In Cotacachi

Moving To Ecuador: Should I Bring A Container Or A Suitcase?