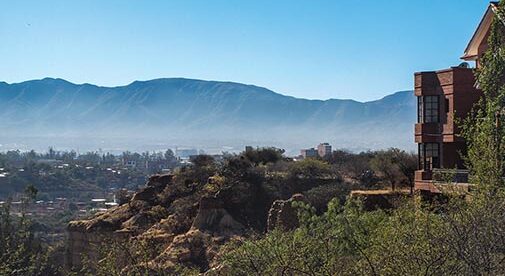 Sophisticated city or unspoiled countryside, in Bolivia, you can take your choice of either one. ©Jason Holland/International Living

“Look around, and you tell me why I moved here,” says Paul Harris, 52, with a wave of his hand as we sit over a mouth-watering bowl of Bolivia’s lunch staple, sopa de mani (peanut soup). We’re on the second floor of the central market in sub-tropical Samaipata. Below us, women shuffle from one fruit stall to the next, filling their baskets with avocadoes the size of softballs, sunset-red tomatoes on the vine, and the exotic chirimoya, a fruit which Mark Twain called “deliciousness itself.”

“I moved here blind,” says Paul. “I hadn’t even really traveled much outside of Canada before I decided to retire [he worked in insurance], sell my house, and head south. Fifty winters of ice storms were enough. I went searching for the sun and stumbled upon the Garden of Eden.”

Samaipata isn’t your run-of-the-mill South American retirement destination. Given that it’s a landlocked country, and the poorest on the continent, it’s no wonder that most people overlook Bolivia. Expats more often head farther west to the coastal and more developed countries of Peru and Ecuador. But venturing outside of the beach’s reach and into the altiplano means tapping into a less-traveled, fully-authentic Bolivian community intermingled with expats as adventurous as yourself.

“The allure of living off the beaten path is what drew me here,” says Paul. “Toronto is a huge city. I’d had enough of that life. I wanted simplicity. I wanted to see the stars at night and hear only the crickets outside my window. I wanted roosters to wake me up in the morning, not an alarm clock. Living here is all of that. It’s like living in another time.”

That’s not to say Samaipata isn’t a developed town. Colorful colonial architecture and traffic-free dirt roads display the Spanish influence of the 17th century, but you quickly notice the impact the influx of tranquility-seeking nature lovers from Europe has had on the area since the 1970s. Attracted to the cooler climate and serene landscape of the foothills of the Andes, many obtained permanent residency visas, turning the tiny town of 4,500 into a melting pot of nationalities.

“Most mornings I get espresso and a pastry at the café across from the plaza. I use the WiFi and catch up with friends, or I just watch the world drift by,” Paul says. “Evenings I’ll grab a wood-fired pizza and a locally brewed Belgian-style beer and listen to live music until the sun goes down. And once or twice a week I’ll head to the cocktail bar for happy hour and sit on the terrace and watch the sunset. Sometimes I give in and order a cheeseburger. I’m indulging like I never could in Toronto.”

The possibility to indulge exists for two reasons: the cost of living in Samaipata is astoundingly low. A furnished, one-bedroom terraced apartment can be rented for under $500 a month. So eating out for every meal isn’t going to break the bank, and an active lifestyle is too tempting to pass up.

“I bought myself a mountain bike and ride up to El Fuerte [a local site with 4th- century pre-Inca ruins] twice a week,” he says. “The weather is perfect, around 70 F, mostly, and the view is spectacular. Afterward I eat a big meal at the market for a dollar and change. With all the vegetarian options and fresh produce grown right down the street, I’m in the best shape of my life.”

But if mountain biking 30 miles a week and limiting yourself to only fruits and vegetables doesn’t sound like the ideal retired life, there’s a more relaxing and indulgent side to Samaipata that’s popular with locals and expats alike—the daily siesta.

“It’s something I wish existed in Canada,” Paul says with a laugh. “The idea of taking a nap during your three-hour lunch break sounds like something everyone could live with.”

Sitting at the gates of Amboró National Park (the most biologically diverse jungle in the world) Samaipata is a remarkable juxtaposition of wild, untamed wilderness (monkeys, giant anteaters, spectacled bears, and jaguars reside in the jungle), and safe, comfortable living—the city of Santa Cruz (consular services, top-notch private hospitals at developing-world prices, and the international airport with one-stop flights to the U.S. for under $400), is less than three hours away.

“I’ve been on a couple of treks into Amboró,” recalls Paul. “They drive you in with a Land Cruiser, a guide leads you to a village a few miles inside the park, and you stay the night in a private hut. I lounged around in a hammock and read my Kindle in the evening while an indigenous woman cooked dinner for me and the other guests. It’s the epitome of simple living. The buzz of insects was unreal and unbelievably peaceful. I slept like a baby.”

It’s a treat to get away from it all, but also to get back to civilization. “The next day I was back in Samaipata, walking the quiet dirt road to get a scoop of ice cream from the German-owned restaurant on the edge of town. An incredibly authentic jungle experience followed by chocolate ice cream, and none of it put a dent in my wallet. Where else can you live like this?”