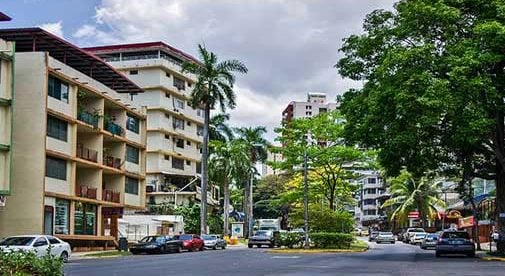 “Safety” is a subjective term, of course. Is your current city safe? Look at “top ten” lists for the world’s safest cities and you won’t find any in the U.S.

That said, if you observe the many expats and well-heeled locals who live here, you’ll find that they live out in the open—not shut up in heavily guarded compounds or followed about by armed guards.

Though I don’t recommend that you wear fancy jewelry or carry a lot of cash, the truth is you’ll see signs of prosperity everywhere you look. People drive nice cars and carry smart phones. Women go out alone at night and drive cross-country without fear. Children play in parks and go to concerts and festivals.

It helps that Panamanians are so accustomed to foreigners. Since before construction was completed on the Panama Canal in 1914, Panama has been a crossroads for people from the Americas, Europe, and beyond. You’ll find every race, religion, and ethnicity represented here, many of them attracted by the stable, pro-business government and welcoming residence programs.

So, does it follow that Panama is free from crime? No…I’ve traveled the globe and I’ve never encountered a country that was free from crime or corruption. But it is relatively easy to keep yourself from becoming a target for crime.

On occasion, visitors to Panama make the mistake of letting their guard down completely—something they’d never do back home. In any unfamiliar city or town, it’s important to be aware of your surroundings and to do what you can to blend in. Big cities (and small ones, too) always have good and bad areas. Use your city smarts and you’ll see just how easy it is to avoid becoming a victim.

For example, you’ll note that in Panama, as in most of Latin America, most houses have metal grills over the windows. They look decorative, but they’re there to discourage break-ins. The average Panamanian family also has at least one dog who will bark at passersby or potential intruders. Here in Panama—or whatever country you’re moving to—we recommend doing as your neighbors do.

We agree that Panama is very attractive when it comes to safety and security, and the expats who choose to live here obviously concur. Single expat women report feeling safe, whether they live in Panama City, the beach town of Coronado, or the mountain town of Boquete. There are small towns where people don’t lock their doors or hesitate to walk at night.

In 2012, Connie and Mikkel Moller hopped on a bus from Panama City. Their destination, the fishing village of Pedasi. Population: under 5,000. “We loved it. We fell in love with Pedasi. The people, the ambience…everything about it.”

They found Pedasi to be a sleepy, tranquil town with a welcoming expat community. For the Mollers, it was the perfect retirement destination, and within a matter of days they’d decided to make it their new home.

“We chose it for many reasons, primarily because we love the ocean,” they say. The Pedasi region is home to a string of beaches, each more beautiful than the last. “Our friends back home were worried about safety,” says Connie. “But I feel safer here. This town is like Mayberry in the Andy Griffith Show. I can walk at night and not be afraid. Children play out in the street—that doesn’t happen in the U.S. anymore. It’s kind of like where I grew up…I could be out all day and play and ride my bike and do whatever. We like that about Pedasi.”

She adds: “Since it’s a small town, everybody knows everybody. And everybody is friendly and helpful.” Not just the locals, but the expats, too. From their first day, the Mollers were accepted and welcomed. People showed them around, helped them find a rental, and introduced them to other expats. Almost instantly, they were part of a tight-knit group they could count on for help or advice.

In the Panama destinations popular with expats, your biggest concern is likely to be petty theft or break-ins. Random violence is practically unheard of here. Panama has a visible police presence and a cadre of tourist police. Crimes against tourists or foreigners are seriously dealt with. The police are also reliable—detectives do catch criminals here.

What else helps keep Panama as safe as it is? The country continues to grow its middle class and make successful efforts to reduce poverty. There isn’t the envy or racial tension you might find in other economically deprived areas where Westerners have swept in. In large part, this is because large international communities have been here for decades. Plus, Panama is a land of opportunity, and locals who strive to improve their lot can go far. Finally, new and better urban planning, social programs, and an abundance of fresh, locally grown food don’t hurt.