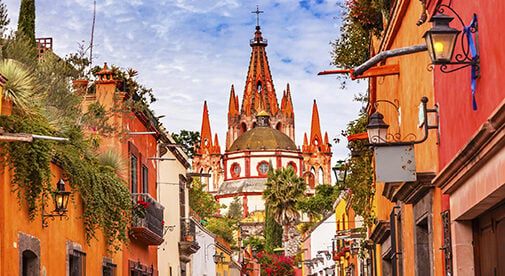 Its churches are masterpieces of Baroque architecture. The colonial-era mansions pressing in upon its cobbled lanes and shady plazas hide flower-filled courtyards with tinkling fountains.

Bougainvillea cascades down pastel-colored walls in the town’s historic heart, which is compact, walkable, and strictly protected by a raft of regulations.

San Miguel de Allende was once among the richest cities in the world. The surrounding hills overflowed with silver. Wealth created from mining this precious metal went toward building the stunning Spanish colonial buildings that stand in San Miguel today.

San Miguel’s beauty and the low cost of living first attracted American artists in the 1930s. More and more came as word got out about this perfect-weather town where the light and colors worked magic.

The town grew to become an important international center of the arts.

It’s now a fashionable place, drawing sophisticated visitors from across Mexico and around the world.

You can take an art class…or buy a world-class piece in one of the many galleries. There are music festivals, theatre, and, of course, all the traditional Mexican celebrations that fill the calendar.

All that and a climate that is never too hot or too cold, never too wet or too dry.

My researcher, Jason Holland, who has lived abroad for nearly 10 years, has spent the last four in San Miguel. As he tells me, he and his family finally found a place that caused them to reconsider their previous nomadic ways—they had lived in eight locations in two countries before this move.

And he isn’t the only one drawn by San Miguel’s charms. It’s been a popular tourist destination for decades. And, after a pandemic dip, the industry is showing renewed signs of life, as Jason explains below.

Tourism Returns to the Best Small City in the World

“Whoa. You have to see this,” said my wife as she handed me her phone.

A friend of ours had shared on Facebook photos of the crowds in San Miguel de Allende’s historic centro from the previous night’s Day of the Dead festivities. One of the principal streets was packed shoulder-to-shoulder for a parade. The main plaza where the biggest public gatherings take place, called the Jardin, was a sea of people.

I made it out the next night to check out some of the ofrendas (altars honoring deceased relatives), and while it wasn’t as packed as the night before, there were still plenty of people.

My wife and I had a hard time finding a table for dinner that night. Every restaurant was busy. Mostly there were tourists from other parts of Mexico, drawn by San Miguel’s famed Day of the Dead festivities with the restored Baroque colonial architecture and enchanting plazas as the backdrop. But there were plenty of foreigners too. Families, retirees, young couples, groups of friends.

This time last year was different story. No public gatherings. No big events. The part of the Jardin with the benches was roped off to discourage people from hanging around too long.

But now, it seems, tourism is back to San Miguel de Allende in a big way.

This is a hugely popular expat haven—about 10% of the population is estimated to be foreign-born. These folks relish the colonial beauty, the temperate climate, the focus on arts and culture, and more. And it’s also a major tourist destination.

Most tourists come from within Mexico. Starting Friday afternoons, the middle- and upper-class of Mexico City, just about 4 hours’ drive south start streaming into town for weekend getaways. People come from other major cities too, especially on holidays and when the kids are out of school in spring and summer.

A whole eco-system of chic, high-end boutiques selling designer fashions and home décor as well as shops offering up imported wines, cheeses, and the like, has sprung up to cater to this crowd, not to mention gourmet food halls and fancy restaurants and rooftop bars.

It’s as if they’ve tried to recreate all the comforts from the wealthy neighborhoods of Mexico City…in the grand colonial buildings of San Miguel. Which, in my opinion, seems like an odd choice when you’re trying to escape the big city.

But we also get plenty of international visitors. Pre-pandemic, I would see at least two or three big tour groups from China come through town a week, no doubt a stop on their bus tour of Mexico. Young fashionably dressed couples from Japan were common too, often posing for Instagram shots in front of particularly photogenic vistas.

Older couples from the U.S., Canada, and Europe have also been a mainstay. Many come in winter and spend months in town.

We get a different type of visitor in San Miguel than other parts of Mexico. This is not a big party town or a place of all-inclusive beach vacations where you never set foot outside the resort.

Not that it’s boring…

There are restaurants of every cuisine; more than 350 in all. You’ll find more art galleries and craft markets than night clubs. Live music runs more toward jazz, flamenco, and classical. And it seems like there is always some sort of traditional parade, fair, or celebration of some sort.

Visitors tend to be well-heeled, well-dressed…sophisticated and worldly. Interested in the arts. They come to experience Mexico and its culture in a place where many of pivotal events of this country’s history took place. In fact, one of San Miguel’s nicknames is the “Heart of Mexico.”

This crowd isn’t afraid to spend money…on a meal…on a painting or unique piece of furniture that they have shipped home…or on a place to stay.

And now, after a lengthy absence during the pandemic, the tourists are back. And that’s great news for hoteliers and vacation rental owners.

There are a few medium-sized hotels in town. But due to the restrictions on construction in the colonial district, most are boutique hotels or little guesthouses.

Many visitors stay in vacation rentals. A two-bedroom apartment or home in centro will run $60 and up, with higher prices the closer you are to the Jardin (Airbnb listings usually include the distance). Luxury furnishings, amenities like a rooftop terrace with a view over the city, and especially of the famed pink stone Gothic-style belltower of the main church in the Jardin, also command higher rates—think $100…$200 per night.

Often locals or expats will convert part of their home into a suite or small apartment to rent out. With the often-sprawling homes in centro, it can be surprisingly practical and still private, whether for short-term visitors or the snowbirds and “part-time” expats after medium- and long-term rentals. They’re ready to pay $1,000 or more per month for a two-bedroom.

Running a vacation rental in the centro can be tricky. Home prices in the best neighborhoods based on central location or panoramic views can be high. A half-million dollars, $1 million, $2 million, although there are often bargains, especially for smaller homes or condos. Neighborhoods to check out here are Guadiana, Atascadero, Balcones, and Centro.

Go a further afield, or find a place in need of fixing up, and you can pay $250,000…$300,000 in neighborhoods like Guadalupe, Allende, and San Antonio. You can find real bargains in even farther out “colonias” like Independencia and San Rafael.

An intriguing option is to buy and rent out a modern condo in one of the many gated communities being built on the outskirts of town. Visitors aren’t surrounded by colonial charm, but it’s usually a short enough taxi ride or even walkable to centro.

And here’s the thing…

Mexican visitors, who make up a majority of San Miguel’s visitors, prefer these places. They come with the kids and extended family…they need room. They prefer sleek and new, just like their fancy apartments in Mexico City. They want the community pools and garden area, a place to barbecue, a gym, nice landscaping, club house, and the feeling of safety that comes with a gated entrance and 24-hour security.

You simply can’t get that list in centro. Plus, the parking situation is horrible.

After living in centro for almost four years, my family and I recently relocated to one of these modern communities. It’s very quiet most days, with probably less than half of the homes occupied by full-time residents. But it gets busier on weekends as second-home owners and renters come in. And for holidays the population inside the gates probably doubles.

We were resistant at first. People say why come to Mexico if you’re going just live in “suburbia”…that it’s not the “real Mexico.” But we don’t get hung up on that. Tell my Mexican neighbors they’re not in Mexico! Besides, we enjoy the amenities…my kids have a ton of friends. It’s a great lifestyle. And we don’t have to worry about the maintenance issues that come with living in a colonial home.

Plus, anytime we want to be in centro, it’s about a 30-minute walk or five-minute taxi ride.

I feel like we have the best of both worlds.

Everything You Need to Know About Retiring in Mexico