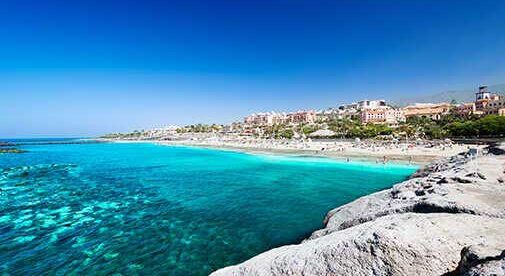 Canary Islanders live on their own time. Clustered in the Atlantic off the coast of North Africa (but part of Spain since the 1500s), the seven subtropical islands are in the same time zone as London rather than Madrid—not that they’ll admit it. Here, the clocks are set to what the locals call “hora Canaria,” or “Canary Time.”

If that sounds stubborn, that’s because it is: the Canary Islands refuse to be quite like anywhere else, offering a form of island life that is European with a twist, off the beaten path, and in many ways delightful—though at times a bit inconvenient.

I’m from Chicago but I live on Tenerife, the largest of the Canaries, because I married a local and we’ve decided to start a family here. And already, our move to the islands has sparked some interest. My mom has decided to join us out here, at least part of the year, and help out (OK, spoil) the grandkids.

For my mom, who’s 63, what matters most is weather, and that’s where the Canaries shine. Their climate has been described as the best on Earth by sources as early as the ancient Romans (who called the archipelago “The Fortunate Isles”). They’re in the chilly Atlantic, but they benefit from warm airflow from the nearby Sahara Desert. The result is an extremely stable climate with temperatures between 60 F and 80 F all year long, and plenty of sunshine. Warm without being too hot, low humidity, and no tropical storms either. For a Midwesterner like me, it almost seems too good to be true.

It’s not your traditional European climate—and in terms of location, it’s not what we normally think of as Europe either. In fact, it’s a bit remote. The Spanish mainland (here called “the peninsula”) is a two-hour flight north. That said, multiple flights every day make Tenerife, home to about a million people, an easy place to fly to and from.

That’s partly why I’m going to focus on Tenerife for this article. The other Canary Islands have many advantages. Gran Canaria, for instance, offers amazing sailing, and I have known expats who make their homes on the rugged Fuertaventura, or the deeply forested La Palma. But I notice that they are often younger, and pretty adventurous in spirit. The other six islands make for great day trips by ferry, but Tenerife is by far the primary destination in terms of amenities, healthcare, convenience, and transportation. It’s the only Canary where I’d consider living. 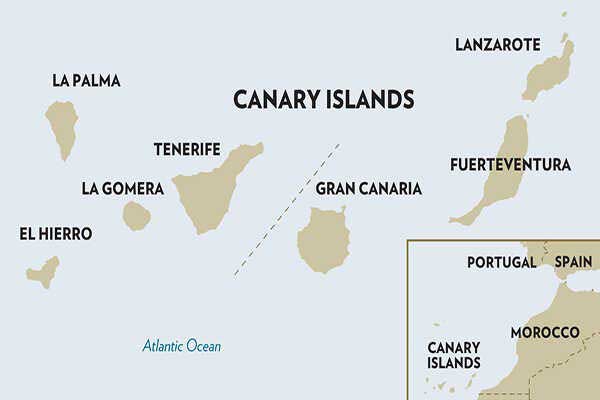 The heart of Tenerife is El Teide, a massive volcanic mountain standing nearly 13,000 feet high. Its presence is magical, as the native Guanche people once knew, and you can’t help feeling a sense of enchantment when you look up and see its snowcapped peak soaring above the clouds. Brave souls can take a winding mountain road half-way up, and a cable car even farther. Personally, I suffer from motion sickness, so I prefer to stay at sea level, and appreciate El Teide from afar. The peak was the last glimpse of the Old World that Christopher Columbus saw as he sailed away for the New.

There are also more accessible natural wonders. The eastern tip of Tenerife is home to the Anaga Rural Park, where I have been hiking a few times with some obliging locals who know the way. It is something out of a movie set: corridors of ancient moss-draped laurel trees and spectacular cliffs plunging into the ocean. Paths range in difficulty, and there’s often a restaurant near the trailhead so you can meriendar—have a snack.

That brings us to food. Canarian fare is simple and wholesome—very much in line with the healthy “Mediterranean” diet. Think lots of fish, fresh vegetables, and locally produced wine. You generally won’t find traditional Spanish tapas culture here, though there is a wide range of restaurants in the bigger cities.

My favorite Canarian specialty is mojo, a delicious sauce made with red and green peppers. The Tenerifños heap it onto boiled bonitos—the island’s signature potato. It sounds simple, but don’t be fooled: bonitos take potatoes to a whole new level. Rich and buttery, they are a main course all by themselves. Mojo also tastes great slathered onto chicken and steak grilled at the local guachinches, their word for “hole-in-the-wall BBQ joints.” If you like juicy local chicken grilled to perfection, look no further (and think in terms of around $6 for a half-chicken with home fries and salad.

The towns and cities of Tenerife are strung in a ring around the island’s perimeter, often on the sloping sides of mountainous terrain, and connected by a highway. The most populated areas are the biggest cities, Santa Cruz de Tenerife, and La Laguna, which meld into one another and take up much of the island’s tapered eastern tip.

Visiting La Laguna, home to the only university on the islands, is a lovely day or two of walking and exploration. Broad sunlit streets and 17th-century buildings evoke all the beauty of a traditional Spanish town. By contrast, Santa Cruz is more of an industrial-feeling port city with serious traffic. That’s where you go to do government business or catch the ferry to nearby islands.

Locals divide the island between north and south. The south, dominated by the beach resort area called Playa de Las Americas, is the main destination for European tourists, particularly those from Britain and Germany. English and German are widely spoken there, and an American would have no problem communicating.

The north, on the other hand, is more pastoral and traditional. It includes the gorgeous, historically rich Valley of La Orotava, where I live now. There are a couple of beautiful black-sand beaches, but the culture isn’t very beach-centric. The north offers a simple lifestyle that combines the temperatures and colors of Latin America (many Canarios have Venezuelan backgrounds) with the quaint hominess of small-town Europe. A typical day offers relaxed afternoons sitting and chatting with your neighbors over beer or wine at one of the many local cafés.

Northern towns include Buena Vista del Norte, with a beautiful golf course and more tourist-oriented amenities. The more tourists there are in any given town, the more likely you’ll be able to get by without speaking Spanish.

Still, no matter where you are in the Canaries, the locals are pleasant. They move at the measured pace of Spaniards more generally, with the added relaxation that comes with island life. Nobody gets antsy or impolite waiting in line at the post office. And the café culture is incredibly civilized. It’s so easy to strike up a friendship over a glass of wine.

For an American, it’s a pleasant change of pace to be greeted with a buenos días every time I pass someone on the street, or to be affectionately called mi niño—“my boy,” which is the local term of endearment, used by all.

The practicalities of living on Tenerife are a mixed bag. The healthcare, on the one hand, is excellent. Spain’s top-notch healthcare system is fully present in the Canaries, centered at the University Hospital in La Laguna. My wife had a complicated pregnancy, and the quality of care was top-notch, although it’s not quite as client-centered as the American system. We sometimes waited an extra hour or two for an appointment, and didn’t get to stick with one preferred doctor.

Access to the public system for nonemergency purposes is only possible if you’re a citizen, a resident, or employed in Spain. Otherwise, for visitors or expats, private insurance options are available. I currently pay $50 per month for private insurance and go to a private clinic, part of the pan-European Clinica Vida network. My mother does the same, and her experiences have been positive: “The healthcare here is less formal—less of a customer service mentality,” she says, “but the care is good. It helps to know some Spanish.”

Getting to and from the local clinics is easy with a car. “Driving up and down these hills is a little crazy,” my mom reports, “but manageable once you get used to them.” For me and my wife, getting to the University Hospital, an hour away in La Laguna, was easy too—once we figured out the kinks of island transportation. The highway fills up every morning and evening, and traffic becomes a big problem. But if you can miss rush hour, you’re home free.

Furthermore, there’s a first-rate bus system that will take you pretty much anywhere, with very frequent buses. They’re all well-appointed coaches with comfy seats. My wife’s grandmother, now 83, takes the bus to and from all of her healthcare appointments.

Becoming a legal resident of Spain takes time and paperwork, as is to be expected. In addition to the usual methods (marriage or getting a job here), for retirees, proof of sufficient income and savings can be enough to qualify. Barring that, you’re limited to the standard rules of the Schengen area: 90 days in the country out of every 180. That’s not so bad for a snowbird.

You can get a decent apartment for under $100k.

My mom has plans to come here for February, March, and April next year—a perfect way to avoid the most depressing parts of the North American winter. She’s looked into real estate too, and found the market encouraging. “Property taxes are incredibly low,” she explains, “and you can get a decent apartment for under $100,000.” That’s about 30 minutes inland—the situation is obviously different in the more touristy south or closer to the coast, with apartments starting closer to $200,000 and going up from there.

It’s hard to capture the feeling of Tenerife. As a frequent European traveler, I feel very much at home here. Still, there’s something about the place that makes it unlike anywhere else. My suggestion is to stop by for a week or two during your next trip to France, Spain, or Italy—there are direct flights from pretty much every European capital. You might find that hora Canaria is the right timezone for you.

The Best Beaches in the Canary Islands

Infographic: Which Canary Island Is Right For You?