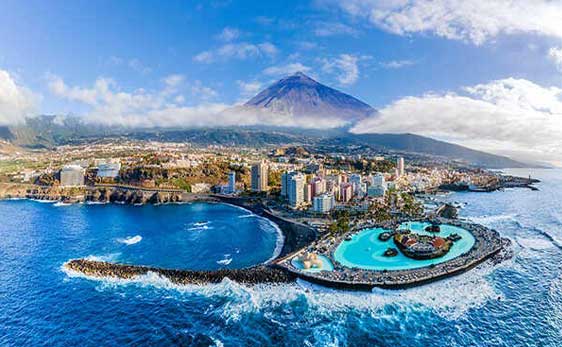 Retire in Tenerife, the “Island City” of Spain

The territory of Tenerife Island, once one of nine native kingdoms called “menceyatos,” was the last Canary Island to be conquered by the Spanish (1496). During the 18th century, Tenerife was an important island for commerce between Spain and the Americas. Products such as rum, cane sugar, and an insect dye called “cochineal” were regularly sent to Cuba, Mexico, and Venezuela. Today, the island is primarily focused on tourism and the service industry.

The island of Tenerife was formed by volcanic eruptions in the Atlantic Ocean and the fusion of mountain ranges. It is about 198 miles east of the Moroccan coast, and the largest of the Canary Islands. At 785 square miles, its highest point is Mount Teide, sitting at 12,188 feet above sea level. The imposing mountain is the highest point in Spain, and the third-largest volcano in the world.

Like other islands in the archipelago, Tenerife is home to a large number of expats, many of them from Europe. It also has many stunning rock formations and natural parks.

The island of Tenerife is home to almost half of the Canary Islands’ immigrants. The population is divided into three types of zones; the capital city of Santa Cruz, the southern coastal cities like Las Galletas, El Medano, San Miguel, and Granadilla de Abona, and the northern cities of Puerto de la Cruz, La Laguna, and Buenavista. Most residents live in the capital city.

Tenerife is a Spanish-speaking island with a rich literary history influenced by Spain and dating back to the 16th century. Canarian poet Antonio de Viana wrote Antiquities of the Fortunate Isles (1604), and 17th-century painters Gaspar de Quevedo and Luis de La Cruz Y Rios have works hanging in some of the island’s finest churches.

Santa Cruz, Tenerife is one of the safest places in Europe when compared to other large cities such as London, Paris, and Madrid. That said, there is a bustling nightlife in some areas which can attract things like petty crime, drinking, and drug use. If you’re planning on staying away from nightclubs and bars, you will be perfectly fine. There have also been reported incidents of pickpocketing in areas where tourists frequent. Avoid leaving valuable items or bags unattended.

Tenerife’s climate is generally warm and tropical with lots of sunshine and a low amount of rain. The climate in Santa Cruz is sunny and warm, nearly year-round. The summer months run from May to October and are usually humid and hot. The hottest month of the year is August, with an average temperature of 75 F. Winter runs from November to April, January being the coolest month at a comfortable 62 F. The sea currents near the Canary Islands tend to have a cooling effect on the coast and the beaches of the island. Water temperatures in the ocean average about 75 F in September, making it the best month to frequent local beaches.

One of several mountain ranges on the island, the Macizo de Anaga is designated as a UNESCO biosphere reserve. The Macizo de Anaga has several impressive mountains including Bichuelo, Chinobre, and Cruz de Taborno. The region is a large natural park and is home to a significant number of endemic animal and plant species. One of the most impressive features of this landscape is the Acantilados de Los Gigantes (Cliffs of the Giants), a 1,600-foot vertical wall of rock. In fact, more than 48% of the island is protected land. The natural parks and mountainous terrain make the region walkable and a photographer’s dream.

Santa Cruz has a Museum of Nature and Man with a focus on the preservation of Guanche mummies on the island. The Museum of the History of Tenerife, located in La Laguna, is a great place to learn about the development and history of Tenerife since the 15th century. The island has a well-developed system of motorways linking the different regions together. Public transportation by bus is accessible on most of the island in the major cities and towns, and cable cars are available starting from Mount Teide base station, and across the Teide National Park to the upper station.

Retirees in Tenerife have access to the European healthcare system. There are four main hospitals on the island, Hospital Universitario Nuestra Senora de Candelaria, Hospital del Norte de Tenerife, Hospital del Sur de Tenerife, and Hospital Universitario de Canarias. The first two have specialist facilities and service other Canary Islands. The other two provide ambulatory and emergency services, rehabilitation, and advanced diagnosis to patients. There are many other clinics offering health care services as well.

Like Gran Canaria, Tenerife is an autonomous territory of Spain. It has a special status with the European Union, allowing it to charge lower taxes than the rest of Spain. Its large economy is central to the Canary Islands and represents the highest GDP in the region. Tenerife is known for its service sector. In 2014, the island hosted more than 11 million foreign visitors, with people from the UK, Germany, and Sweden making up the largest groups of tourists. Secondary to that are the energy and construction sectors.

Residents of Tenerife enjoy more than 1,400 plant species such as the Canary Islands dragon tree and the Tenerife bugloss, and over 400 fish species, 56 bird species, as well as many other reptiles and mammals. It is most known for its sea turtles, whales, and dolphins.

The city of Santa Cruz offers impressive architectural landmarks such as the Auditorio de Tenerife, which is home to the Tenerife Symphony Orchestra, and the Castle of San Andres, in the village of San Andres. The castle served to protect Tenerife from pirate attacks during the 18th century. Nearby San Cristobal de la Laguna is home to the Church of the Concepcion which dates back to 1500. Visitors can climb up the tower for an amazing view of the city.

In the coastal town of Taganana, you can find an important historic site called “Stone of the Guanches” that is used by the Indigenous of the island for mummification rituals. You can also visit several nearby viewpoints, including Mirador Risco Amogoje and Mirador Hacia Taganana.  Tenerife has about 41.7 miles of beaches on its coastline. El Medano is one of the nicest beaches in the southern part of the island. Located in the city of Granadilla de Abona, you can enjoy water sports and ideal swimming conditions there. Tenerife’s beaches have black-sand pebbles on the northern part of the island, and more typical clear and light-colored sand on the south-west coast.

As well as the breathtaking landscapes, expats here can shop for everything they need in the city of Santa Cruz. Centro Comercial Meridiano, Centro Comercial Anaza Carrefour, and Grupo Jugueterias La Casita are three of the best malls available to residents. There are also numerous smaller shopping centers around the island, as well as specialty and gift shops, restaurants, and cafes to choose from.

Cost of Living in Tenerife

The capital city of Tenerife, Santa Cruz, is one of the more affordable places to live in the world. Rent is about 74% lower in Santa Cruz de Tenerife than in Washington DC, and 55% lower than in Brampton, Canada. A one-bedroom apartment in Santa Cruz will cost between $530 and $700, while a three-bedroom unit will run you between $780 and $1,000.

Utilities per month, including electricity, heat, cooling, and water will cost around $76. Internet service is around $54 per month. Transportation on the island costs $1.58 per transit ride or $46 for a monthly bus pass. A liter of gas will run you around $1.34, while a one-mile taxi ride is about $2.30.

For a monthly fitness club pass you will pay around $41 per person, while a ticket to the cinema will cost around $8.44. A meal for two people at a mid-range restaurant will cost around $50, while an inexpensive option will be around $11 per person. The health system may offer free treatment to citizens or permanent residents. Others will need to get private insurance coverage which ranges between $100 and $140 per month for a couple.

The following is a breakdown of estimated costs for two people. The total amount may vary greatly based on clothing and entertainment costs. Your budget may also vary depending on whether you like to eat out often or stay home and cook. As a single person, you can live on around $1,500 per month. Couples can enjoy this incredible lifestyle for about $2,000 per month.

Breakdown of the Cost of Living in Tenerife (Two People):