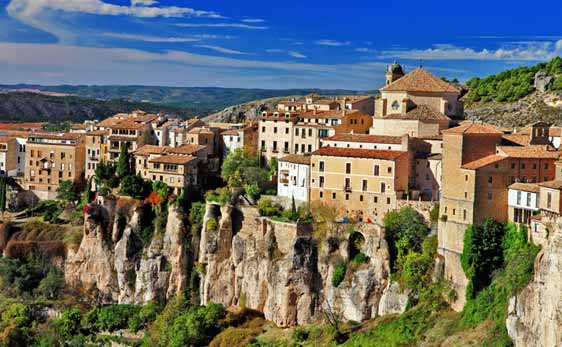 To truly appreciate the beauty of Spain, sometimes you have to venture away from the big cities and popular beach resorts and search for places that make you feel as if you’ve stepped into a hidden pocket of paradise. Cuenca is such a place.

A visit to Cuenca is a return to a simpler, less hurried world. Located in the Castilla-La Mancha region of eastern/central Spain, Cuenca is a small city of around 55,000 inhabitants. It’s positioned between two rivers (the Huecar and the Jucar) in a breathtaking setting at around 3,200 feet of elevation, with the upper old town and newer neighborhoods separated by large, winding gorges. Cuenca and its surroundings are an intoxicating mix of natural splendor, historic charm, fresh mountain air, cultural richness, and affordable livability.

Because it’s on the high-speed Madrid–Valencia train line, Cuenca is convenient to reach but feels a world away from the traffic jams, beach crowds, and bustle of its much larger neighbors to the west and east.

Cuenca is most famous for its Casas Colgadas (hanging houses)—stone and wood buildings that seem to defy the laws of gravity by adhering fearlessly to the sides of the city’s steep cliffs.

These mid-air architectural marvels are just the beginning of Cuenca’s many attractions, however. Here, you’ll also find remnants of an Arab fortress, a stunning cathedral, an eye-popping contemporary art museum, beautiful parks, and some of the most authentic—and delicious—paella in the country.

Wandering through Cuenca is a chilled-out pleasure that forces you to slow down and appreciate the little things: the sound of running water beneath the St. Paul Bridge, the faint smell of distant chimney smoke, the colorful splash of blooming bougainvilleas, the energizing warmth of a sunny day, and the simple joy of exploring streets that all seem to end in another magnificent view across the canyons. Cuenca is more than just a destination—it’s a state of mind.

For expats, one of the main advantages of living in Cuenca is its proximity to Madrid and Valencia—both roughly an hour away by AVE train.  That means quick access to big-city infrastructure whenever you need it—but without all the stresses that can come with living in a large metropolis. There are some exceptional real estate deals available in the 6,600 square miles of Cuenca province too, especially if you’re looking for a more rural property.

Being ‘just around the corner’ from Spain’s capital and busiest travel hub makes it easy to explore the rest of the world from Cuenca. For example, Madrid is one of the best departure points in Europe for a cheap, direct flight to South America. From Cuenca, you can reach Barcelona by rail in five to six hours, San Sebastian in seven hours, and Bilbao in about eight hours. Buses in and out of Cuenca are cheap, modern, air-conditioned, and comfortable.

You’ll find prices for most things in Cuenca (groceries, transport, apartments, etc.) around 10 to 20% cheaper than in the Spanish capital—and those savings are on top of the already low living costs found in Spain as a whole. Choosing to retire in a smaller Spanish city like Cuenca offers both lifestyle benefits and financial pluses.

Being in the central plateau and moderately elevated, Cuenca’s climate is slightly different to that found along the coasts. Between mid-June and early September, you can expect average highs around 80 F with clear days—magnificent summer weather. One interesting quirk of the Cuenca climate is that sometimes, mid-summer temperatures can be warmer at 7 p.m. than at noon.

The city’s colder season runs from about mid-November to the first half of March, with average daily highs below 56 F. Snowfall is pretty rare in Cuenca but occasionally you’ll get light falls for a day or two in January/February. The best way to describe the weather in this part of Spain is ‘pleasant but variable’. Cuenca has four well-defined seasons and plenty of that bright sunshine Spain is famous for.

Cuenca is a safe place: provided you exercise normal precautions, you’ll feel quite at ease in this friendly, traditional city—day or night. Locals go out of their way to make you feel welcome here, even when your Spanish is terrible.

Healthcare in Spain is globally recognized as one of the best (and most affordable) on earth—just one of many reasons this part of the world is so popular with retirees. There is an excellent hospital in Cuenca and several farmacias that sell over-the-counter medications and offer useful advice. The Spanish system of duty pharmacies (farmacias de guardia) ensures that each district has at least one pharmacy open at all times.

The tap water in Cuenca is perfectly safe to drink and no inoculations are required for Spain. Throughout the country, the phone number for general emergencies is 112; if you ever need an ambulance, call 061.

There aren’t many places on earth where you can say that shopping for groceries is one of the highlights of your day but in Cuenca, it’s a real pleasure. The city has several large, U.S.-style supermarkets (Lidl, Mercadona, and Carrefour Express are popular), but for a more authentic shopping vibe, make your way to the centrally located Mercadillo de Cuenca (Cuenca Market).

It has more than 180 stalls, selling everything from deli specialties and farm-fresh produce to household items, clothing, and roasted chickens. It’s a great place to stop for an inexpensive brunch or some decadent cinnamon churros, which come with a bowl of warm chocolate for dipping.

Cuenca neighborhoods are dotted with family-run bakeries, fruit vendors, and small eateries, so inexpensive meals and groceries are always close at hand. Café culture is alive and well here, often extending late into the night. It’s easy to find a yummy, three-course restaurant dinner in Cuenca for $20 to $25, and a cappuccino will only set you back $1.65.

If fine dining is on your agenda, Cuenca won’t disappoint. Visitors are often amazed by how many quality restaurants are scattered throughout the city, offering fresh ingredients, good value for money, and impeccable service.

It’s hard to pick a favorite, but Arte y Solera on Avenida de la Republica is right up there. Red prawn carpaccio, mango gazpacho, black garlic scallops, and seared marinated tuna are just a few of its scrumptious highlights. Taberna Albero, just off the main square, is also highly recommended for its traditional food.

In Cuenca, you don’t have to sacrifice your cravings for Spanish seafood at all; the Mediterranean coast is only 125 miles to the east and Cuenca restaurants have plenty of delicious seafood options to choose from.

One of the best things about life in Cuenca is the sheer number of interesting outdoor activities you can get up to. Jump straight into hot-air ballooning, canyoning, horseback riding, cave exploring, zip-lining, cycling, or kayaking along the rivers. Hike among the stunning rock formations of Callejones de Las Majadas, where the original Conan the Barbarian movie was filmed.

Drive yourself or join a guided tour to Ciudad Encantada (Enchanted City), an area famous for its mushroom-shaped karst formations and photogenic natural scenery; it’s about 45 minutes from Cuenca. Several low-key national parks are practically at Cuenca’s doorstep and will provide all the space and outdoor freedom you could ask for.

Because of Cuenca’s unique location, you only have to step out of your city apartment and walk a few blocks to start enjoying breathtaking scenery and peaceful walks in nature. Just follow riverbank paths or climb up to the ridge-top trails. Wherever you end up, it’s almost certain that impressive panoramic views will be part of the experience.

Things to do in Cuenca, Spain

Cuenca is positively bursting with ultra-cool things to see and do. Here’s just a start:

Walking around Cuenca makes you wonder how the spiritual leaders of past centuries managed to fit so many churches, convents, and other religious sites into one city. But they did—and the pinnacle of their construction efforts is definitely the cathedral in the main square. It is Spain’s first Gothic cathedral and easily one of the most beautiful in Europe.

It’s not just tourists that make a point of venturing across the ancient St. Paul Bridge, just behind the cathedral area. It’s a favored spot for locals too, who are often spotted lingering there and chatting as sunset approaches. At the bridge’s other end, you’ll reach the massive Parador de Cuenca, one of the city’s finest old hotels.

Adjacent to the renowned hanging houses is a museum-on-a-cliff with more than a hundred spellbinding examples of Spanish sculpture and paintings. Its superb vantage point comes with an added bonus: exquisite views across the river from its windows. Cuenca’s Museum of Archaeology and Science Museum are also well worth a visit.

Explore the City by Foot

Although guided walking tours are available, you don’t really need one. Just put one foot in front of the other, grab a map and start exploring. It’s hard to convey just how fun it is to simply wander around this charming medieval city on a sunny day—but it’s truly addictive.