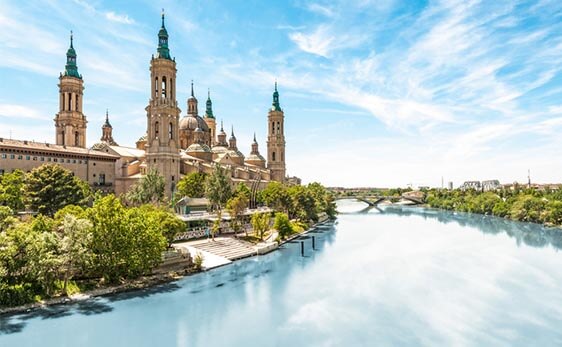 Zaragoza: One of Spain’s Most Overlooked and Underrated Regions

Stunning landmarks, famous folklore, and traditional gastronomy are only a few things that make Zaragoza a small city worth visiting and considering living in. The magical land is set in Spain’s northeast, and Zaragoza is the capital of the Aragon region. The area is one of Spain’s most overlooked and underrated regions. Stretching from the Valencia region in the south to the Pyrenees Mountains to the north, it is filled with national parks, mountains, historic castles, stunning architecture, and Romanesque churches throughout many medieval towns.

The city of Zaragoza, also known as Saragossa in English, first became a settlement by the Iberians in the 5th century BC. Spain’s fifth-largest city rests along the River Ebro. With more than two thousand years of history and one of Spain’s previous kingdoms, it offers some of the greatest artistic and historical legacies in Spain. Archeological remains are a reminder of the grandeur of the city during the Roman Empire era with many public buildings showcasing the influence of Caesar Augustus.

It is unknown why tourists and people considering a move to Spain often overlook the city of almost a million people. The city center is home to a shrine of the Virgin Mary within the Baroque Nuestra Señora del Pilar, the multi-domed Basilica. Some say that it is the oldest shrine in the world dedicated to her. The Basilica is located along a famous pilgrimage site that is actively debated to be the most or second most popular pilgrimage site in Spain. The debate is between Zaragoza and Santiago de Compostela.

Zaragoza is also home to the 11th-century Aliaferia, a Moorish Palace built during the Muslim occupation of Spain. Gothic and Islamic architecture are sprinkled throughout the center. The 12th-century Cathedral of the Savior is also worth visiting as it, along with other Mudéjar-style landmarks, part of the UNESCO World Heritage Sites.

The strategic location of the growing city makes it an ideal place for those that enjoy visiting larger cities and beach towns but don’t want to live in them. Zaragoza is located halfway between Barcelona to the east and Madrid to the southwest. You can drive to either city in three hours. Alternately, there are several buses and trains you can take, bringing you right into the city center if you don’t want to drive. From Zaragoza, you can easily reach the Pyrenees Mountains or drive to the small country of Andorra in about three-and-a-half hours.

The retirement process in Spain is generally straightforward. However, it can be a little time consuming, so you will need to have some patience with it. There are several visa options available. You will need to find the one that suits you best, get all the paperwork together and file for the visa. Once you have your visa, the fun begins and your new life in Spain will start. Of course, things are a little easier if you are moving with your spouse or significant other; however, many single people move to Spain as well.

Before you move to Spain, you should have a basic knowledge of Spanish. Castilian Spanish is the official language in Spain; however, German, French, and English should be understood in most hotels and tourist areas. The surrounding areas you will hear Galician, Catalan, and Basque spoken. Smaller cities and towns throughout Spain may not have any English-speaking people. There are several Spanish schools throughout the city to help you learn and improve your Spanish skills.

Meeting friends is going to be another task that needs to be high on your priority list. No matter where you live, you won’t be happy if you don’t make friends. You can join the English Speakers in Zaragoza Facebook group to start getting to know what is going on in the city. Internations.org and Meetup.com are both excellent platforms to use to find activities with like-minded people. Not only will you be meeting new people, you will also be enjoying some activities you already like or discovering some new ones.

Traveling to other cities and towns throughout Spain and neighboring Portugal, Andorra, and France are very easy. If you’re like me and don’t want to have to buy a car, you can still easily travel here. You can take a train or bus to countless destinations. Here are just a few examples for you from The Train Line website.

The average journey from Zaragoza to Madrid will take about one hour and 45 minutes. The cost is €22.75 ($24.66), with your choice of approximately 21 trains per day.

The average time to get to Barcelona from Zaragoza by train is one hour and 45 minutes. There are approximately 25 trains per day with prices as low as €14.

The average journey between Zaragoza and San Sebastián–Donostia is five hours and 58 minutes. The five trains per day average €12.70 ($13.76) per trip.

Travel by train from Zaragoza to Montpellier, France, in under five hours. You can purchase a ticket for as little as €23 ($24.93).

Like every city in the world, the price of real estate varies. Location, square footage, upgrades, and more are always part of determining the price. What one person thinks is ideal and a great price may be too small to some or overpriced to others. When looking at property in Zaragoza, you need to be aware that it can get cold in the winter months and many older buildings will not have heat. Keep in mind, most times in Spain you will need to pay two months deposit, one-month agency fee, and the first-month rent prior to signing the contract to move in. Here are some samples of the real estate prices for apartments that are for rent in Zaragoza.

If you prefer to purchase a property and you love a big DIY project, you can purchase a flat for under $45,000. I have seen a few listed for under $20,000; however, they would need to be completely renovated from top to bottom.

If you are looking for something that has already been completely renovated in the historic center, you should budget for at least $160,000. A little further outside the city center, you can find cheaper flats for sale.

Things to do in Zaragoza, Spain

This underrated city in Spain has numerous things for tourists and locals to do. The city is full of museums and historical architecture ranging from the old Moorish fortresses and Roman Theatres to updated markets and new art galleries. Here are a few places you must visit in Zaragoza.

The Pilar Basilica, for short, is one of the vital Marian sanctuaries in the Catholic realm. It is believed that the Virgin Mary appeared here on January 2nd, 40 AD, and left the pillar behind. Over the centuries, chapels and churches were built surrounding the area leading to the grand Basilica being constructed.

The Catedral del Salvador de Zaragoza is also called La Seo. It includes many elements from Baroque, Gothic, Mudejar, Neoclassic, and Renaissance times. It is believed that an original mosque was built sometime before 718 in the same location. Then the Romanesque cathedral began construction in 1140. Followed by The Gothic-Mudéjar Cathedral (1318), Renaissance (1403), and many years of de-construction and re-construction ending with the most recent restoration being completed in 1998. It is part of the World Heritage Site Mudéjar Architecture of Arago.

The fortified medieval Islamic palace dates back to the 11th-century when the area was under Abu Jaffar Al-Muqtadir rule. The palace was then home to the Banu Hud dynasty. It is considered one of the artistic jewels of the Muslim presence in southern Europe.

Mercado Central first opened in 1903. The grand space of archways and columns is filled with stalls selling everything from fruit and vegetables to meat and seafood. You can also purchase a variety of baked goods, olive oils, and cheese. It is the perfect place to pick up groceries for the week or to prepare for a picnic in the park.

Puente de Piedra, or stone bridge, is one of the most recognized features of Zaragoza. Initially, a wood bridge was built here back in Roman times. The one you see now was built in the 15th century and has had many updates over the past centuries.

Currently used as Zaragoza’s most prestigious exhibition spaces, La Lonja was built between 1541 and 1551. Influenced by Mudéjar and Florentine architecture, it is a superior example of the Renaissance style within the city.

Whether you are considering moving to Zaragoza or just going to enjoy the fascinating history and architecture, you won’t be disappointed with the time you spend in this city.